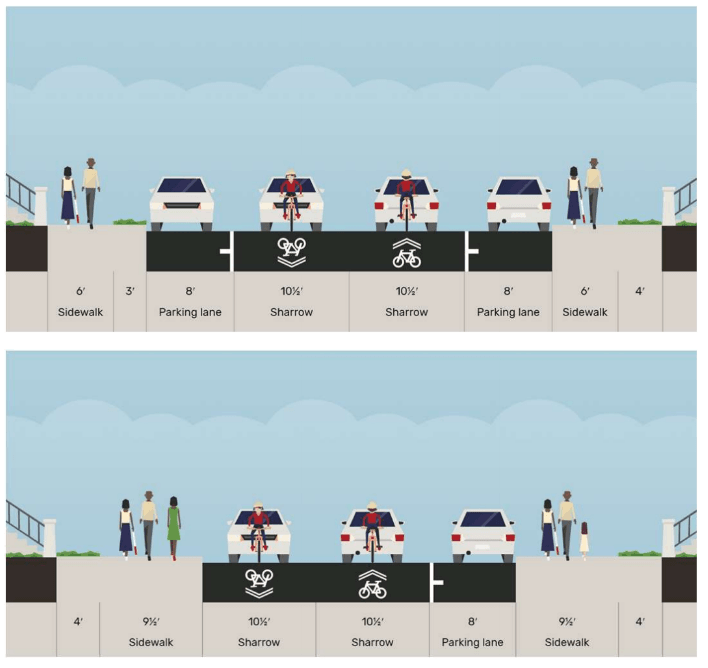 Option A (top) and Option B (bottom) as presented by Alta Planning and Design. Courtesy graphic.

Fourteen months after the town of Carbondale contracted Alta Planning and Design (Alta) to redesign Eighth Street between Village Road and Main Street, Trustees will have the opportunity to approve a plan at their next regular meeting on April 13.
According to Public Works Director Kevin Schorzman, the Eighth Street corridor was identified as a priority for improvement in 2016 by the town’s Bike, Pedestrian and Trails Commission (BPTC). Alta was directed to gather ample public input throughout their process, which began with a table to interface with the community at First Friday in March 2020. Once COVID hit, they adapted by circulating an online survey. Later, the public was given an opportunity to comment on three options mapped online and demonstrated on the street throughout the fall.
Through that process, Alta developed two options that were presented to the BPTC on March 1 along with a window for public comment. Both options have bicyclists sharing the road with motorized vehicles. The major difference is that Option A (with an estimated construction cost of $500,000) retains parking on both sides of the road with six foot sidewalks and eight foot parking lanes. Option B (costing roughly $685,000) sacrifices parking on the east side of the street (approximately 50 spaces) for nine foot sidewalks on both sides. Each design incorporates green buffer space and, according to Schorzman, makes full use of the town’s right-of-way.
Residents along 8th Street expressed concerns over losing parking, landscaping, and mature trees to the town’s right-of-way. Neighbor Holly Buell shared with The Sopris Sun that the estimated cost to relocate her sprinkler system and garden beds, if either option is chosen by Trustees, approaches $8,000. Moreover, Buell — who holds a master’s degree in architecture and studied urban planning — is concerned that neither option addresses her fundamental concern as a mother of a young child living on that street: excessive, speedy traffic.
In a letter to Trustees, shared with The Sopris Sun, Buell cites the National Association of City Transportation’s determination that the larger a driver’s “visual cone” is, the faster they will feel comfortable driving. Rather than 10.5 foot vehicle lanes suggested by Alta in both options, Buell suggests hugging closer to the minimal standard for emergency vehicles of 10 foot driving lanes and 7 foot parking lanes with parking on both sides of the street to narrow that “visual cone,” thus prompting drivers to slow down.
Dismayed by the outcome of the BPTC meeting, with Option B recommended unanimously to Trustees after Option A failed by one vote, Buell has circulated a petition among neighbors that retains parking and reduces the number of trees to be cut down by using less of the town’s right-of-way. As of Monday afternoon, the petition had gathered 110 signatures, an achievement that Buell attributes to the collective effort made by her neighborhood.
“We fully understand that there are problems with Eighth Street,” says Buell. “We fully acknowledge that something needs to be done. We want something done that fits our community’s needs … I don’t really feel that’s what Alta offered.”
Eighth Street is unique within town as the only street that connects with Highway 133 on both ends. Its function as a bypass was exemplified last year when a large sinkhole suddenly spurred closures for northbound traffic on the highway near Main Street. The nature of Eighth Street is also notably different on either side of the Rio Grande Trail, with many large trucks turning onto Merrill Avenue north of that intersection.
Shorzman encourages anyone who is interested in the topic to participate or at least tune in for Tuesday’s meeting. “The whole goal from my perspective has been to make sure the public is aware of this project and is engaged at this point in time. This is the time we can have debates and decide on trade-offs. I didn’t want to have these discussions when bulldozers sit ready.”