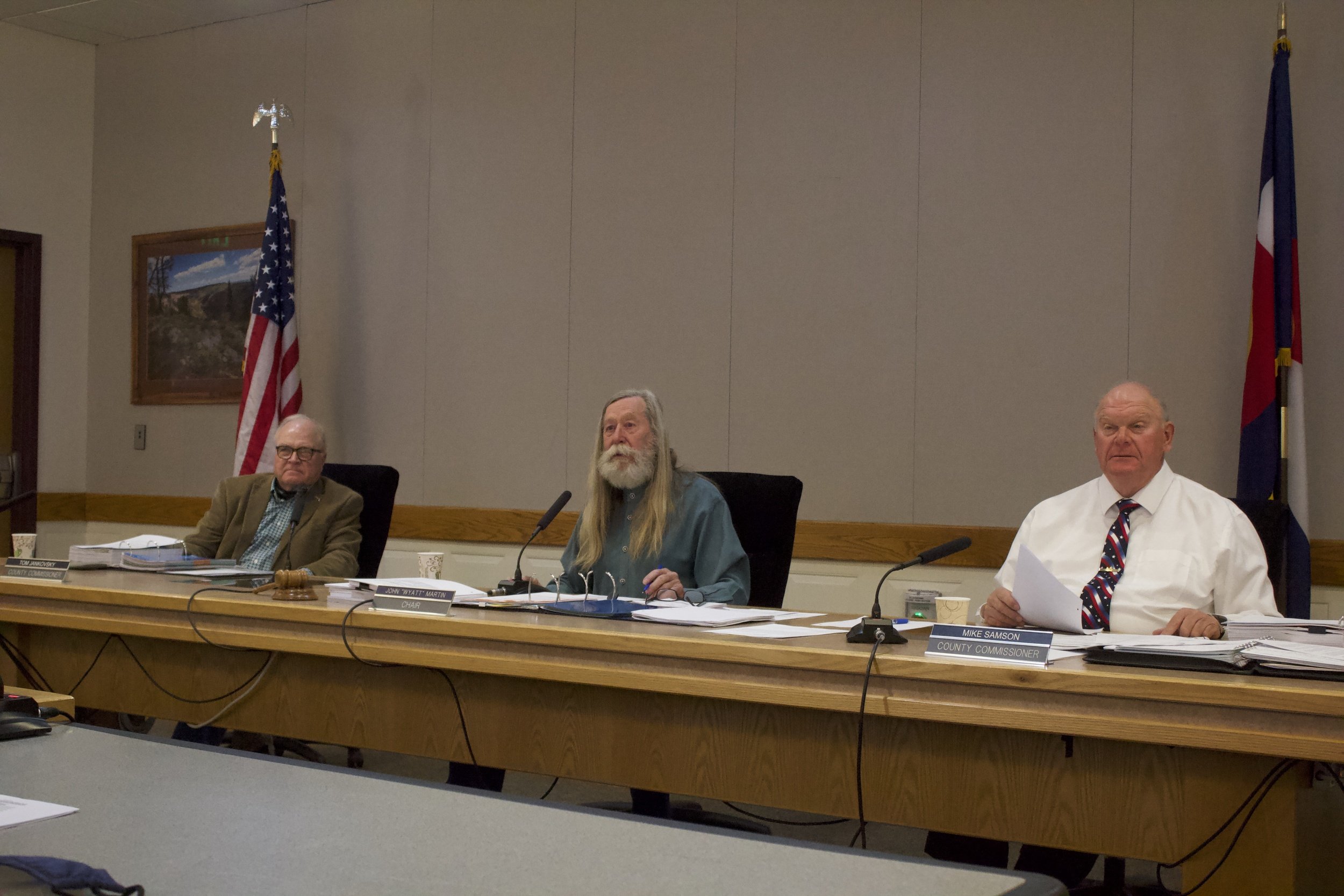 The three Garfield County Commissioners tackle yet another agenda on April 5. Photo by James Steindler.

The Garfield County Board of County Commissioners (BOCC) meets regularly on the first three Mondays of each month. During these meetings, the commissioners consider requests brought by the public and various institutions throughout the county. The requests often come down to funding which the commissioners have the authority to approve or deny.
The commission also has the authority to make decisions regarding water, public health, fire safety and more.
On April 5, the commissioners heard from folks regarding several proposals and informational pitches. Some of the highlights are:
Prior to jumping into the day’s agenda, the panel invited anyone not on the agenda to make comments. One such comment prompted a discussion regarding cleaning up the land east of Walmart in Glenwood Springs as well as an area of Hubbard Mesa on the Roan Plateau.
As part of the agenda, the town of Parachute requested a 50% decrease in landfill costs for the town’s annual community clean-up. According to Jankovsky, the same was done for the town of Rifle before.
Heather Grant with Rifle Animal Shelter requested and was approved for $170,000 which she said will increase the shelter’s capacity by 25%. Colorado Animal Rescue was also approved for a $250,000 discretionary grant.
Ordinance 2021-1, prohibiting the use of fireworks within unincorporated Garfield County, was adopted. Glenwood Springs Fire Chief Gary Tillotson appeared and expressed his support of the ordinance stating, “Conditions are dry and probably going to get a lot worse.”
Garfield County Facilities Director Frank Coberly requested $60,000 to replace the elevator generator at the county courthouse. The request was approved for funds to be transferred from the county’s capital budget.
Garfield County Sheriff’s Office (GCSO) was granted a $20,000 supplemental budget on top of what they had budgeted for the year. The additional funds will go toward improved body armor for deputies. “We typically budget each year to replace a fair amount of body armor,” said GCSO spokesperson Cathy Redman. “For whatever reason, we were caught off guard this year and needed to replace about 55 sets of body armor.” The additional funds will come from the county’s general fund reserves. Commissioner Tom Jankovsky pointed out to Redman, “You really missed it here – you missed it by about 40%, budget-wise.”
Subsequently, the board approved a contract with Curtis Blue Line, not to exceed $50,000, for the aforementioned body armor.
A request from the Lower Valley Fire District in Fruita for Garfield County to donate one of its decommissioned sheriff patrol vehicles was tabled to be revisited next week. Commissioner Jankovsky stated, “Garfield County is no longer in a position where we can just donate vehicles. We’re not a wealthy county anymore; the governor and state legislature have done a good job of taking that away from us.”

Presentations
John Fox-Rubin and Barbara Freeman, on behalf of the Bell Policy Center, presented to the commissioners regarding state Senate Bill 21-148, “Creation Of Financial Empowerment Office.” The duo agreed that there is a need for financial education and protection in the local community. “I’m somewhat dismayed with the state legislature because they have done everything they can to hurt rural Colorado,” said Jankovsky. The commissioner added, “We’re going to have 1.2 million undocumented immigrants coming across our border and one or two thousand if not more are going to end up in these two valleys and it just puts more stress on our local government.” This assertion combined with what he considers pressure from the state government led him to conclude, “I don’t want to see another state office, I guess – that’s just the Republican in me and the Libertarian in me as well.”
Commissioner Mike Samson then brought up topics ranging from the recent reintroduction of wolves to oil and gas legislation coming from the state level. Regarding national politics, he stated, “Our nation cannot continue to exist the way we are headed with the present administration.”
Chairman John Martin said that he would like to wait for the long bill to “drop” and follow up with a discussion then, “To see if we can even participate, based on our funding.”
Executive Director Paula Stepp with Middle Colorado Watershed Council presented on water quality monitoring. As a result of the fires last season, this “would look at the impacts of water coming off those burn scars.” Stepp added, “We’re looking at the health and safety of our citizens, we’re looking at infrastructure in case of debris flow, the public water systems and the agricultural community, and trying to understand their risks.”
Veterans Services Officer Dave Pruett gave an update regarding VA services and needs.

Applications approved
The commissioners approved a limited impact application for Pivot Energy Solar Co. out of Denver to erect a large solar farm about three miles west of Parachute.
Lastly, a limited land use permit to replace a 60 foot telecommunication tower with a 80 foot tower near Sunlight Mountain Resort (SMR) was approved. Jankovsky, a SMR shareholder, recused himself because the applicant pays a lease to SMR.