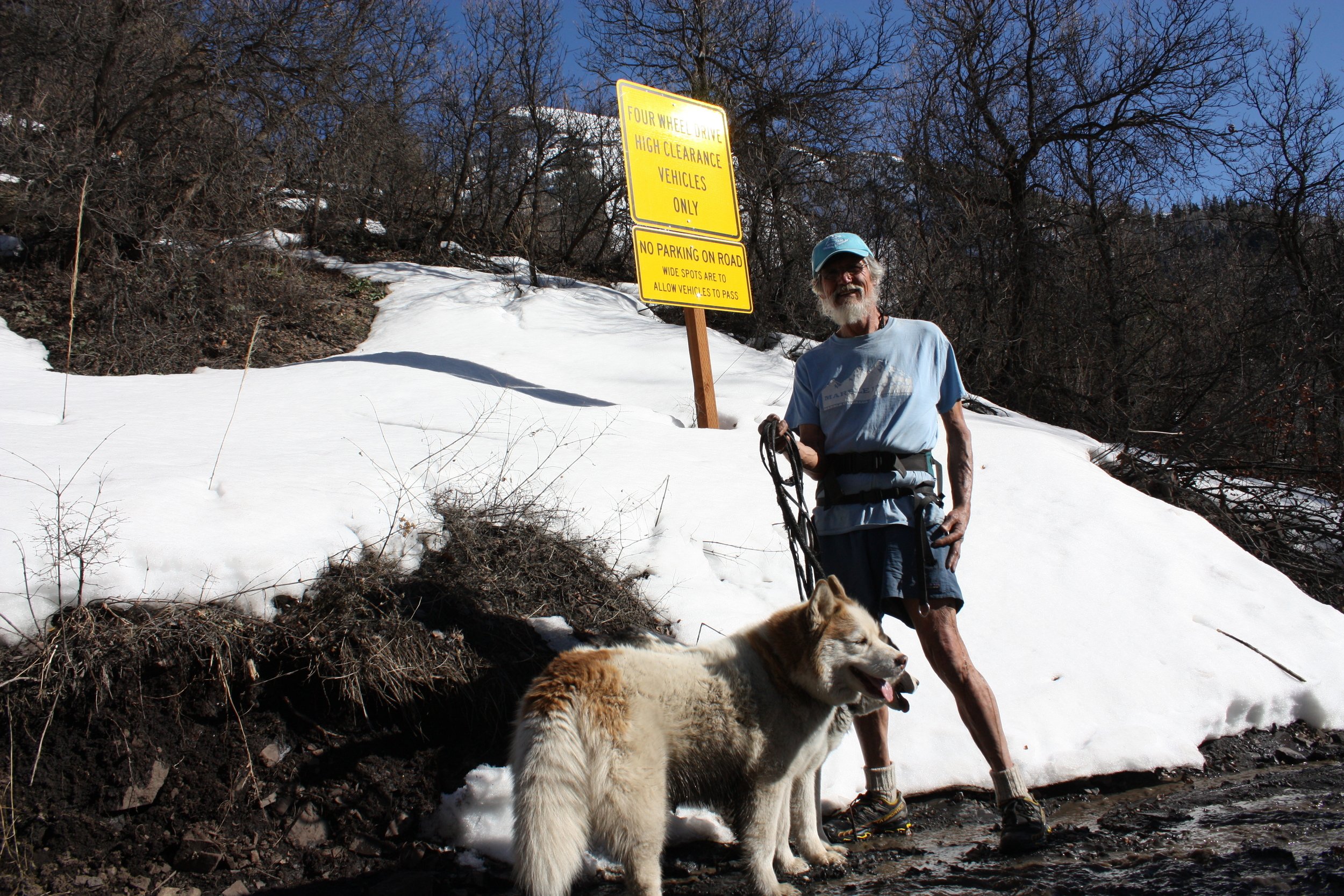 Alex Menard and his dogs stand by one of the few signs regarding use of the Lead King Loop. Photo by Kathleen Shannon.

Sitting on the porch of a small cottage just beyond Marble town limits, I enjoyed a warm spring day, feeling that I was truly in the wilderness. Local residents are trying to soak up that feeling before the tourist season arrives, and, along with it: ATVs, or all-terrain vehicles, which bring noise, dust, erosion, and safety concerns.
Marble resident Alex Menard and I hiked up to meet Teri Havens at her cottage. She’s owned the lot since 1995 and has seen a lot of changes since then. “I bought property on a Jeep trail, I don’t expect it to be closed. I expect some traffic. It seems like every year there’s an exponential increase in the volume of vehicles and the noise.”
When a single ATV began climbing the steep portion of road – known as Daniel’s Hill – Havens paused, and a flicker of tension moved across her face.
“It isn’t just because I have a house here. I really care about the backcountry and the wilderness,” Havens said. “That’s why we live here, right? It’s not just here, it’s what’s back there,” she said, gesturing behind her toward the White River National Forest.
This part of the forest can be accessed from Crested Butte via a rough and sparsely-used route. The more popular entry is through Marble. Visitors wanting to drive ATVs in the forest must first navigate the narrow streets of Marble to find parking, often with a truck and trailer. Once they unload, ATV-users drive from their parking spots, past Beaver Lake – managed by Colorado Parks and Wildlife – on to the Lead King Loop: a 13-mile road that is partially managed by both Gunnison County and the National Forest Service. That loop leads users along a narrow road and passes the now-famous Crystal Mill. Ultimately, Marble acts as a bottleneck for recreation traffic.
With so many agencies overseeing parts of the area, there are many potential avenues for change as well as disagreement. In fact, the Lead King Loop working group was established specifically to bring all these agencies together: a feat that Marble Town Manager Ron Leach calls a “minor miracle.” At the April 1 town meeting, it was clear that everyone sees increased ATV-use as a problem, but there’s disagreement on the best solution.
One camp, including Menard, wants to ban ATVs altogether. At the meeting, he lobbied for hikers’ rights. “If the first thing you have to do is grab your kids and your dogs and run to the side,” he said, “it’s not conducive to pedestrianism.” An ATV ban issued by either Marble or Gunnison County could effectively stymie ATV use: the first would eliminate the ability for ATVs to get from town to the Lead King Loop and the second would eliminate road access to the National Forest.
But not everyone wants a flat-out ban. A permit system is an option that the Forest Service has implemented in other local over-use situations, like the Conundrum Hot Springs. However, that’s not typically the first approach, said Shelly Grail, recreation manager for the forest. She said that hearing all voices is vital. “I can’t stress enough how important it is that we’re working together to make sure we’re on the same page and expectations are clear.” She foresees 2021 will be a year of increased education and enforcement.
Marble Mayor Ryan Vinciguerra hit those points hard at the town meeting. Enforcement in town has always been a challenge, as Marble sits in a remote corner of Gunnison County, with more than 110 winter road miles separating the town from the more populous part of the county. The Sheriff is planning to station a new deputy in “the area,” as the portion of the county including Marble and Somerset is known. But, that person has yet to graduate from Law Enforcement Training and won’t be stationed until August.
The National Forest Service could also provide additional enforcement, but its budget for more officers is low. Marble Trustees voted to pitch in $3,000 towards the County’s $10,000 effort to help finance a Forest Service Officer assigned to the Marble area at least part-time. Forest Service Officers don’t have the authority to make arrests, but they can ticket for noise, parking, and other violations.
Education is another piece that Marble hopes to gain headway on this year. Mayor Vinciguerra talked about volunteers manning a kiosk in town to answer questions from tourists. Increased signage is low-hanging fruit, as well.
After that meeting, Havens said she feels “hopeless” that Marble will take significant action this year. The discussion at the meeting pushed her from supporting a permit system to wanting a ban. Menard was also disappointed and noted that the town may have a conflict of interest: Mayor Vinciguerra also owns Slow Groovin’ BBQ and profits off of more visitors.
On our hike back down Daniel’s Hill, Menard fielded questions from a couple hiking and a man driving a van with California plates. They all wanted to get to the Crystal Mill, but the trail is still covered in snow. It’s no wonder there’s been a sense of urgency among the Marble community to take action before the tourist season begins. “This is the time,” Havens said. Then, after a pause, “maybe it’s too late already.”