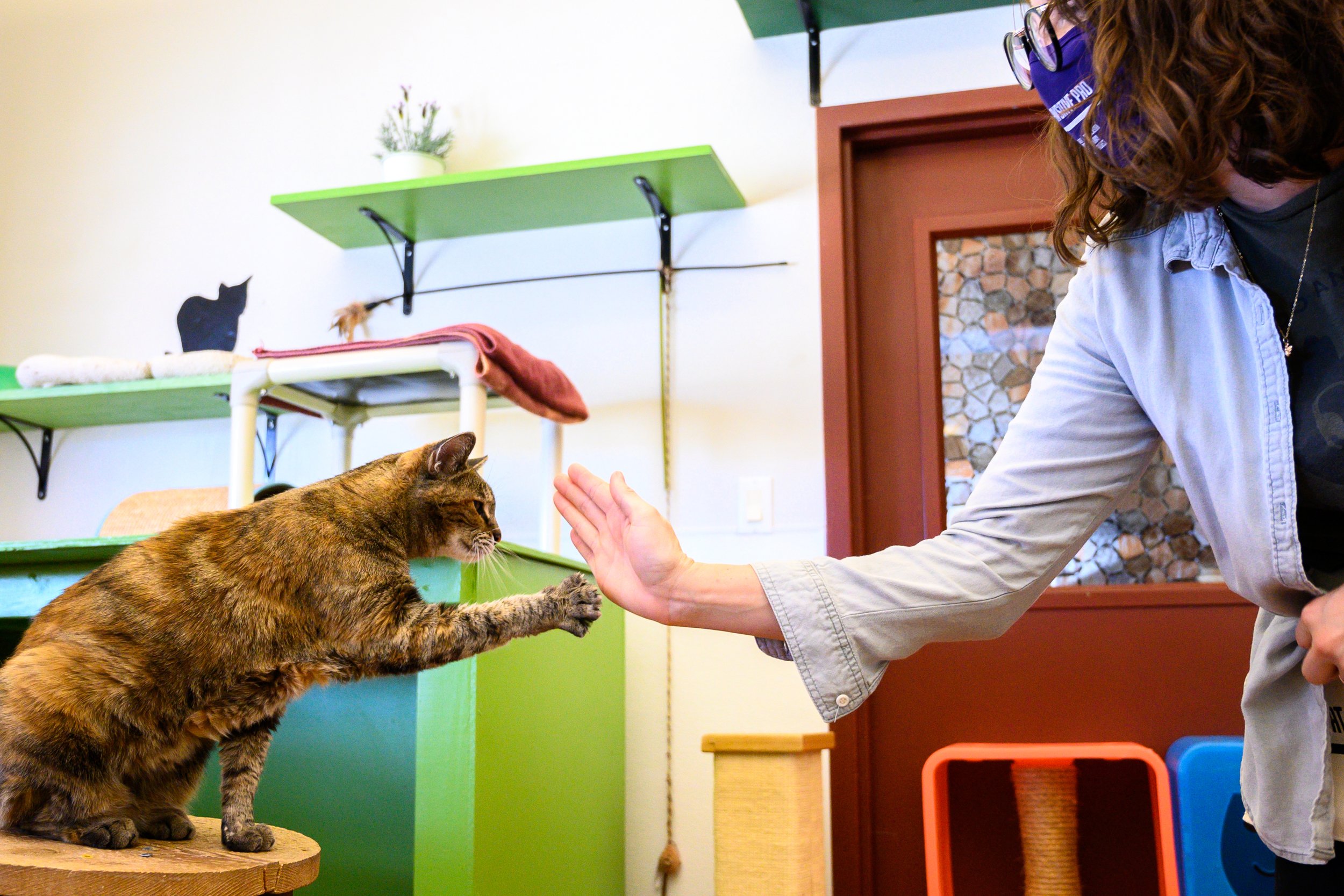 Little One reached her paw out, claws poking through her brown tabby fur, until it momentarily rested on Keira Clark’s outstretched right hand. Keira squeezed the device resting in her left hand and a sharp click shot from it. Right after, she set a chunk of tuna next to Little One. “Good high five!” Clark exclaimed as her feline friend licked her reward.
Clark, Programs Director at Colorado Animal Rescue (CARE) and Colleen Hickman, the Feline Specialist, began training cats in this manner in February 2021. They were one of eleven animal welfare organizations selected to be a part of this semester’s Jackson Galaxy Cat Pawsitive Pro Training Program. Jackson Galaxy, the “Cesar Milan of the cat world,” Hickman said, worked with a team of feline behavior experts to develop the training protocols. Working with these behavior experts and using a clicker, a small plastic device that makes an audible click when pressed, the CARE team worked to mark, and subsequently reward, desirable behaviors. “It has been as much of a learning experience for the humans as it has been for the cats,” Hickman remarked.
With shier and more fearful cats, the training ranged from clicking when a cat made eye contact to teaching them to “nose-boop,” or touch their nose to a specified target — in this case a cork on the end of a stick. Hickman explained how this can help cats build confidence while also teaching them that interacting with humans is rewarding. She went on to say that with cats who are already more social, they “can do some of the more ‘flashy’ behaviors if you will, like high-fives and going through hoops.”
Clark added that there are actually some practical applications too, like getting a cat to enter its crate or teaching it the ‘place’ command, where it stays in the same place until released.
While one black cat, Litten, worked on jumping through hoops and a brown tabby, Little One, worked on high-fives and nose-booping, Clark reminisced on another cat who had worked in the program, Jazz. At first he wouldn’t come out of his box, but by the end of his time at CARE he waited at his door, meowing, asking for training. “These cats are suddenly asking for the attention … you could actually see the gears turning. It was really amazing and put a huge smile on my face because people think they’re not trainable like dogs, but they are! They’re so smart! You might need to train them a little differently [than dogs], but they’re highly trainable.”
“It’s all about doing things on their terms,” Hickman noted as Mamba, the orange tabby, refused a smorgasbord of options. “While one day they might love tuna, the next day that may have completely changed.” Mamba eventually took a mild interest in string cheese and emerged from her cubby.
Clark acknowledged that regardless of a cat’s level of performance while training, the ultimate goal of the program is not only to get cats adopted, but also offer mental stimulation while they’re at the shelter. Despite the program officially ending April 30, Clark and Hickman plan to continue integrating what they learned from the past months into daily life for cats at CARE.
“The whole point of the program was a stepping stone,” Hickman said. “We already have a really great enrichment program which our volunteer staff helps carry out, where every cat is assigned daily enrichment. That’s anything from cat grass, to grooming, to being read to, to treat puzzles. But then the training is the next step to get to that mental place where they are then challenged.”
“We don’t want this to stop, it’s such a huge benefit for everyone!” finished Clark.