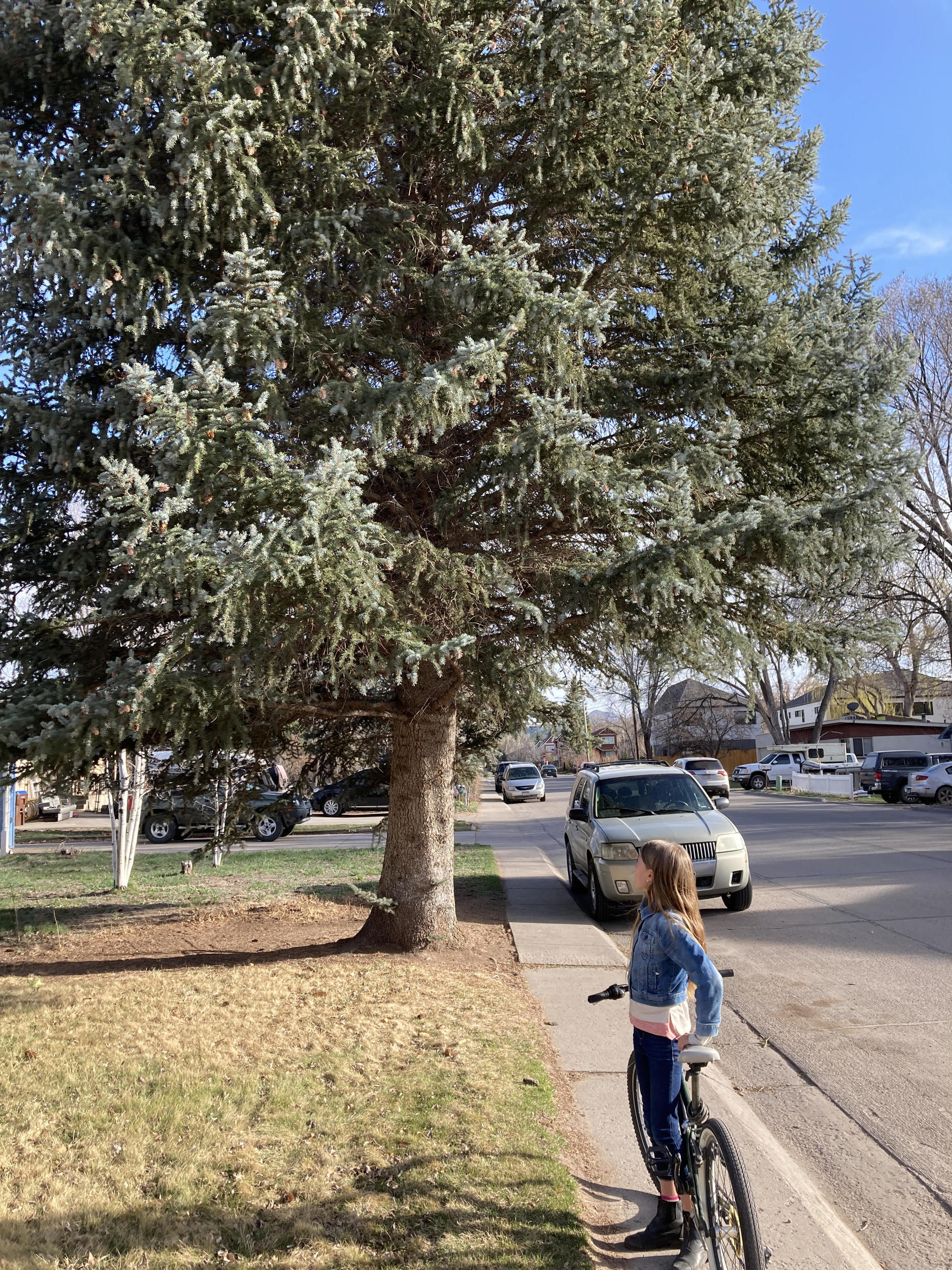 Kumi joined other pedestrians on a tour of Eighth Street's mature trees. Photo by Lisa Dinardo.

Carbondale’s Board of Town Trustees met on Tuesday, April 13 for their regular meeting. All trustees were in attendance.
The consent agenda included “accounts payable” totaling $456,761.65. Items of major expense were $97,500 for the town’s share of repairs on the athletic track at Carbondale Middle School, $59,539 to cover two payments to Gould Construction for the wastewater clarifier project, $51,334 for March trash service, $43,750 refunded for an erroneous sales tax payment received, $32,240 for rebuilding the conveyor system on the street sweeper and $6,925 for four bear-proof trash cans.
Additionally, approval of the consent agenda granted permission for summer street patios to several downtown businesses. Wednesday-through-Saturday Main Street closures begin May 1 and continue through October 15. Thunder River Theatre Company and Pop’s Liquor were approved for liquor license renewals. Sopris Labs, a retail marijuana facility, was granted a renewal for manufacturing infused products. The town joined an intergovernmental agreement for mosquito control with Glenwood Springs, Rifle, Silt, New Castle and Parachute.
During trustee comments, Lani Kitching encouraged everyone to consider attending Senior Matters’ “Reopening Our Lives” conversation with Dr. Brooke Allen on April 20 at 3:30 p.m. Luis Yllanes stated that the Public Art Commission is preparing for new installations around town and a June 30 reception. Regarding the ongoing Francisco case, Yllanes expressed dismay, “it’s an injustice I can’t remain silent about.”
New York Pizza was approved for a full liquor license. The restaurant’s owner Kevin Jones told Trustees that his expectation is they will primarily sell beer and wine, like at their locations in Aspen and Basalt.
Parcels three and four of the Thompson Park subdivision, west of the historic Thompson House Museum, were approved for construction. This includes 13 residential units: seven family homes on parcel four and four multi-family triplex buildings totaling six units on parcel three. The approval came with increased fees recommended by staff and a sidewalk easement along Jewell’s Lane. Efforts will be undertaken to minimize the effects of construction on the Thompson House Museum, and the deed-restricted, affordable housing units planned for parcel three will receive their certificate of occupancy before the market-rate units are granted theirs.
The meeting concluded with a discussion of the Eighth Street corridor. Chloe Ward with Alta Planning and Design reviewed two options presented to the Bike, Pedestrian and Trails Commission (BPTC) on March 1, plus a third option assimilating BPTC’s comments into their preferred option. Ward revealed that the changes to Option B, already the more expensive of the two, would increase the cost by roughly $100,000.
Before turning to public comment, Mayor Dan Richardson made clear that whatever option is selected will provide guidance and be adjusted according to the town’s needs and restraints. Over a dozen people commented on the project.
Despite disagreements, an overtone of respect, gratitude and recognition predominated the discussion. Eighth Street neighbor Jillene Rector began by stating “You’ve done so well listening to us. I just want to thank you.” Neighbor Brian Hightower suggested it’s “privileged of a position to suggest that families don’t need the parking,” calling it “untenable” that Option B would remove approximately 50 spaces from the east side of Eighth Street. Three members of the Carbondale Age-Friendly Community Initiative spoke to the importance of this corridor to many seniors, some of whom ride tricycles and are hearing impaired. The BPTC was called “visionary” for choosing an option that emphasizes walking and “moves people away from dependency on cars.” Meanwhile, nine foot sidewalks was lauded as excessive. Many people asked that mature trees be kept living. Some neighbors expressed concern over the cost, veering toward $1 million with the suggested, adjusted option.
Toward the end of the public comment period, former-mayor Michael Hassig dropped in to offer sage advice. He suggested that the substantive decision for the evening was to eliminate parking or not. As a resident that lives a block from Eighth Street, Hassig offered “I would concur with other speakers and neighbors who live on that street.” As a design professional actively involved in bidding costs, Hassig warned that he’s “completely skeptical” of the cited costs and wouldn’t be surprised if the project came in 50% more expensive.
Following public comment, Mayor Richardson affirmed, “We’re certainly not going to resolve everything tonight” and asked that the board provide guidance on the parking issues, “a threshold question.” Several trustees called Option B a “non-starter,” for reasons of parking, cost and overall impact. Ultimately, Option A was chosen to guide the process forward. Trustee Ben Bohmfalk remarked that it is unusual for the board of trustees to diverge from a commission’s recommendation, but reminded participants that Option A failed by one vote at the BPTC meeting.
The finer details of lane widths, consistency, and buffer composition will continue at the trustees’ next meeting.
From the town’s weekly report:
Free COVID testing site remains in operation behind Town Hall. Website to reserve testing: rfvcovidtest.com
Town ditches turn on April 15. Elm trees with roots growing in Ella Ditch, behind Sopris Elementary School and the Orchard Church, were removed. The upper portion of Carbondale Ditch was turned on April 5 to supply water to the RVR golf course. A newly lined ditch section there is performing well.
Parks and Rec. is hiring for seasonal work including lifeguards, water safety instructors, a recreation assistant for summer programming and a group fitness instructor.
Planning and Zoning meets on April 15 for two continued public hearings: an above-garage ADU in Colorado Meadows and a Rezoning, Administrative Site Plan Review, Preliminary Plat and Special Use Permit for ANB Bank to build a new bank near City Market.
Comprehensive plan update process begins in May. Familiarity with the existing 2013 Comprehensive Plan is recommended to interested persons