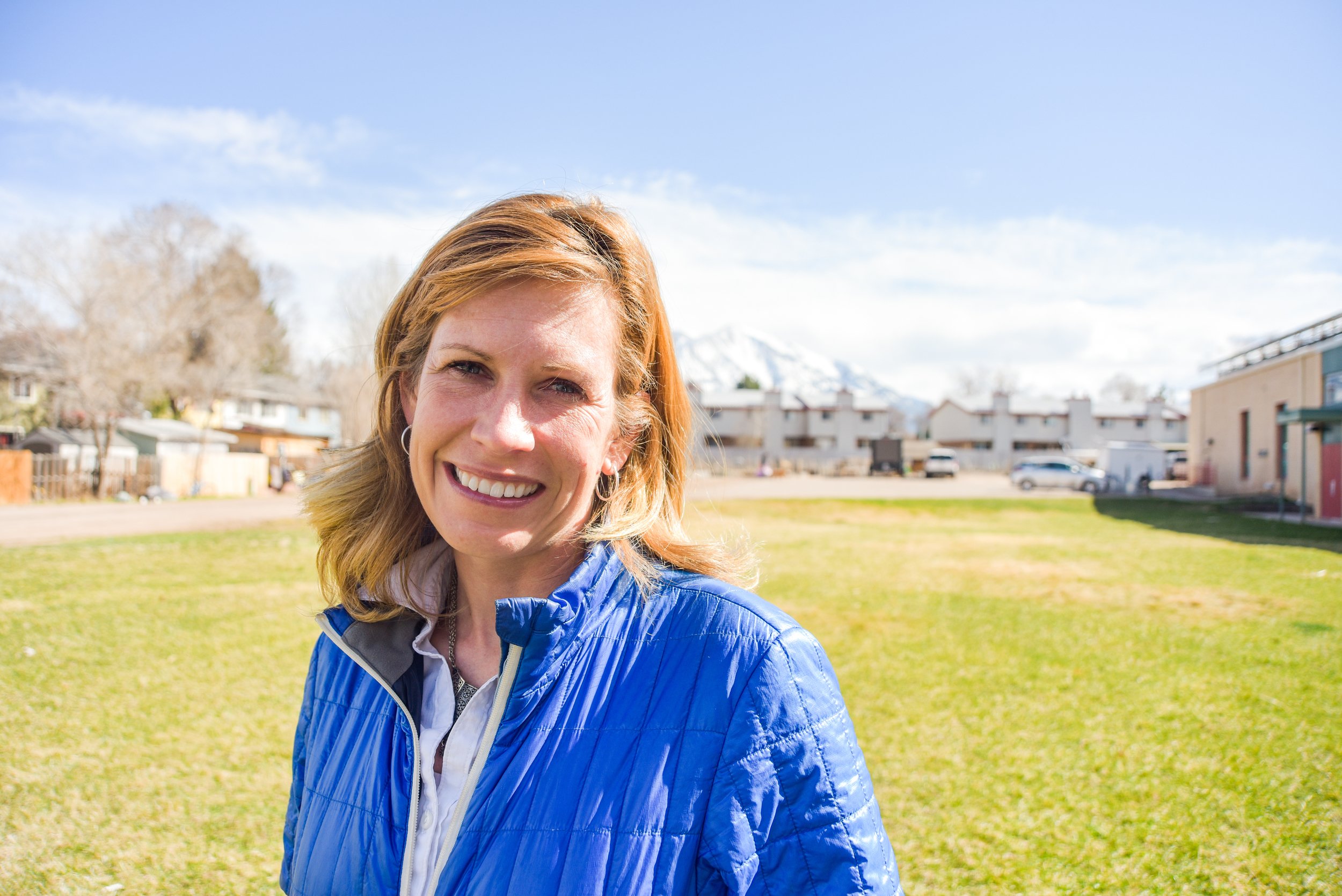 Megan Baiardo, a Carbondale resident and current Assistant Principal at Basalt High School, will begin her duties as the new incoming principal at RFHS in August. Photo by Jeanne Souldern.

The first thing you notice about Megan Baiardo is her smile and her warm, friendly manner. After a lengthy conversation, you leave with a better understanding of the 20-year educator and school administrator who is confident, thoughtful and dedicated to the students she serves.
In March, the Roaring Fork School District (RFSD) announced Baiardo was hired and would be assuming duties as Roaring Fork High School’s (RFHS) new principal in August. The announcement was met with criticism by some Carbondale community members, not for who was hired but for who wasn’t. Letters to the editor, appearing in The Sopris Sun, voiced concerns about RFSD’s decision, pointing to the need for continuity and stability within the RFHS community, given the fact that the school has had multiple principals in just a little over three years.
Baiardo hopes to ease some of those concerns by arriving to the position with four years of RFSD leadership experience as assistant principal at Basalt High School. When the position became available at RFHS, Baiardo reflected, “this is my opportunity to be in the community that my kids are going to graduate from and in the community of so many people that I interact with on a daily basis.”
In 2017, when her husband Jonathan got an electrical engineering job in Aspen, they moved to Carbondale where their two daughters, Gianna and Lili, now attend Crystal River Elementary School.
Why Carbondale, as opposed to anywhere else in the Roaring Fork Valley? “We liked the downtown in Carbondale and the way it pulls off the road, you don’t drive by it, you stop in it,” she said.
Moving to Carbondale, Baiardo recalled, “I knew I wanted to be in leadership that was more administrative than the instructional coaching, so I applied for the assistant principal job at Basalt.”
Working at Basalt High School has not been easy. In her first month there, the school community dealt with the suicide of a student. The Lake Christine fire happened that following summer. And, in her second year, two other students were tragically lost.
According to Baiardo, the topic of student mental health issues is paramount within schools. She explained, “I think it’s being addressed really wonderfully. Our work is not done, but I look at the support for our students in that realm in this community, and I am awestruck. And it has gotten better since I started four years ago.”
Some credit, she says, goes to Colorado Department of Education grants, which provide funding for a prevention specialist who works with RFHS students. Additionally, Aspen Hope Center provides a full-time clinician at all three high schools.

Explaining the importance of solid relationships with staff, Baiardo says, “The three biggest things you really have to focus on with a staff is building trust, offering transparency, and opening up communication. Those three things are critical to a strong working-relationship where teachers feel supported.”
Reflecting on her personal educational journey, Baiardo focused on geological engineering while in high school. During her freshman and sophomore years of college, she participated in the Society of Women Engineers (SWE). An educational nonprofit founded in 1950, SWE is the world’s largest advocate for women working in engineering and technology.
She attended the University of Wisconsin at Madison, earning an undergraduate degree in secondary science and earth and space science. In 2005, she completed her Master’s in Curriculum, Instruction, and Assessment through an accredited online program at Walden University in Minneapolis.
As far as leaving Basalt High School, Baiardo says the timing is right. “I’ve worked side-by-side with [Basalt High School Principal] Peter Mueller and we’ve done some really good things. I just felt like it was time for me to work as a leader in my own school.”
Baiardo sees herself as an integral player in leading, along with many others, RFHS’s future, saying, “I just really wanted the ability to start making my own vision and working with my own team.”