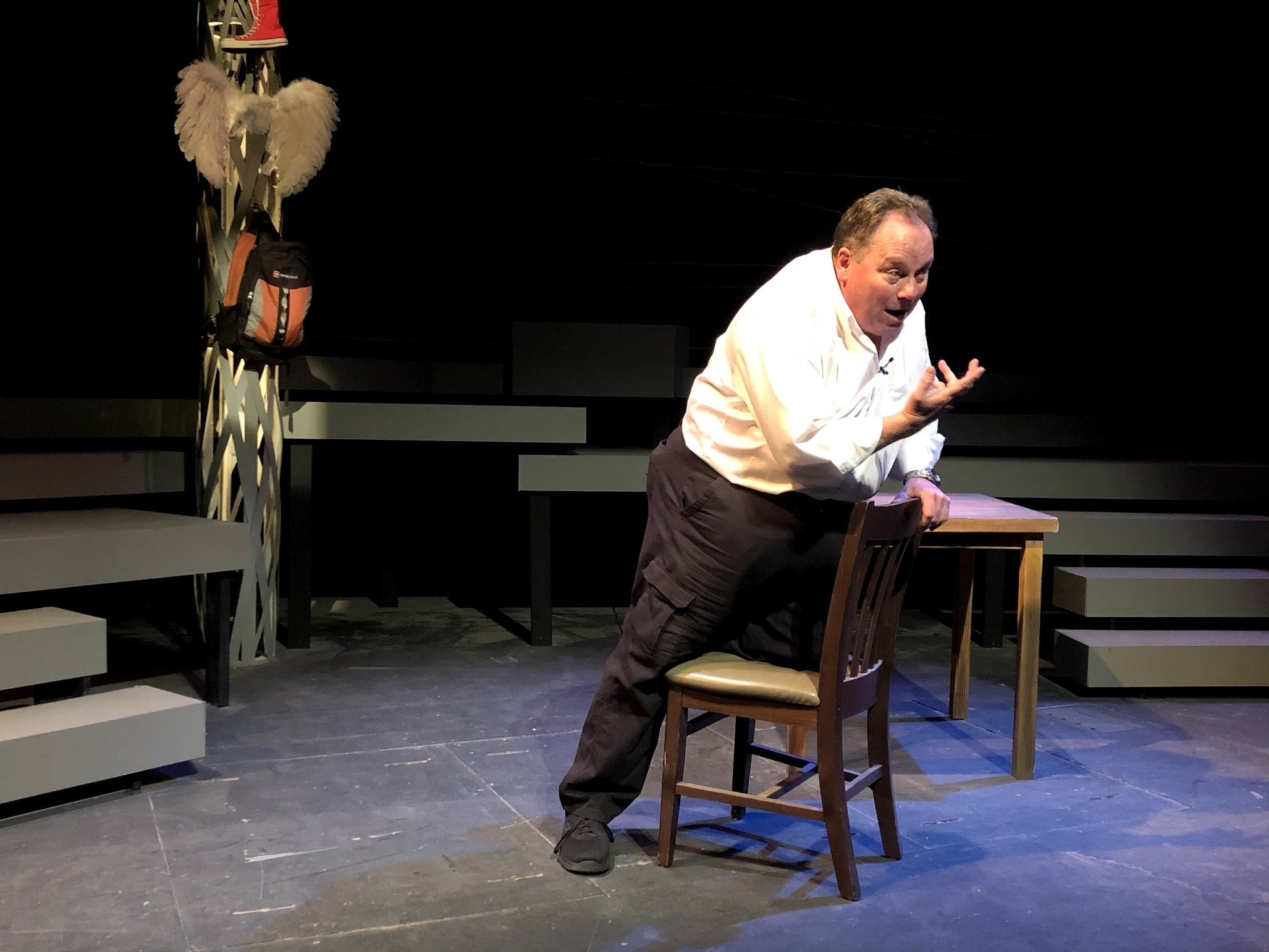 The story begins with the disappearance of a 14-year-old gay male, Leonard Pelkey. As Detective Chuck DeSantis investigates the missing person case, we come to know Leonard’s brilliant spirit in Thunder River Theatre Company’s (TRTC) production of “The Absolute Brightness of Leonard Pelkey.”
In 1998, playwright James Lecesne co-founded The Trevor Project, a national nonprofit organization, which provides crisis intervention and suicide prevention services to LGBTQ (lesbian, gay, bisexual, transgender, queer, and questioning) youth.
During COVID-19, TRTC Executive Artistic Director Corey Simpson said, selecting and casting plays has been a challenge. “A while back, I started looking at one and two-person plays and really found some fantastic pieces that still had messages that really resonate for this time right now.”
Simpson said, this one “checked a lot of boxes.” And being a solo show, it was easy to rehearse safely, with the actor in the theater and the director remotely directing through her laptop.”
Owen O’Farrell, a seasoned TRTC actor, plays nine characters in the solo show. The main character, Chuck DeSantis, is a gritty detective in a “godforsaken precinct down the Jersey shore.” It is through his investigation that we meet the eight other characters who knew Leonard.
DeSantis delivers the story surrounding the investigation to the audience some ten years after it happened. DeSantis has been changed by working on this case, in his way, being touched by Leonard’s life. At Simpson’s suggestion, O’Farrell found inspiration for DeSantis’ storytelling by acting as if he was telling the story to his own son, who is now 21 years old and who O’Farrell raised as a single dad. As O’Farrell recalled, “That was a trigger for me. That was a really big thing that made it important that I have to tell this story about this incredible gay kid who people bullied and how he changed all these people’s lives.”
According to Simpson, “What you discover, through the course of the play, is that most of these people are not people who would typically spend time with a character like Leonard, and we find out that they were all dramatically impacted in a really positive way by knowing this young man.”
Although Leonard never appears in the play, we get a distinct sense of his wise-beyond-his-years outlook on life — to “stay true to you.”
Director Sue Lavin said of the play selection process, “his spirit was so resilient and positive and original that I just loved the play.”
O’Farrell pulls off what is no easy feat, even for a seasoned actor — learning 27 pages of dialogue.
“It’s a large, large undertaking, learning nine characters, and that’s not just nine, there’s also other characters within the speeches of the other characters that also have to be portrayed,” O’Farrell said.
Yet O’Farrell achieves seamless transitions between characters of varying genders, ages, and personalities. This is accomplished in part by giving each character distinctive mannerisms.
Lavin, with 50 years of directing experience, said she needed to “mine the script for all its emotional power and deliver it in a true and honest way.” She credits “the fortunate choice of Owen O’Farrell as our actor,” because “he was capable of many of those moments of profundity that the play had.”
The set is minimalist, which allows us to focus on O’Farrell’s performance. Production designer Sean Jeffries had the idea of a tall post of interwoven wooden strips — symbolizing Leonard’s connections to others — where critical pieces of evidence are displayed. Lavin referred to them as “spiritual props” as “they represent the boy in a real, spiritual way.”
Yes, you will laugh out loud. The trail of emotional content is dotted with many little breadcrumbs of humor to provide moments of levity. Lavin calls the humor “fabulous” and explained, “That’s how it’s crafted, to give us these breaks because it’s a relentless script.”
And you will think. You will look at your own biases, your wishes for someone you care about to change their behavior or dress so they stay “safe;” so they aren’t bullied, threatened, or worse.
In DeSantis’ interview with Marion Tochterman, a character who is a client at the hair salon where Leonard works, recalls a conversation with Leonard where she asked him, “But do you have to be so much yourself?” To which Leonard answered, “If you stop being yourself, then the terrorists win.”
As Simpson said, the message is about acceptance and to “live your truth and be proud of that.” By the play’s end, we understand that Leonard would want that for all of us.
The production can be streamed on-demand the weekend of April 17 and 18 through Showtix4U by purchasing tickets at thunderrivertheatre.com. This production has been sponsored by a grant from AspenOUT.