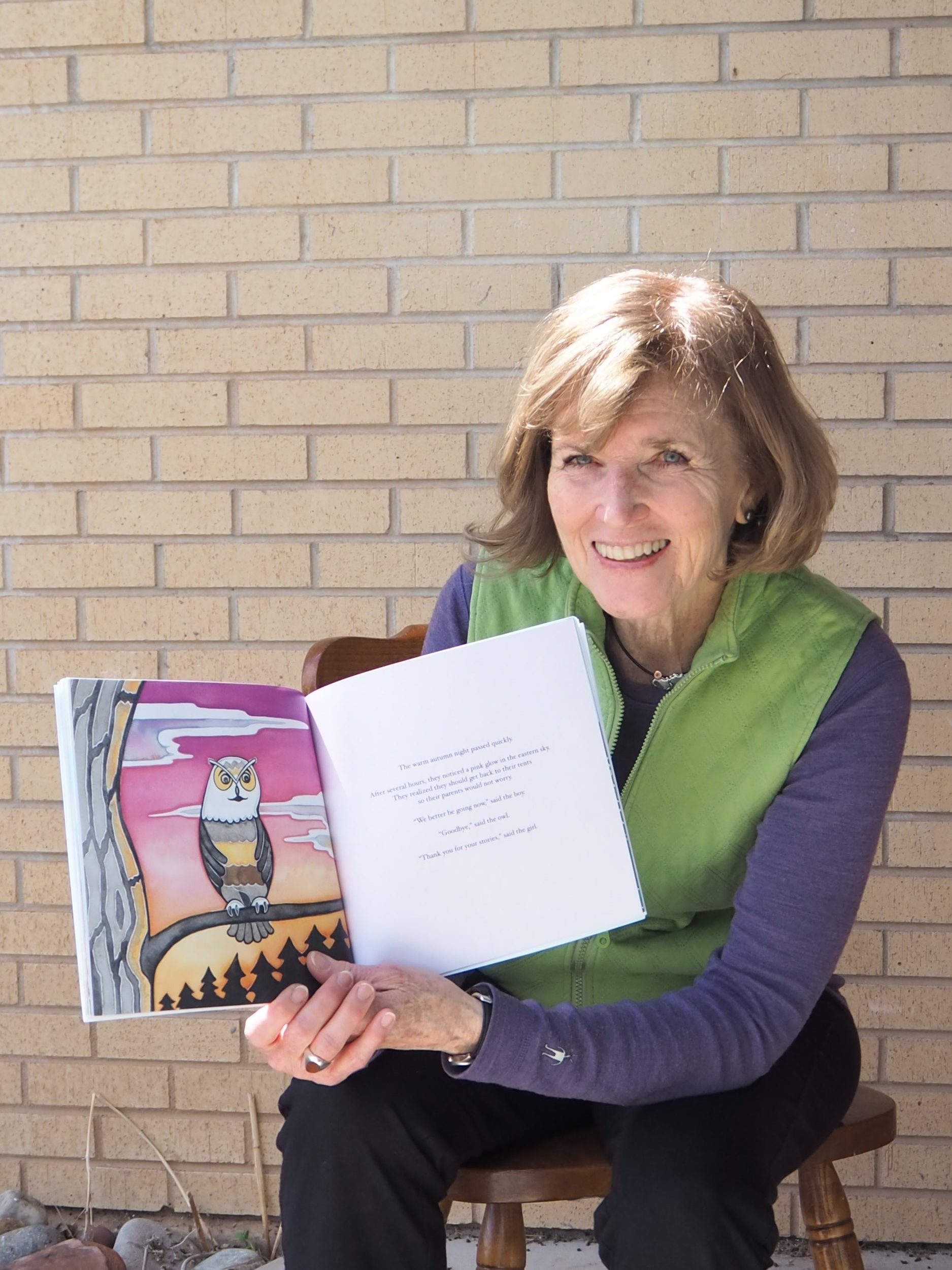 Author Lisa Dancing-Light shows off one of her favorite illustrations by Maggie Fricke for "A Song and Story of Magic Mountain." Photo by Raleigh Burleigh.

“Once upon a time in one of the most beautiful parts of the world, there was a very special mountain.” Thus begins “A Song and Story of Magic Mountain,” a culmination of decades of personal work and artistic exploration by local musician Lisa Dancing-Light. Beyond the children’s book itself, published on April 22, Earth Day 2021, “Magic Mountain” consists of a teaching curriculum, a musical, and someday, Dancing-Light hopes, an animated television show.

The principle song of the work, referenced in the title, was first written in 1981 and incorporated into a Children’s Rocky Mountain School preschool class in 1991. Dancing-Light was invited to help lead an environmental program with a musical basis and, with help from the Carbondale Council on Arts and Humanities (now Carbondale Arts), produced a musical. Artist Mary Noone helped to construct a giant, talking mountain out of canvas for the stage and “Magic” was born.

That first production included then-toddlers Nina Clark, Ki Chambliss, Molly Fales, Vallee Noone, Celeste Powers, Tanner Rollyson, Anna Schwinger, Tarn Udall, and others. When Dancing-Light shared the story with her granddaughter’s teacher at a Montessori preschool in Salt Lake, she was told that their kids loved it too, the song stuck, and “I could write a whole semester curriculum based on this story.”

Thirty years later, that seed is bearing fruit. With the pandemic as a creative impetus, Dancing-Light thought it imperative for herself and others to share comfort and peace during distressing times. “Nothing is going to take that mountain down,” said Dancing-Light. “Something about [Mt.] Sopris gives me hope.”

“Magic,” the talking mountain of Dancing Light’s story, is inspired by her connection with Mt. Sopris. He tells important stories to people with “a special way of listening.” When people forget to listen, Magic falls into a deep slumber during which the pristine beauty that surrounds him is steadily destroyed.

Dancing-Light lived for 38 years up Prince Creek Road with Mt. Sopris looming close. She describes hiking the mountain as “a metaphor for life: beautiful, a struggle, painful, exhausting … but the journey was worth every step.” She recalls feeling insignificant on the summit, a humbling experience. “I’ve never taken it for granted.”

Her journey to Colorado began with exploring Grand Lake and the surrounding wilderness as a child. She remembers riding horseback and experiencing the euphoric scent of wet balsam and the glistening sight of mica schist. “Whatever that activated in me brought an awareness that I craved until I was old enough to get back here.”

She now makes her home in Carbondale, grateful for the conveniences of being in town but always holding dear the experience and inspiration of living so close to Mt. Sopris. A constant during the pandemic has been her communion with nature. In the vein of Dr. Seuss’ “The Lorax,” Dancing-Light felt urgency to share “consciousness on how we’re using resources” and “personifying ‘magic’ felt like a good segway.”

Crucial to the success of the book was the discovery of illustrator Maggie Fricke who lives in New Castle (maggiefrickeart.com). Although Dancing-Light and Fricke have yet to meet in person, the author says that her illustrator feels like a sister after so much back-and-forth to communicate every detail down to articles of clothing worn by characters, the style of tents, and the flickering presence of an American Dipper to guide the narrative. “Maggie really felt into who Magic was, the personification, the kids — she nailed it.”

The two were acquainted through Light of the Moon, Inc., a publishing company based in Carbondale. Dancing-Light will continue to work with Light of the Moon on a spiral bound workbook for her curriculum and a Spanish version of the story.

Reading through “Magic Mountain,” one may feel tantalized to know the mountain’s great stories. The book itself tells the story of the mountain, but what the mountain tells the people is left a mystery. Dancing-Light says that’s because Magic’s stories are collaborative. Part of the curriculum, written with help from Grace M. Zanni, involves writing stories, scripts, and songs. The book’s “deeper messages are left unspoken,” and require “a special kind of listening.”

This approach was derived from the Suzuki method of teaching piano which Dancing-Light practices with her music students. “Listen to what’s between the notes. What waits to be heard?” Her hope is to cultivate storytellers and curiosity linked to nature. Her musical background is also incorporated into the curriculum’s musical, which borrows songs from her albums Point of Balance (1989) and Sophia Songs (2004).

A list of references at the end of the book includes “Last Child in the Woods,” written by Richard Louv, and others espousing the “forest method” of educating children. “I didn’t realize I was part of this movement, but I’ve been learning this way for 30 years.”

A live reading event through Garfield County Libraries is scheduled for 3 p.m. on April 22. To learn more, visit gcpld.org/dancing-light

To order the book and download the curriculum, visit lisadancinglight.com/