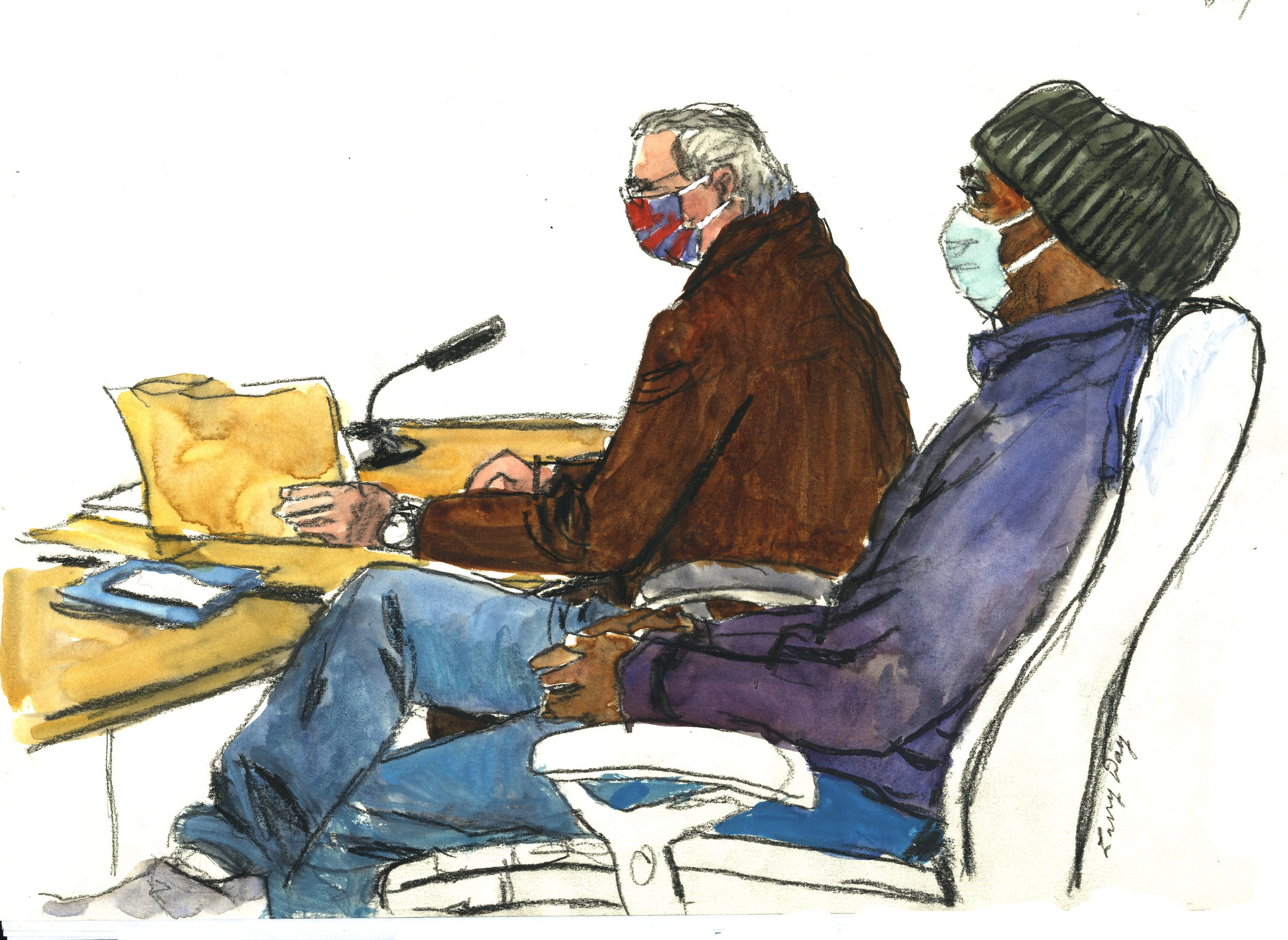 Michael Francisco's hearing at Carbondale Municipal Court was continued again on April 26. According to Michael Edminister, Francisco's lawyer, the possibility for restorative justice is being explored. Sketch by Larry Day.

The saga of the Michael Francisco case goes on. A hearing in Carbondale Municipal Court on Monday, April 26, was over almost as soon as it began, resulting in another continuance.

Citizens packed the courtroom — as many as the spaced seating inside Town Hall could fit —  and outside several more wielded signs expressing their contempt of the case. After witnessing the process of a few unrelated cases ahead on the court’s docket, peoples’ ears perked when Francisco’s was called to order.

“Right now, the town and Mr. Edminister [Francisco’s defense attorney] are talking about a disposition,” Prosecutor Angela Roff led, “and the people would request … to set the matter over for continued discussions on a resolution.” Judge John Collins followed up with defense attorney Michael Edminister who replied, “I don’t have any opposition to her motion.” The matter was set for May 24 at 4:30 p.m. and the hearing was adjourned.

Former town trustee Katrina Byars made her way into the courtroom with a protest sign in hand. “This is a miscarriage of justice,” she exclaimed, “I cannot believe this was continued … Shame!” Byars concluded stating, “These charges need to be dropped. Drop these charges, drop the charges!” Applause of approval echoed in the courtroom as she exited.

During the five-minute hearing, Judge Collins asked Roff if the subpoenaed records from City Market had been received. Roff responded that about 90% of the materials had been and she didn’t think the remaining undisclosed materials would affect the trajectory of the case. Roff later told The Sopris Sun that they “received most of the subpoenaed materials on March 15.”

Roff does not come across many cases involving City Market and when she does, most relate to alleged theft. Those cases are resolved fairly quickly, but “cases that don’t involve theft at City Market usually take longer to resolve,” she said.

The Sopris Sun reached out to City Market again for comment but has not received a response as of press time.

When asked at what point a case can be dismissed due to insufficient or incredulous evidence, Roff responded, “Prosecutors have a duty to only go forward on cases with sufficient evidence,” and summed up, “In this case, I can state that I haven’t dismissed the charges.”

Edminister stated that his client wants the case dismissed, and otherwise they will take it to trial. Francisco would also like an apology, which Edminister believes he is entitled to. The idea of restorative justice has also passed between the parties and, according to Edminister, neither side is writing off the idea for this case.

Restorative justice is an alternative route to resolution in a criminal case. The idea is to involve all of the stakeholders to reach a collective outcome. Facilitators organize the meetings and make sure that everyone involved feels safe — often this means participants agree not to speak about the specifics of the process outside of it, thus instilling a level of trust between them. The outcome, however, is shared publicly. This is especially important when the community at large has been affected.

Restorative justice initiatives have been around for more than 35 years. YouthZone in Glenwood Springs practices elements of restorative justice to effectively keep juvenile offenders out of the punitive system. Though Roff would not acknowledge the consideration of the alternative in this case she added that, “restorative justice is a process which can be relied upon to repair the harm in criminal justice.”

Some folks are frustrated and have accused the town of delaying and not adequately addressing the matter of alleged police misconduct at the time of Francisco’s arrest. Roff told The Sopris Sun, “No one at the town can speak on the specific discussions in this case” because it is still being prosecuted. Roff said, “It interferes with the administration of justice to speak on this case other than what is public information.”

Francisco told officers on the night of his arrest that he had done nothing wrong. He continues to repeat that message. “It’s unfortunate that I have to go through a situation where there was no problem and be stringed along,” he said, “but I think there’s a greater purpose for it.”