Glassblowing at CRMS refined by expertise 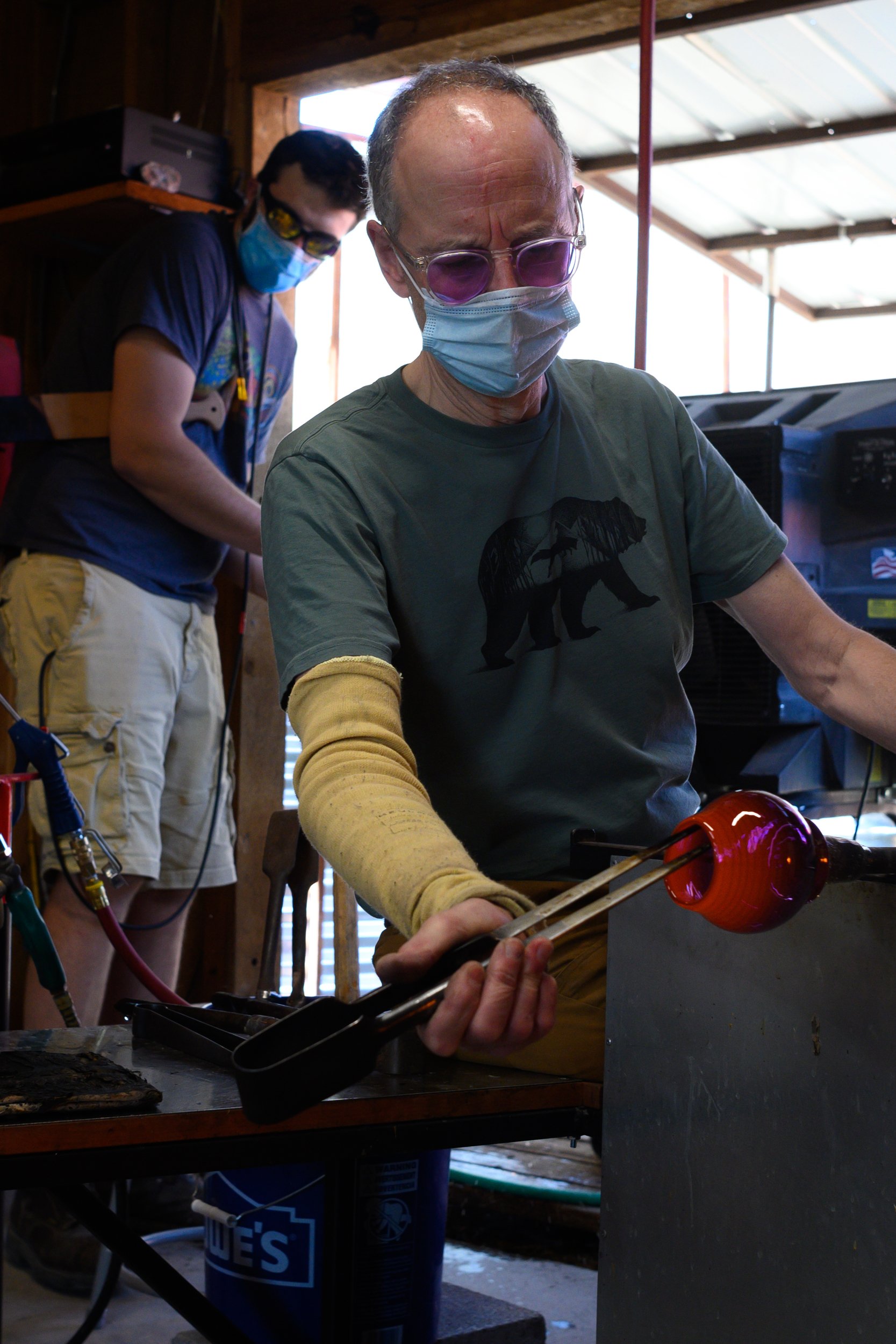 José Chardiet glances through purple tinted glasses, checking on the molten-orange blob of viscous glass dangling off a metal rod. The blob twirls in sync as his lean arms push and pull. Studio assistant Martin Gerdin gathers more glass on another metal rod, moving skillfully around the small studio despite nearly maxing out its height capacity.

“I was working all the time in my studio in Missouri Heights which was really isolated. I saw it as ‘okay, there’s this community down there that I can be a part of and I really would enjoy being back teaching.’” This thought led Chardiet, an internationally-acclaimed glass blower, to accept a job teaching at the Colorado Rocky Mountain School (CRMS) and, as Gerdin put it, to “save the program from disappearing at the school.”

Before teaching at CRMS, Chardiet lived many other lives. His family left Cuba when Chardiet was four years old after realizing that things weren’t going well with Fidel Castro’s leadership. His father had attended Dartmouth University in New Hampshire and felt comfortable in New England so they settled in Connecticut.

For his undergraduate degree, Chardiet attended Southern Connecticut State University on a scholarship to swim. During his freshman three-dimensional design course, the instructor, who had started the glass blowing program, went to check on students working in the glass studio. Chardiet followed. “I was just so blown away by it and the next semester I took my first glass class. I quit swimming and just went full on into glass. I never looked back.”

Chardiet went on to do his Master of Fine Arts (MFA) at Kent State in Ohio. While visiting Detroit, Michigan, for a professor’s art opening, he attended the exhibit “Primitivism in 20th Century Art”  where he found an early, yet lasting, source of inspiration. “They would have African and Oceanic art, which I had never been exposed to on that level, and they’d have it next to work like Picasso’s, right up to contemporary art. You could see the influence of it. I was influenced by it!” In his artist statement, Chardiet reflected, “I was struck by the tribal artists’ ability to take unpretentious, common-place objects and elevate them through carving, pattern and abstraction to a higher level, visually and conceptually.”

After graduating from his MFA program, Chardiet returned to Connecticut to set up his own studio where he gained recognition in the glass community. In his early 30s, he was offered a teaching position at University of Illinois Urbana-Champaign. “That really changed my life for a while. It was a huge university and big glass blowing program like nothing I’d ever seen.” After teaching for 10 years, he left to set up a new studio in Providence, Rhode Island. “I don’t know what I was thinking! I walked away from a tenured full-professor position, basically job security for life.” He didn’t regret it though because his work was selling profusely while gaining further recognition in the art world.

Chardiet’s work was regularly exhibited in solo and group exhibitions across the U.S. and abroad. Ideas that inspired him from the “Primitivism” exhibit still influenced his work. “In African art and other forms of ancient art, the vessel is always a kind of metaphor for the human body. That’s really what I’m interested in … I think about the soul a lot, the interior part of people.”

While glass blowing began as a functional craft, Chardiet’s work had departed from tradition as he crafted “still lives” and non-functional vessels, like teapots made of solid glass. “To many people, it’s got to function. It’s got to be hollow. But, it really doesn’t have to be. I like playing around with those traditions … just kind of flipping it upside down… and making it completely nonfunctional— but hopefully making it really visually interesting too,” Chardiet said. He often finishes these by sandblasting or electroplating metal to the outside to create an opaque textured surface, while leaving windows that allow you to see inside to question what a solid container can hold.

After 10 productive years in Providence, Chardiet and his wife relocated to the Roaring Fork Valley. They had met here at one of Chardiet’s gallery shows where she was working. After she moved to Providence with him, it was his turn to move back with her. This is when Chardiet’s studio once again relocated, but this time to Missouri Heights and then to CRMS. While Chardiet is less involved in the gallery world than he used to be, he still makes his own work on top of teaching, which presents a new set of challenges. “I’ve never taught on the high school level before, and that’s new and it’s different … We’re [Chardiet and Gerdin] balancing making our own work, you know, and working with the students. So, if I’d been working in the morning on my own stuff in front of the furnaces, it gets pretty hot and I’m pretty tired by the time I’m teaching in the afternoon, but I love the community here.”

Chardiet’s work retains slight traces of the numerous landscapes he’s inhabited, mainly in his use of color. He believes Carbondale will also impact the glass he creates. “I could see the red stone here and the mountains literally make their way into my work.”