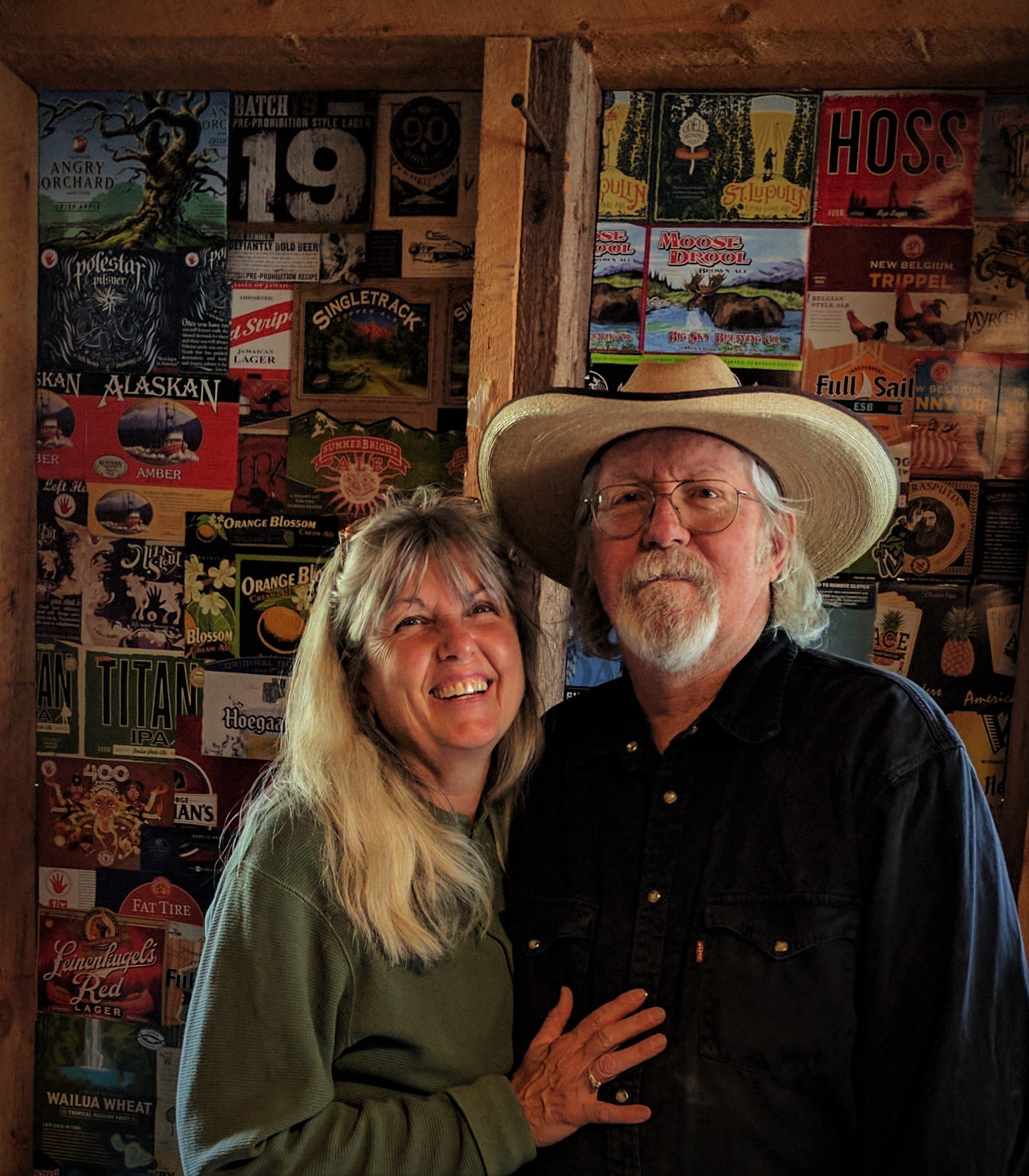 I am certain that I have driven past Four Mile Creek Bed & Breakfast more than 100 times, often at the maximum allowable speed limit. However, that changed recently when I stopped in to visit with owners Jim and Sharill Hawkins. My visit resulted in much more than learning about their business. Rather, I met two interesting, unique people who share a love of creating a space that reflects their interests, skills and artistic talents.

The main house at Four Mile Creek Bed & Breakfast was built by the Earnest family in 1926. The moment one steps through the front door, it’s apparent that this is not “just another bed and breakfast.” The living room and dining room are filled, floor-to-ceiling, with a tastefully displayed collection of antiques and one-of-a-kind items. Make no mistake, this is not random clutter. Each item draws one’s attention, and each has its own accompanying story. When asked where the displayed pieces were found, Jim replied that most of them had come from auctions, thrift shops and garage sales.

An 1892 Hazelton Brothers upright piano in beautiful condition occupies most of one wall in the dining room. A very old typesetter’s “type bank” sits nearby. The type bank is essentially a tall wooden chest with very shallow drawers from top to bottom. Many years ago, typesetters would have stored individual moveable type letters in each shallow drawer. As Jim reached out to open the top drawer, I expected to see rows of the individual letters that were once required for printing. Instead, I saw a collection of unfired antique bullets that dated back to the Civil War. The drawers below the bullets held an enormous collection of buttons, some of them nineteenth-century vintage. An antique telephone sat nearby, and I half-expected it to ring at any moment.

Two fireman’s helmets are among the many items. Both helmets were Jim’s, and he wore them during the 24 years that he spent working for the Denver Fire Department. Jim says that his current title is “Chief Cook and Bottle Washer.”

Sharill has found her own uses for vintage objects. She expresses her considerable artistic talent by designing and creating folk-art jewelry. She gives new life to colorful old tin items, transforming them into beautiful, wearable earrings, brooches and necklaces. Sharill currently has nine galleries that consign her work or buy her jewelry wholesale.

It was a mutual friend in Denver that first introduced Jim and Sharill to each other in 1983 when they were both attending a meeting to create a new fine art cooperative gallery in Denver. Their relationship took root, flowered, and Jim and Sharill were married in 1987. Eventually, they moved to Colorado’s Western Slope.

Jim (born in Wyoming) and Sharill (born in Iowa) started their bed and breakfast business in 1997 and are now in their 25th year of operation, offering three cabin units that can accommodate a total of 10 guests. They have many repeat guests, and have hosted people from 70 different countries including Russia. Their business is open year-round with the exception of Christmas Eve and Christmas Day.

Jim is a musician, so a unique feature of the business is that he and musician friends often perform music on a stage in the barn, adjacent to the main house. The list of performers has included Tom Paxton, Jackson Emmer, Let Them Roar, Stray Grass and Joe Jenks. Jim is a songwriter, having recorded four compact disks with his musical partner Fred Hamilton. His favorite guitar is a Larrivee D-03 from the early 2000s.

In addition to the stage, there is a magnificent hat collection in the barn, including everything from classic western styles to sombreros. Jim admits to having a collection of between 50 and 75 hats.

The barn is also home to a neon sign from the old Rex Hotel in Glenwood Springs. When asked how he had come by it, Jim explained that the sign was previously in The Glenwood Springs Historical Society’s collection, but they had nowhere to display it due to its size. Jim has restored three of its four sides, and repaired the original neon light feature. The fourth side was left in its weathered state.

Jim’s most remarkable story has nothing to do with music, collections of Civil War bullets, or hats. In July, 2016, Jim found a two-year-old bear on his property that had gotten its head stuck in a clear plastic jug. The bear wasn’t injured, but Jim knew that the bear would die if it could not eat or drink, so he acted, hoping to save the bear’s life. Jim got a rope around the animal’s neck, and despite injuries inflicted by the frightened bear, he managed to tie his end of the rope to a tree trunk. He then contacted the Department of Wildlife and asked them to help the bear. Jim went to the hospital and explained what had occurred to the receptionist, but she did not believe him. In the end, the bear survived, and Jim got his stitches and quite a bit of notoriety as a “bear-roper.”

Jim’s current job as “Chief Cook and Bottle Washer” is much safer work than bear wrestling.