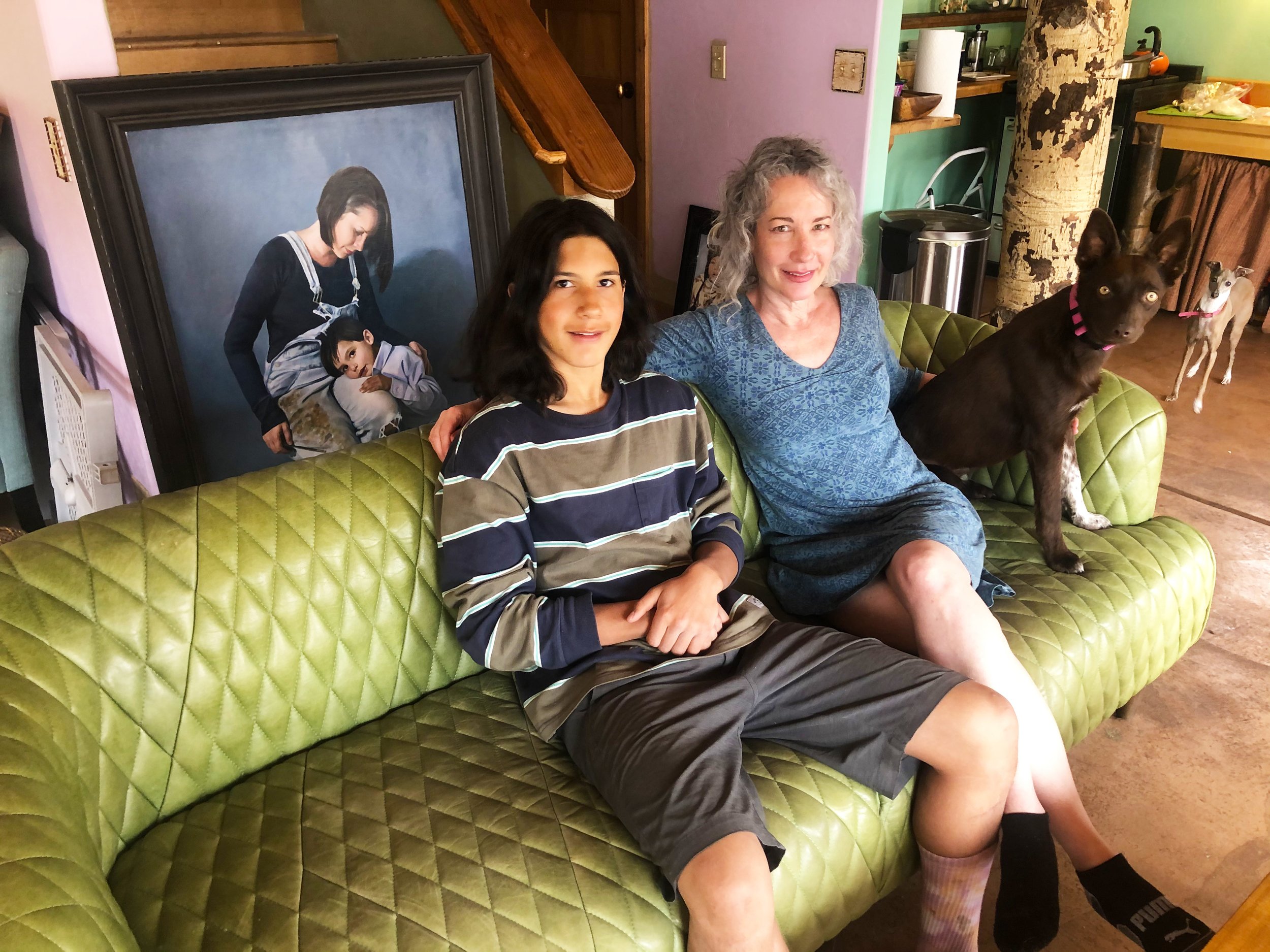 Tracey Harris (right), and her son Max share their house with two dogs: Sprite (left) and Natalie (right). Max played slotback for the Roaring Fork Rams football team this season. The dogs like to play with each other. Photo by Lynn Burton photo.

Here is something most non-artists don’t know and many artists can only dream about: when an artist starts doing solo shows, galleries take notice and sometimes contact them to join a roster, rather than the artist contacting the gallery.

That’s what happened to Marble artist Tracey Harris. She is now carried by five galleries, located from the East Coast to the West Coast, but only contacted one. The rest came to her.

“It started with one gallery in Tulsa,” the Oklahoma native told The Sopris Sun. “I took my portfolio in to show them. That’s the only one I contacted.”

Harris recently reported to her Facebook pals she is in “beast mode,” completing and preparing new work to ship to galleries in Nantucket and Dallas.

Harris’s website (traceyharrisartist.com) describes her work as “Contemporary realist painter specializing in figurative and still life oil paintings.” She supports herself, 16-year-old son Max and two dogs through the sale of portraits and paintings of book spines with titles she conjures up herself, including: “Staying Warm Near the Dumpster Fire,” “Self Help for the People Around You,” “Never Settle for Who You Are,” “Adapting Like a Badass,” and “Memoirs of a Less Shitty Time.” She chuckled when she said one book title is “Good Mothers Nurture Dissent” then indicated now that Max is 16 years old, she’s not so sure.

Four of Harris’s portraits hang on the walls of the Oklahoma State Capitol building, each depicting a prominent Oklahoman. Her most recent one is of the late Ralph Ellison, a Black writer who is perhaps best known for his 1952 book “Invisible Man.” Ellison grew up in Oklahoma City, where he was well-known in the “Deep Deuce” part of town, which is often described as similar to New York City’s Harlem of the 1930s.

Undertaking the Ellison portrait was a bit of a challenge. For one thing, there are no known color photographs of Ellison from which to work. “I had to do a lot of research,” she explained. Part of the process included finding a man the same size as Ellison, painting him, then adding Ellison’s head. In the painting, Harris has Ellison standing dressed in a black suit and striped tie, holding a copy of “Invisible Man.” He is standing in front of the Deep Deuce’s Aldridge Theatre marquee that features posters of musicians who passed through town, including Duke Ellington, Jimmy Rushing and the Blue Devils. “So, the painting is based on an image that doesn’t exist … I wanted to bring him back to Oklahoma. It was kind of complicated but easy to figure out.”

Harris said she loves painting portraits. “It’s the only time I get to spend time around clients.” Harris said she’ll first meet with a client to discuss what kind of portrait they want. Next, she’ll shoot photographs to work off of. After drawing out the portrait, she shows it to the client. “I’ll show it to them more than once.”

Harris started her book series at least 12 years ago. They are lit from the side with colorful sticky notes protruding from the pages, marking salient passages in the fictional tomes. Some books are standing while others are stacked. In some paintings, there are several books and in others just one or two. Most of the books look as if they have been read and re-read; some are falling apart. The book paintings were an immediate hit. “I knew the series would have longevity,” she said.

Harris is currently working on a selection of book paintings for the Quidley & Company gallery in Nantucket (which also carries her paintings at its galleries in Florida and Connecticut). The Craighead Gallery in Dallas is also set to receive some of Harris’ book paintings.

Harris and Max previously lived in the Washington Park area of Denver. They both like to hike and to camp. So, one day – more than four years ago – she asked Max if he wanted to move to the mountains. He said yes, so they moved to Marble and bought a house.

Harris didn’t know anything about Marble or the people who live there. “I had no idea what the community would be like. It was a total life change but it’s worked out for the best.”

Harris quickly learned the move was a wise one after Max’s experiences at the Marble charter school. Early on, his class went on an overnight field trip and Harris was home alone sitting on her porch. “I literally thought I’d died and gone to heaven. It’s so beautiful here.”

One of her favorite things to do is to paddle board on nearby Beaver Lake. “I could do that forever. I don’t think I’ll ever get tired of this place.”