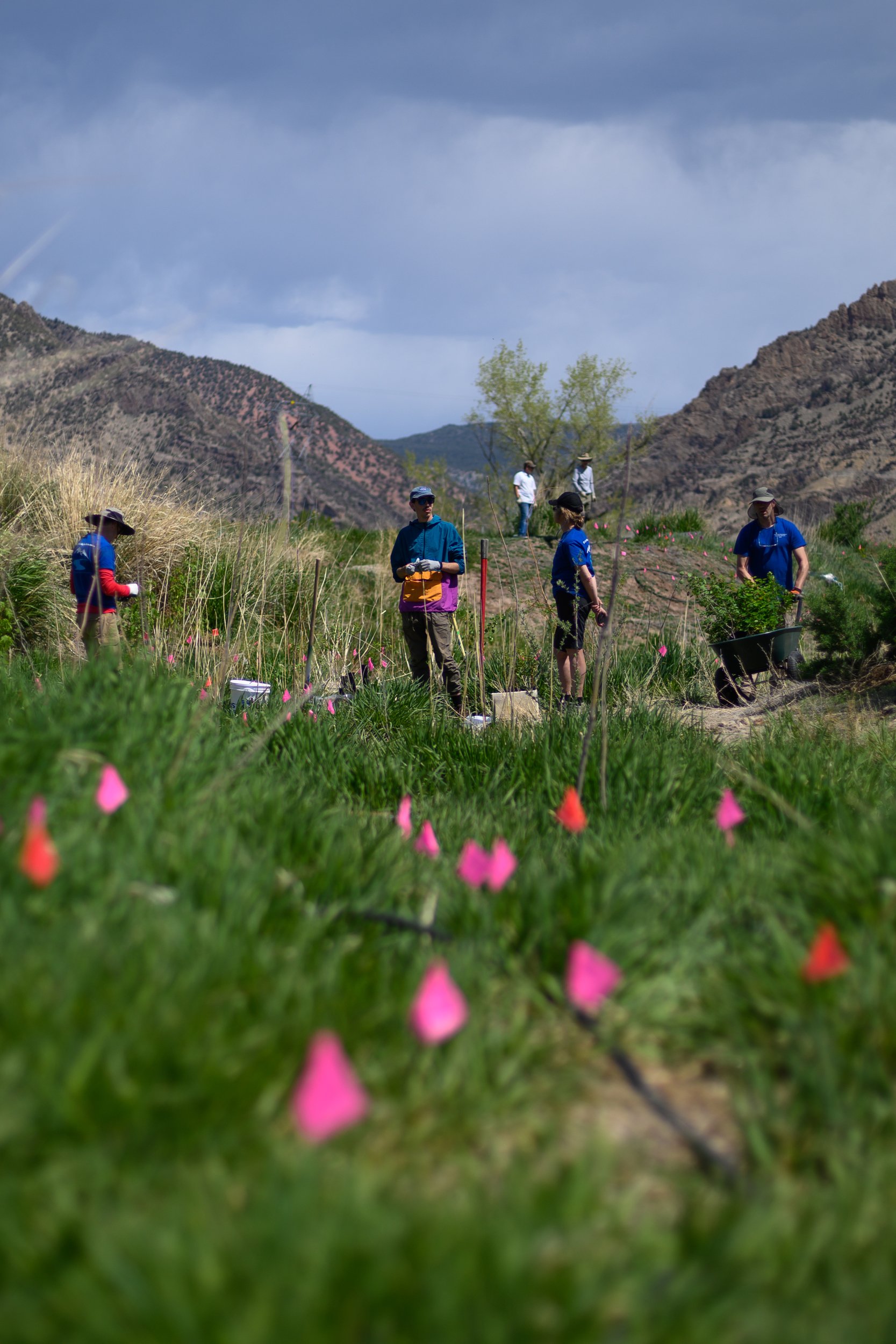 Volunteers work to plant a native seedling next to every flag. Photo by Will Sardinsky.

As mountain meadowlarks called out, Lisa Tasker buzzed about Rifle Creek’s banks among a sea of small pink flags emerging from the ground. She delivered cottonwood, willow, rose, serviceberry, sumac sage, and oak saplings to be planted at each flag to about 30 shovel-bearing volunteers organized by Middle Colorado Watershed Council and Wilderness Workshop. These volunteers were instructed to dig holes of the right depth and gently surround each plant with the correct amount of soil so air pockets won’t rot the roots. These plants will help return the creek to a native riparian ecosystem – one with nutrient-rich waters conducive to macro invertebrates, fish, birds and maybe, someday, beavers.

“Agriculture is the biggest impact to our native systems on the planet, bar none,” said Tasker, an ecologist with the Colorado Natural Heritage Center, “because we literally go in and erase them to install simplified systems with little to no diversity.” One factor is overgrazing of livestock on a particular area, another is planting a monocrop which strips the soil of one nutrient without other plants that help replenish it. Here, along Rifle Creek, the banks have also been sharply eroded due to the upstream dam. Sitting still behind the dam, the sediment drops out of solution. Then, when the water passes through the dam it grabs at the banks replacing previously lost sediment to return to equilibrium. Despite all this, Tasker emphasized, “You can do agriculture and leave natural habitat alone.”

During the first two years of the project, she worked with landowner and steward John Powers to fence off the riparian zones from the agricultural fields, removing invasive plants like tamarisk and Russian olive, and conducting a “bioblitz,” a comprehensive survey of all existing species. Powers, noting the importance of this baseline data, said, “It’s necessary to find out where you’re starting before you make changes. What are you changing? You won’t know.”

Now, they are in the third and final year of guiding a plethora of volunteers in planting  what will amount to nearly 10,000 new individuals of 28 native species along the .8 miles of the creek that runs through Power’s property. Most of the seedlings were sourced from regions of Colorado with lower elevations and warmer climates than Rifle. Some were even from the desert region surrounding Moab, Utah. Tasker explained, “With warming climate in Rifle, we’re hoping that they will do better maybe than the ones that are already existing here… we’ll see. It’s all a big experiment.”

Whether as an educational resource, an example for other private landowners, or a display of different groups of people working together, “a rarity nowadays,” Powers noted, this relatively small project on one piece of private property serves as an example that reaches outside of Power’s acreage, and could serve past his lifetime. “It’s always struck me when someone says, ‘your property.’ Well, I’m temporary, right? The property is going to be here after I’m gone or any of us are. You know, I’m transient, I’m mortal. So it’s challenging when people say, ‘Oh, look what you’re doing on your property.’ No, I’m just a steward, as a temporary, and this land is going to certainly exist long after I’m gone. So maybe it’s an example for people yet to come, we’ll see.”