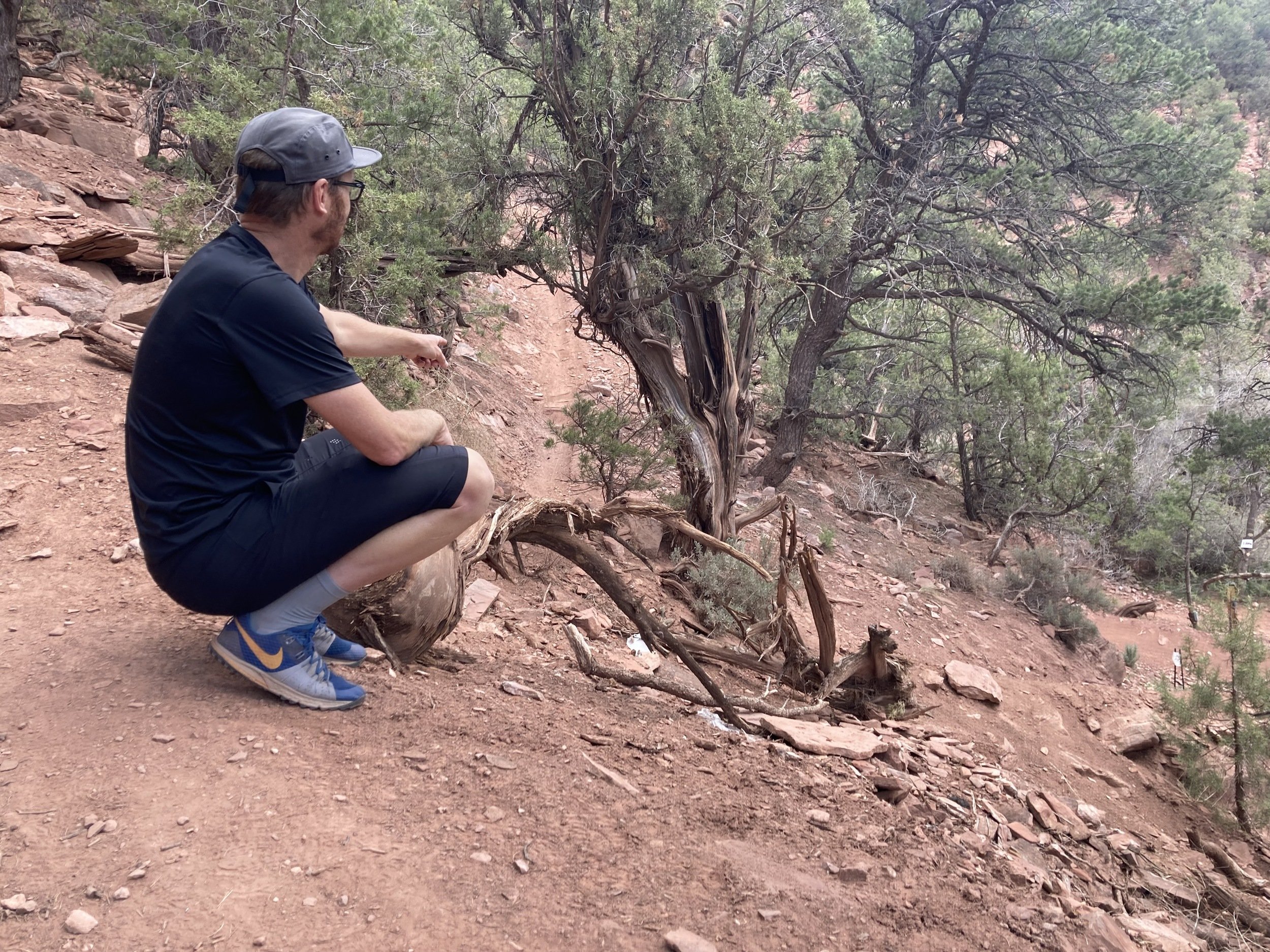 Chris Brandt surveys a steep switchback on the B Line trail. Photo by Kathleen Shannon.

The trails in Carbondale’s Red Hill Recreation Area are loved. If that’s not clear from the jammed parking lot, there’s evidence along the trails themselves. Crumbling paths between switchbacks are evidence of shortcutting – by both humans and canines. Dog poop bags line the trail creating bubbles of stink for trail users to hold their breath through. Trail braiding toward the top of Mushroom Rock masks the original trail amongst countless others. And many trails on the front side have evolved from single-track style to fifteen-foot-wide passageways. Some folks use the term “loved to death.”

Chris Brandt is a landscape architect and competitive mountain biker who moved to Carbondale after he first biked this trail system. He still loves it. But after putting volunteer work into the trails for over a decade, he notices all the changes on the trail and he can identify all the damage.

On a recent hike, he picked up a small, flat chunk of hardened soil. “This dirt is fluffier,” he says, as it crumbles easily between his fingers, sprinkling loose, red dirt back down. “It does this and doesn’t bind together.”

Not all dirt is equal. Red Hill’s namesake is the soil Brandt is showing me: it’s sandy and fragile. Trails through the sagebrush on the opposite side of the system tend to be stickier. That means they’re more resilient, can handle wear better, and people tend to stay on the trail to avoid bushwhacking. Those ascending on sandy, steep rock are more likely to cut corners and, incidentally, cause damage.

Moving off-trail is harmful to the surrounding ecosystem and that behavior is one of Brandt’s biggest concerns. It disrupts a layer of pine duff that can range from a fine dusting to inches deep. Once that’s swept away, what’s left is the rock beneath: challenging for plants to grow in and tempting for people to hike through.

COVID-19 has created more impacts, too. Hikers and bikers have unintentionally widened trails to maintain social distance. Plus, those suffering from cabin fever tend to hike this area early in the season: it’s south-facing and dries out first. But, it gets muddy first, too. Peak trail traffic is in March and April: when the trails are most vulnerable.

“Every footstep you take, you pick up some dirt and put it somewhere else,” Brandt says. “That disrupts a lot of the structure we’ve put into the trailbed to control runoff. It seems harmless, but multiply that by a thousand. It adds up and makes a significant impact.”

The impact of one thousand visitors is only a small piece of the pie. Red Hill sees about 40,000 recreationalists per year. The Red Hill Council knows that maintenance is vital. It’s a group of concerned trail advocates and private landowners that formed in the 1990s – when the trail system consisted of bandit routes to the top. Since then, the council has typically spearheaded maintenance and facilitated construction of Red Hill trails.

That brings us to the new trails. When the town of Carbondale acquired the parking lot and trailhead parcels in 2017, through Aspen Valley Land Trust and community donations, they were rebuilt. User surveys showed a preference for individual-use trails. So, separate trails were built from the new trailhead: one for hikers and others dedicated to downhill and uphill mountain bikers.

Brandt says mountain bikes and trail engineering have both advanced since the 1990s. The goal for modern trail builders is to design sustainable routes from the start that require less maintenance over time.

That approach didn’t quite pan out on B Line, the bikers’ descent. When Single Track Trails Inc. put shovels to dirt, builders quickly found bedrock. The design that had looked good on paper, therefore, didn’t translate precisely to the landscape. The target average grade for the trail system is 15%. Some areas of B Line slope more than 35%.

Roaring Fork Mountain Bike Association Executive Director Mike Pritchard laughs when he says that the trail is “exceedingly challenging for riders.” A trail that steep won’t handle the volume of use, and soil is already starting to erode.

Pritchard says the trail doesn’t “exactly meet the aims” – a sentiment that all local trail advocates would agree with.

Carbondale Parks and Recreation Director Eric Brendlinger is meeting with those groups by early June to make a game plan to improve the trail. Work will likely include trail armoring, a technique that uses angled rocks to reinforce steep bends. He points out that it’s okay for the trail to be challenging. In fact, the Red Hill system is known amongst bikers to be a challenging ride. Brendlinger says building a green circle trail to a black diamond system would be misleading for riders.

Although work on B Line requires a professional team, Brandt says there’s plenty of need for volunteers to help maintain the rest of the system. “We’re fighting a little bit of a losing battle because of the high volume of use,” he says. “We’re struggling. We need more participation, more people to care and step up and help.”

At the very least, hike dirt, not mud. And go ahead and carry out that doggie bag.