C’dale commercial occupancy down but not dire 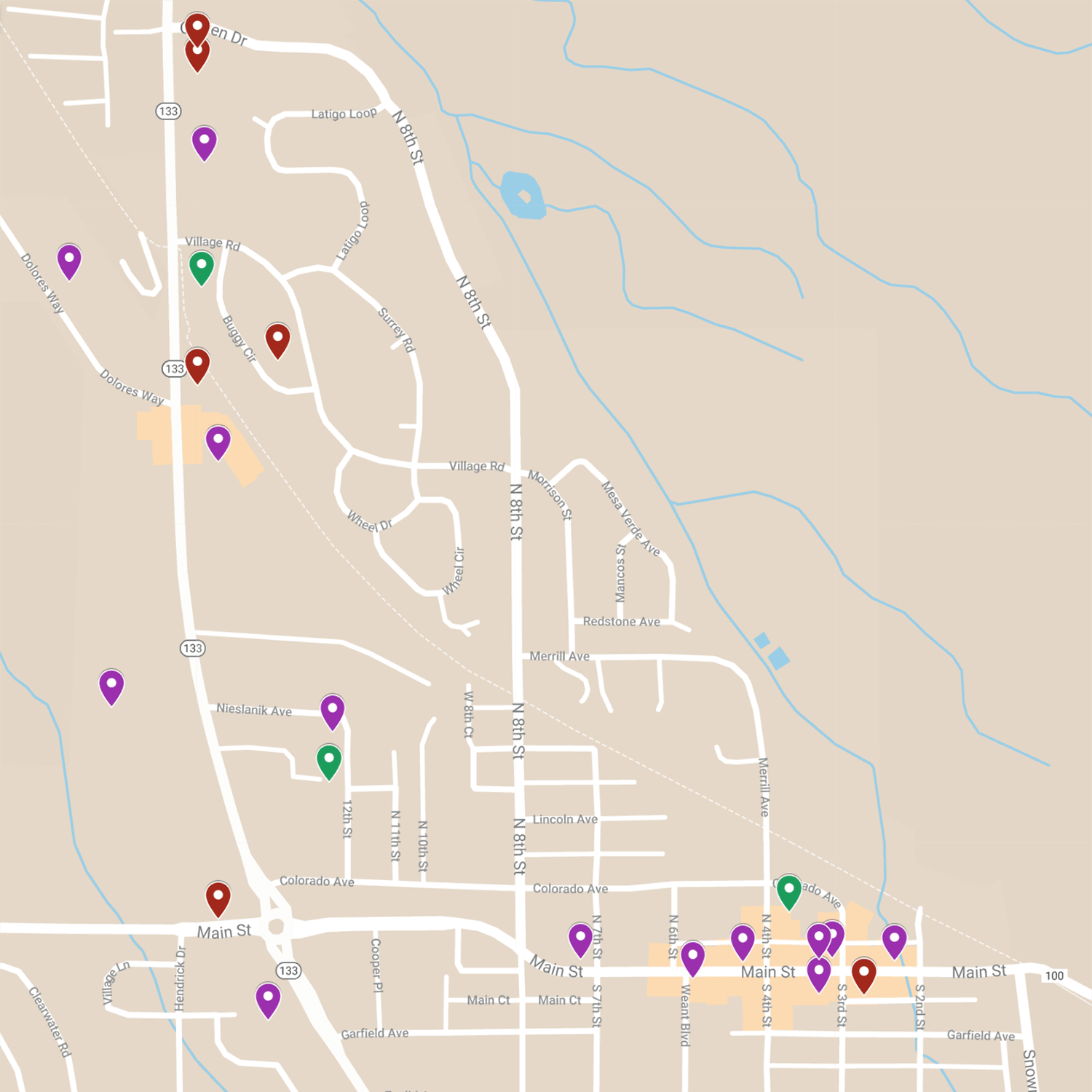 Sun staff found a fair number units newly vacant from last year (purple) and a few newly-filled ones (green) as well as several spaces that remained empty for at least two consecutive years. Graphic by Will Grandbois.

Last year’s freeze is thawing, and the local business scene seems to be emerging mostly intact.

Our annual commercial inventory found just 10 fewer operating storefronts and offices than last year. Yes, that’s a negative trend, but with the pending demolition of the Sopris Shopping Center reducing the overall number of units at the same time, we calculate the occupancy rate as down less than a percent year-over-year — from 90.55 to 88.81. That’s still higher than the 88.7 figure from 2017, when we first took inventory, and far less precipitous than the three-point drop between June 2019 and June 2020.

At that time, we expected the worst was yet to come. Our less-than-scientific tactic of walking through commercial buildings, checking door signs and peering in windows made it difficult to tell the difference between establishments shuttered temporarily and those defunct or soon to be.

Admittedly, there’s still some uncertainty. But, at this point, it seems fair to assume that any owner that has held onto space this long has some intent at reopening (we’re looking at you, Pour House).

“Although we saw a slight decline in our membership, we have retained 83 percent of our members since May 2020, and have had 36 new members join the chamber over the past 12 months,” she noted. “We’ve seen businesses shift their pre-COVID business model to better meet the needs during COVID, and now post-COVID (including to-go, grocery offerings, delivery, remote work opportunities).”

A recent outreach survey found that 99 percent of Chamber member businesses are open, with 58 percent reporting the same level of staffing, 23 percent a reduction and 19 percent an increase. The majority of businesses rated their 2021 business outlook and sustainability as a four (47 percent) or five (34 percent) out of five. The full survey findings will be posted to carbondale.com the week of June 14.

“Overall, I would say that the tone is optimistic,” Stewart said. “Our business community had to adjust to the ever-changing health and safety protocols, but is very resilient, and creative!”

The next year should see several new commercial spaces come online, with mixed-use developments under construction at the Carbondale Marketplace and at the northeast corner of Main Street and Highway 133. Permits have also been issued to remodel the old Construction Junction building into leasable tenant spaces, a new lumber yard has been reviewed and issued a correction letter, and Dolores Way should see a new marble shop and some updates to other buildings. A new building with a bakery on the former Carbondale Animal Hospital lot is wrapping up review, while a large storage facility on Highway 133 has not yet applied for a permit. (Visit tinyurl.com/CdalePlanningStoryMap for a comprehensive overview of large land-use applications and projects under construction).

According to Building Official John Plano, several of the approved larger projects show a similar approach to the proposed Sopris Shopping Center replacement: “predominantly residential with some commercial on the first floor.”

Indeed, with a backlog of permits in RVR, residential seems to be where the real market is. But, Engel & Völkers Real Estate Advisor Mike Elkins pointed out, that’s likely to fuel commercial (and industrial) pressure down the line.

“I think it’s all going to be in high demand just because of continued growth,” he said. “There’s a lot of people just waiting to see how it shakes out.”

What is Qi? Tai Chi at the Library