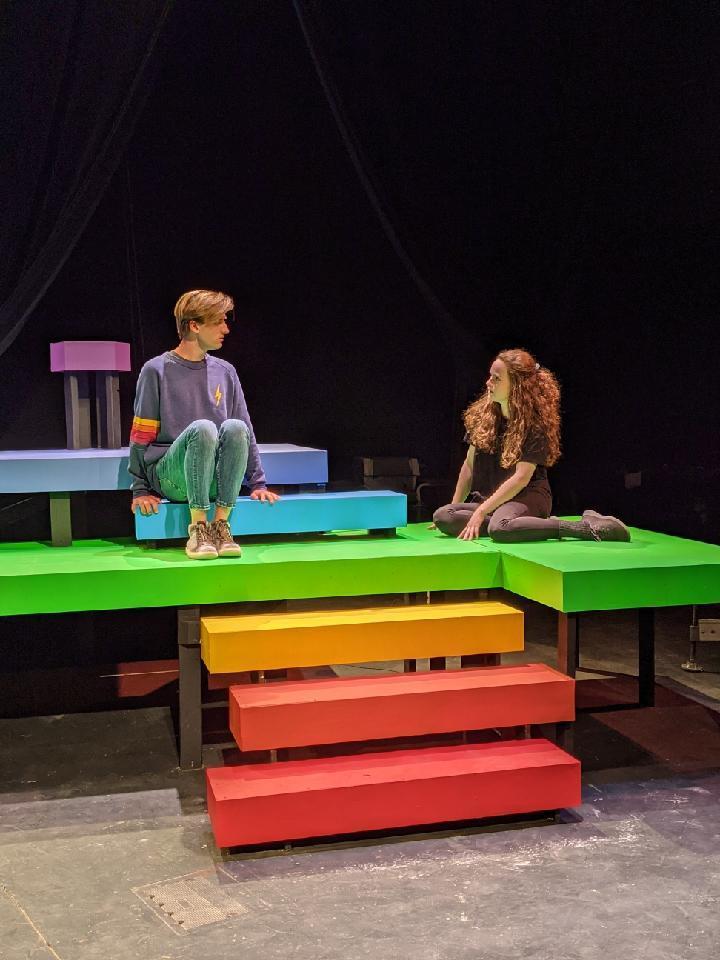 “Woody and Dumpling and the Journey Back to Normal” stars Luke Ryan and Maura Fawley and is available to stream for free at bit.ly/TRTCSoL

“Trying to share this with anyone I know that loves to smile,” reads a personal note from Sean Jeffries of Thunder River Theatre Company (TRTC). And how right he is! TRTC’s collaboration with Stage of Life Theatre Company (SoL), “Woody and Dumpling and the Journey Back to Normal”, is a heartfelt, uplifting and inspirational piece. It carries messages of acceptance, being one’s unique self and keeping it together through COVID-19.

Jeffries, the lead editor and videographer, and Director Jennifer Johnson of SoL bring the charming show to living rooms worldwide via the TRTC YouTube channel. The play has been available online for a couple of weeks and will likely continue until the end of June.

Viewing is free thanks to underwriter Lanie Bernhard who funded the entire show. “The act of underwriting really frees us up artistically, because it allows us to go forward and create without being bound by money woes,” says Jeffries.

Johnson wrote the underlying story herself, “but there are two scenes that were included in the script ‘Free to Be… You and Me’ by Marlo Thomas.” Johnson “was inspired by the feeling that everyone I know in the entertainment industry is dealing with… that we miss performing for our audiences, that we miss creating theatre together, and that it is getting harder and harder to do in empty spaces.”

Maura Fawley stars as Dumpling and Luke Ryan as Woody, making for a lovely and dynamic duo that really just want to make you smile. The two are accompanied by a slew of youngsters from SoL, a childrens’ theatre, who are interviewed between scenes about their 2020 experiences. Their juvenile insight is moving and relevant, leading the viewer to reflect on the past year and what it was like for themselves and the young community.

The show is in fact intended for kids yet is bound to incite thoughtful sharing between parents and their offspring. Even adults without children can benefit from the perspectives shared.

“I can’t even imagine what my six-to-10-year-old brain would do with that,” Jeffries says of the pandemic, “I’d be a mess.” He added that a common concern the kids shared was potentially losing someone dear to them.

Johnson can’t wait to have live performances for, or with, the thespian youth again.“The whole show is such a love note to our students and our audiences,” says Johnson. She wants the kids to know, “that we miss them,” and adds, “they bring so much to everything we do, whether in the audience or on the stage or in the classroom.”

While SoL has used the TRTC space to perform and do workshops before, this was the first time the two collaborated creatively on a production.

“It was an unmitigated joy to work with everyone who had a hand in this piece,” Johnson exclaims, “Beth [Fawley] and Luke [Ryan] contributed so much to the writing process, and were pretty self-directed. Sean [Jeffries] was such a wonderful sounding board and co-collaborator, and the show simply would not have been the same without him.” She added that she is “used to working in a bit of a bubble being the only full-time employee at SoL, so this collaboration meant a lot,” concluding, “I hope it’s the first of many.”

View the 30-minute production for free at bit.ly/TRTCSoL

Reptile Discovery by Didgeridoo Down Under