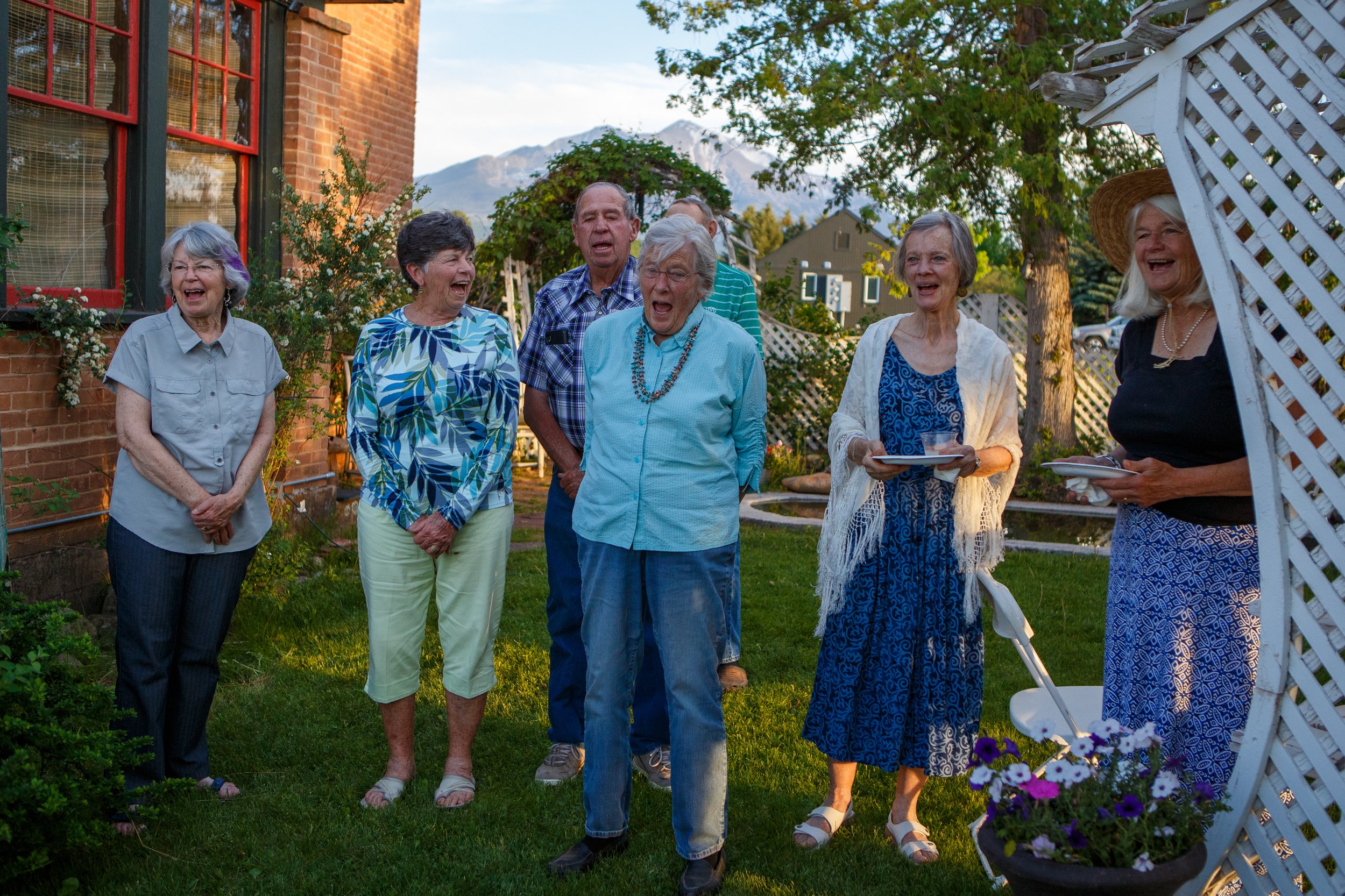 Sue Gray, executive director of the Carbondale Historical Society (CHS), called it “a small gathering to celebrate our Hattie.” On the evening of June 9, the group gathered in the side yard next to the Thompson House Museum to celebrate Hattie Thompson Holland’s 155th birthday.

Hattie was one of pioneer Myron Thompson’s eight children, of which seven moved from Missouri to Colorado. Gray said many settlers came to Carbondale seeking rich farmland. Like the Thompsons, many made their living with crops of wheat, barley, hay and, most of all, potatoes. The Hollands also raised sheep and cattle.

CHS began honoring Hattie, on her birthday, in 2019; however, last year’s event was canceled because of the pandemic. This year, it was a private invitation-only event, consisting mainly of Carbondale Historical Society donors, current and former board members, and Thompson family descendants.

Many people don’t know that Hattie was married three times, Gray said. First, at age 18, there was a marriage to an Aspen attorney named Charles Jones, who she divorced a year later.

“He filed the petition for divorce, and she did not show up in court, so about a month after the divorce was final, she married Oscar Holland,” Gray explained. The Hollands married in June 1887.

The original Thompson-Holland homestead was a modest one-story house built by Myron and presented to Hattie and Oscar as a wedding gift. As the Holland’s fortunes grew, so did their home, with the addition of a second story and an enclosed porch. Hattie lavishly decorated the interior with furnishings, ordered from catalogs at the Dinkel Mercantile Company and transported to Carbondale via the Rio Grande Railroad.

When Hattie was granted the divorce, she had her last name restored to Holland. In August 1944, she died as Hattie Holland and was buried next to Oscar, in the Holland family plot in Missouri. “So apparently, he was the love of her life,” Gray added.

Updates to the property include Paul Luttrell working his handyman magic to clean and fill the pond and repairing the waterfall to make it operational again. John Williams restored and painted the pond’s lighthouse replica last year, and Luttrell recently installed the light fixture. Gray explained the lighthouse is a replica from one at the Lighthouse Lodge in Wisconsin, a favorite vacation spot of the Hollands over the years.

Always civic-minded, Hattie took over Oscar’s seat on the board of directors of the Bank of Carbondale after his death in 1920. Although Hattie and Oscar had no children, many of her nieces and nephews enjoyed visiting the Thompson House.

Lewis Ronald (Lew Ron) Thompson and his wife, Jackie, continue to live on the property next door to the Thompson House Museum. Lew Ron’s father, Lewis Thompson, was bequeathed with Hattie’s fortune when she died in 1944.

Lew Ron, Jackie and their children are the last of the Thompson lineage currently living in Carbondale. Their son is living on the property in the former Holland carriage house.

Gray anticipates next year’s celebration will be open to the public. The theme will be “Hawaiian” because Hattie enjoyed visiting the islands and brought back Hawaiian music albums and many souvenirs. Gray shared, “We’re going to honor her love of Hawaii with a Hawaiian luau.”

Gray shared other exciting CHS news, saying a new Dinkel Mercantile Museum exhibit, located in the cabin on Weant Boulevard, will open at the beginning of July. “We’ve renovated the inside of the log cabin to replicate an old-time mercantile, and we’re calling it the Dinkel Mercantile after our first merchant in town.” It will have museum displays plus merchandise by local artists and producers for sale. And for those who remember this blast from the past – penny candy.

CHS is looking for volunteers to staff the museum, which will open on July 2. Hours will be from noon to 4 p.m., Fridays and Saturdays through September. If you are interested in volunteering, contact Sue Gray at info@carbondalehistory.org