Fire, on and off the agenda 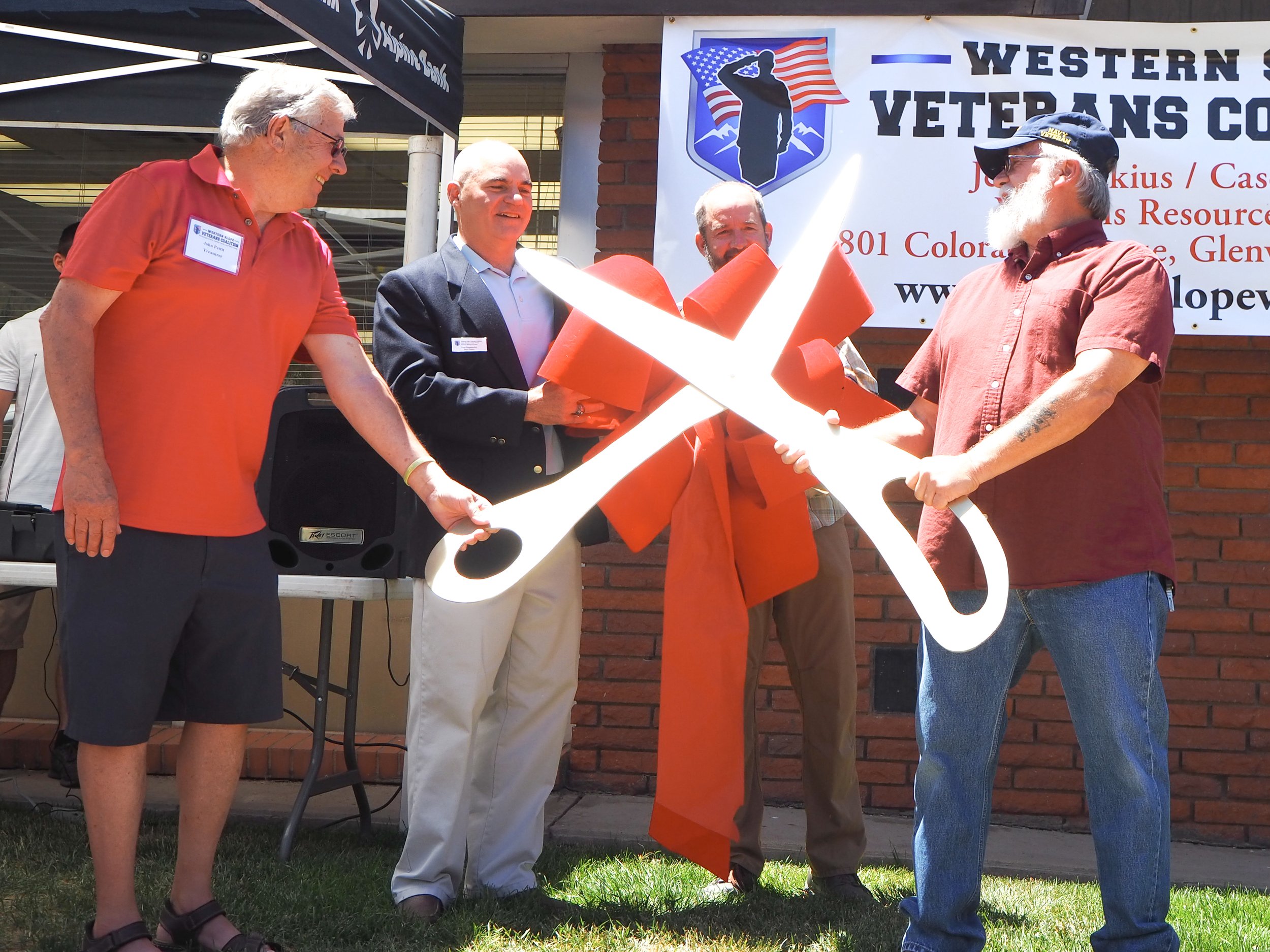 On Sunday, June 13, Wetern Slope Veterans Coalition celebrated the expansion of their Glenwood Springs resource center in patnership with Garfield County. The resource center also serves Pitkin and Eagle county veterans and "anybody passing through," president of the board Greg Rosenmerkel told The Sopris Sun. What began as providing weekly coffee and doughnuts has grown to include recreational space, computer access and a resource desk open Monday through Friday from 10 a.m. to 3 p.m. Many local organizations were in attendance and the Western Slope Memorial Day Riders rolled in with a $4,000 donation. Photo by Raleigh Burleigh.

Garfield Board of County Commissioners (BOCC) had a couple of short sessions during the first two public meetings in June.

The BOCC addressed public comments not on the agenda for the first hour of the June 7 meeting. A number of community members brought up wildfire management issues including the sale of fireworks and overall preparation.

In April, the board ruled that fireworks are not to be used over the summer, except for the month of June (May 31 through July 5) so as not to singe the freedom of patriotic expression. However, the county has not moved to outlaw the sale of fireworks at any time. Some attendees argued that trusting folks to purchase but not use fireworks is naive, and an extra measure to ban sales is warranted considering the current level of fire risk.

Community activist Debbie Bruell inquired what the county is doing to educate the community about fire prevention and response. Bruell believes there is not enough information coming from the county. “We would really like to hear more communication from you about what can be done and what is being done — that’s my main point,” she said.

Martin responded, “I think that’s a good point to make, and we’ll work on that and try to beef that up for you.”

Bruell went so far as to ask the commissioners if they support a fire ban in unincorporated lands. Chairman John Martin explained that the local fire districts and sheriff’s department would have to initiate a request for a ban, and that the BOCC cannot simply act of its own volition in this matter.

He added, “The federal agencies set their own fire bans, we don’t tell them what to do in their federal lands, only in the private lands and unincorporated areas is the fire ban good in the county.”

Commissioner Mike Samson brought up that state law designates a county sheriff as the county’s fire marshall. He suggested that Bruell speak with Garfield County Sheriff Lou Vallario, “about some of your concerns.” Bruell indicated that she would do so.

Colorado River Fire Rescue (CRFR) Chief Leif Sackett and CRFR board member Levy Burris addressed the BOCC during the public comment (not on the agenda) portion of the June 14 meeting. “CRFR is looking into the possibility of a ballot measure this fall for a mill levy increase for fire protection,” said Sackett. “Over the last four or five years we’ve had a steady decrease in our budget,” he continued, “in 2017 we took close to a $3 million hit and it’s stayed level.”

“We know that there’s never a good time for a tax increase,” Sackett acknowledged, “the public said no last May when we did this.” Last year, CRFR pitched for a single tax increase, whereas, “this time we’re looking into the possibility of a phased-in approach over time — so an increase in 2022, 2024 and 2026 to help ease that burden on the taxpayers across the board.”

Burris said that CRFR depends on funding to continue to be effective. Sackett added, “The big thing as we move forward, we’re at a point that if it fails we’re looking at closing another station, selling more apparatus and layoffs.”

Burris indicated that each of the municipalities they’ve met with so far have been supportive of increased funding.

“The possibility for some terrible fires again this year, I’m not telling anyone anything new, is extremely high — just extremely high,” said Commissioner Samson.

Later in the agenda, the commissioners unanimously passed a resolution to extend the fireworks ban to June 14 through July 5, effectively outlawing the use of fireworks for the duration of this summer season in unincorporated Garfield County.

Fire restrictions (as of June 18)

Stage 1 fire restrictions are in effect for:

• No fires of any type, including charcoal, in undeveloped areas

• No smoking except within a designated area, enclosed vehicle or building

• Campfires only in designated developed areas