Larry Day: thriving in the chaos 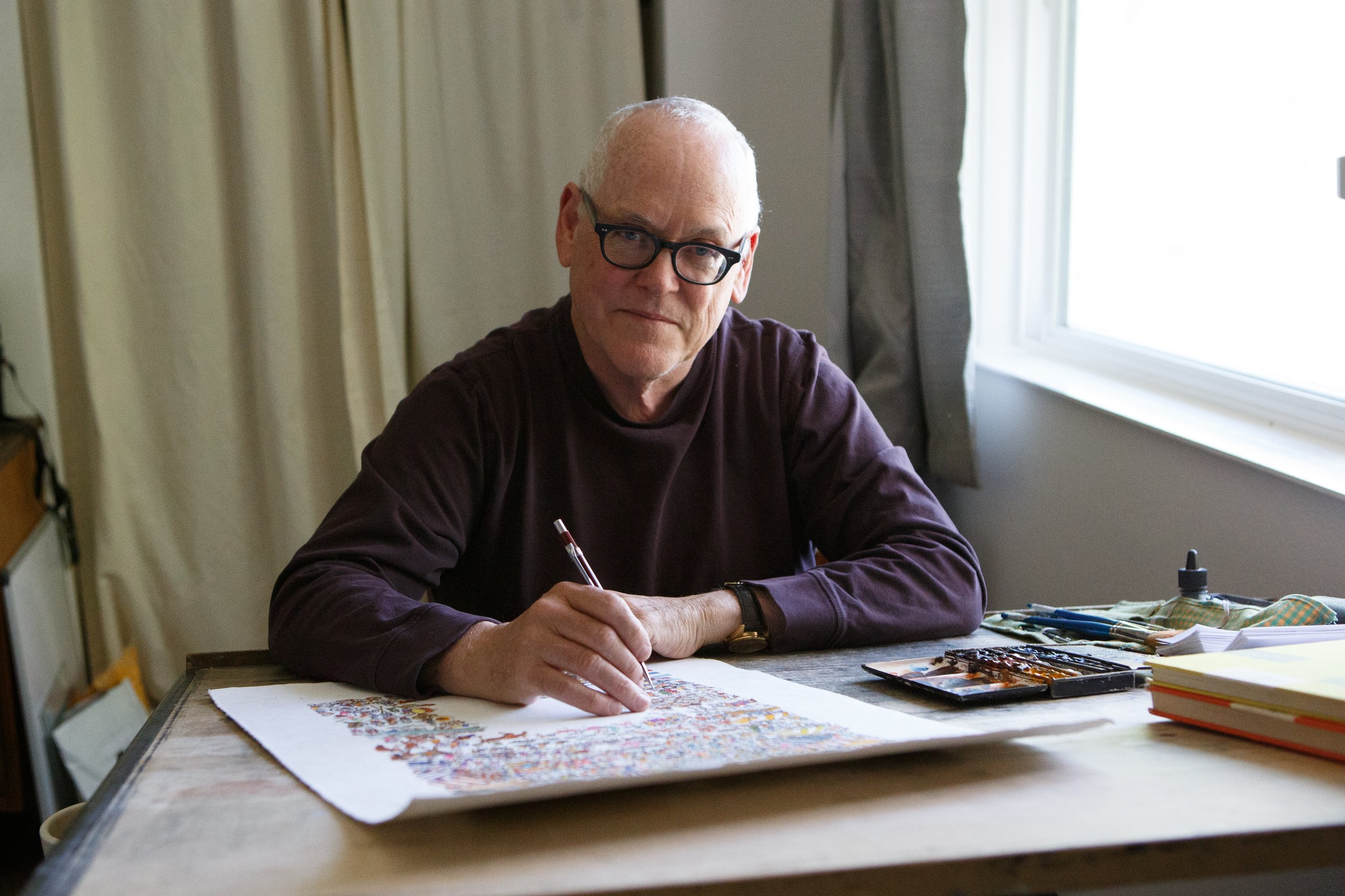 Larry Day is a jack of all artistic trades and a master of many. A cartoonist, painter, children’s book illustrator, advertising storyboard designer, technical illustrator and arcade game creative designer. Now he can add another title to the list — Carbondale Mountain Fair poster/t-shirt design winner, on the event’s 50th golden anniversary, no less.

“It was a clear choice.” Carbondale Arts (CA) Executive Director Amy Kimberly said of Day’s winning design, featured on this week’s cover of The Sopris Sun.

Brian Colley, CA gallery manager, said 33 designs were submitted this year. The process begins with design sketches submitted by artists. “We realized it was a lot to ask the artists to come up with a final, finished design and then not be chosen,” he said.

As Day recalled, the design submission almost didn’t happen. Even though he knew about the contest, he was hesitant to submit an entry. When he found out the deadline was extended, he and his wife, Miriam, delayed a trip to Santa Fe by a day to complete his entry.

He did not have any design ideas until he thought about his own experience of attending Mountain Fair, recalling, “It feels like total chaos. It feels like you’re swimming in a sea of people and I thought it would be funny to show this sea of chaos and in the middle of it is this couple sitting in chairs relaxing.”

Of the design itself, Day said there are no references to specific people, except for one. There was a request to place Kimberly in the design, represented by a blue elephant wearing a tiara. He also interspersed a few of his Sopris Sun cartoon characters.

Kimberly said, “To me, Larry’s poster is the quintessential representation of the socializing aspect. He’s captured it — all 50 years of what that socializing meant.”

Day and his wife had visited Carbondale frequently over the years and decided to move here in 2019, selling their home in Oak Park, Illinois.

He continues working in his 30-plus year advertising career, drawing storyboards for television commercials for major companies, like McDonald’s, Hallmark and Allstate Insurance, to name a few.

In his hometown of Gibson City, Illinois, one of his first jobs was working for a farm implement manufacturer. The job included working with the research and development department to draw technical illustrations for parts manuals. Of his newspaper advertising illustration career, Day recalled, it was a seven-days-a-week job, and “it was murder.”

In the 1980s, while working for an advertising firm in Chicago, he was part of a design team that created artwork for pinball machines and video games, in the era before handheld games, for Gottlieb, an arcade game corporation.

Around 1995, Day reached out to a children’s book agent about doing illustrations. He currently has over 20 picture books published and has collaborated with his wife, an author, on two of them. A few are available for purchase at The Artique gift shop in The Launchpad.

He said his cartoon work, which you will frequently find in The Sopris Sun, counts French cartoonist Jean-Jacques Sempé as a significant influence. Regarding Sempé’s work, “He loves to work with chaos, and I do also. I think that’s one of my philosophical roots — it’s to take chaos and to control it,” he reflected.

“One of the things that has always influenced me, about all my art — has always been a stalwart in inspiration — has been cartoonists,” he said.

His wife, he said, first noticed that about his work: an attraction to chaos and refining it. He recalled her saying, “‘You know, when you draw, you start with such chaos and then you start simplifying it. And then you don’t only simplify it, but you control it.'”

Day added, “My home environment was very chaotic. And I think that’s not unusual. I think we observe things in a different way. We see things around the corner. There’s an intuitiveness that we have.”

Of his internal process of creating, Day said, “everything I do is connected by story.” He added, “A lot of times, when I was a kid, I would go out and just start drawing in the neighborhood. It was kind of important to get out of the house and do something for myself. You don’t really realize what you’re doing; if you’re doing something for yourself, you only realize later on how all that adds up.”

“I’ve always strived, in whatever I do, to not be mediocre. There’s a lot of that. You can tell when somebody should go in a different direction because the one they’ve been working at, they’re working too hard. That’s why I think doing different things helps you not be mediocre; it takes you out of that tar pit.”