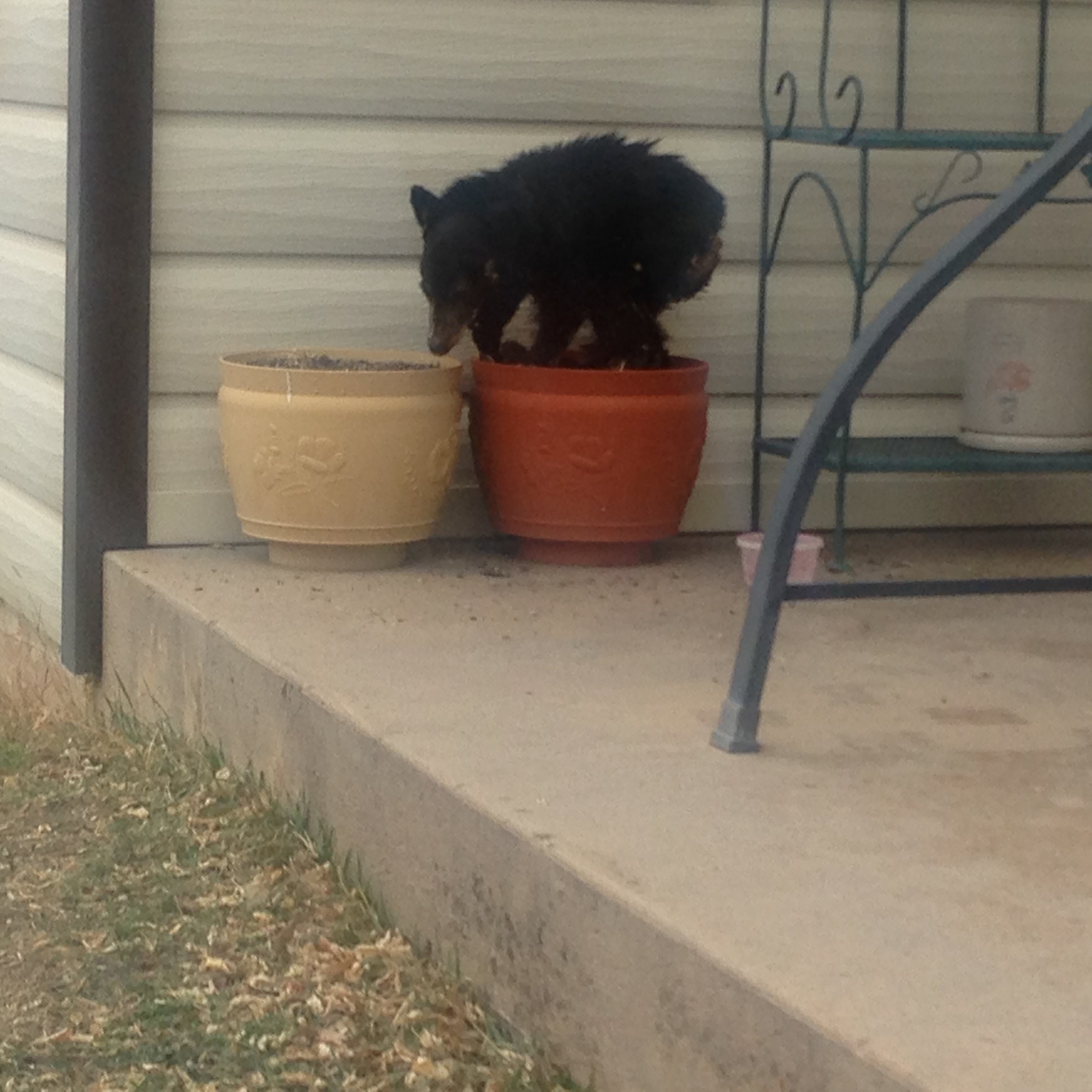 "Flowerpor Cub" is a source of inspiration for the Colorado Bear Coalition. The cub survived last summer's Cameron Peak Fire, the largest recorded wildfire in Colorado's history, and was rehabilitated over winter by CPW. Photo by Chuck Clausen at McC Ranch in Loveland.

One can imagine that for a hungry bear, emerging from hibernation or preparing to sleep for the winter, the temptations of civilization are difficult to resist. With human populations burgeoning in the West, urban sprawl encroaches increasingly into bear country, resulting in more frequent interactions.

A recent study by Colorado Parks and Wildlife (CPW) suggests that the rise in human-bear conflicts is not a result of growing bear populations — estimated between 17,000 and 20,000 in the state — but rather adaptation by bears to a quickly changing landscape.

“Most conflicts between people and bears can be traced to easily accessible human food, trash or other attractants with strong odors as a bear’s natural drive to eat can overcome its fear of humans,” educational materials on CPW’s website explain. “When bears become too comfortable around humans, they can destroy property or even become a threat to human safety.”

Snowmass resident Daniela Kohl founded RFVBC, a volunteer-based nonprofit, in response to negative human-bear interactions in the Aspen area and the unfortunate consequences for bears that repeatedly demonstrate problematic behavior.

CPW has a policy that states “Any previously translocated bear that is currently judged to be dangerous because of its location shall be destroyed.”

CPW Area Wildlife Manager Matt Yamashita, who supervises the Glenwood Springs, Aspen and Vail area, insists that, “much of the policy is aimed at preventing or mitigating conflict before it becomes severe enough to warrant euthanization.” Yamashita continues, “The goal of every wildlife officer in Colorado is to perpetuate the wildlife resource, not eliminate it.”

Kohl got curious about how citizens could help and got involved with local CPW agents, including Yamashita, to organize solutions. Early on, this resulted in a dynamic partnership with Aspen’s Boy Scouts of America Troop 201.

Together with the troop, Kohl began reproducing an engineer-friend’s design for heavy-duty straps used to bear-proof trash cans. The straps remain effective in below-zero temperatures and use “the strongest buckles ever,” according to Kohl. She is working on having the design tested by Interagency Grizzly Bear Study Team protocols to prove their merit.

Kohl was prompted by the restrictive cost of bear-resistant trash cans (upwards of $280) and, thanks to Troop 201, is able to offer these straps for free (for more information, call 1-305-710-2977). The project earned a boy scout his “Eagle Scout Rank Patch” and RFVBC gained a crucial ally.

“The kids are fantastic, humble and hardworking,” Kohl explained. “The parents are involved and I am very lucky to have found them.” Beyond creating straps, they have also canvassed with door hangers to inform neighborhoods about the importance of securing trash.

Kohl draws inspiration from Brenda Lee, who started working on behalf of bears in 2009 and founded the nonprofit Boulder Bear Coalition in 2015. According to Kohl, “Brenda paved the way.”

After moving to Colorado in 2006, Lee was alarmed by a division she saw in Boulder’s community over the handling of human-bear conflicts.

Lee began asking, “Why are bears here?” They’re here because they’re hungry. And frankly, she determined, “We’ve created a beautiful habitat for bears in Boulder. It used to be grasslands, now there are farmer’s ditches and big trees and trash unsecured.”

So the city and community stepped up, with a common goal of protecting the bears. This eventually led to a novel strategy: planting native food sources in open space on one side of Boulder to provide a “natural food buffer” of chokecherries, wild plums and currants.

For two years, the coalition, in partnership with the city’s plant ecologist, planted hundreds of rootstock at two different locations with camera traps to monitor the results.

Their theory is that bears will have less of a reason to seek food within cities if nourished on a proper diet. “It just makes sense,” Lee told The Sopris Sun of making open spaces healthy for wildlife.

The plants have taken time to grow and there is not yet conclusive data about the strategy’s effectiveness. Lee acknowledges that, compared with eating solely berries, filling up on trash is an easier way of attaining the 20,000 daily calories necessary for a healthy hibernation. “Imagine, eight hours of eating berries, or come to town and fill up in an hour.”

Any true solution will be multi-faceted. Still, the rise of coalitions to protect bears speaks to a movement grounded in respect for coexistence. The Nuche (or Ute) that inhabited these “shining mountains” previous to the valleys’ settlement by prospectors, revered the bear with an annual dance – among their most ancient. This “bear dance” ceremony related the bear’s growl to the spring’s thunder, imitated on rasping instruments.

The Roaring Fork Valley Bear Coalition has a strong presence on social media. To learn more about the Colorado Bear Coalition, visit coloradobearcoalition.org