Prepared and on high alert 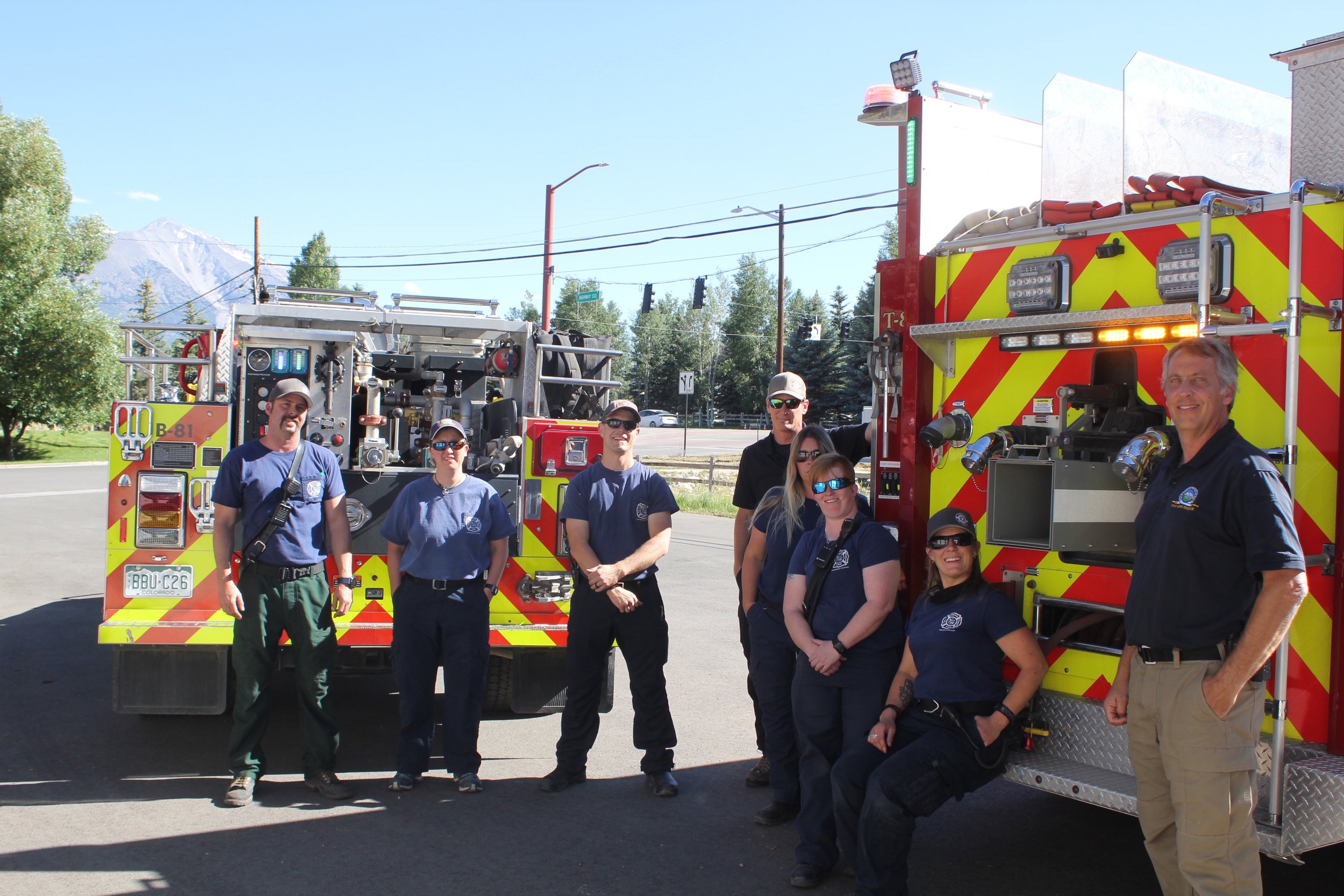 Shift Team B gathered behind two of the department's brand new vehicles for a photo the afternoon of June 21. There is good reason for being concerned about this year's extremely dry conditions. Fortunately, this crew is always ready to fight a blaze. Photo by James Steindler.

Fires break out, one after the other, and Coloradans know from the smoke in the air before hearing the news. The ongoing drought has deepened into what’s now the tenth driest year in the past 127, according to the National Integrated Drought Information System (drought.org). Already, wildfires are appearing throughout the western United States and stage one fire restrictions are in effect for our surrounding area.

“We are on high alert this year,” says Operations Chief Mike Wagner with Carbondale and Rural Fire Protection District (CRFPD). He adds that the team is not nervous but prepared.

CRFPD uses the same shift schedule as other regional fire departments to stay in sync with one another. Firefighters are on site 24/7, waiting to battle flames. A shift lasts 48 hours and the rotation never stops during fire season.

“CRFPD [covers] roughly 300 to 320 square miles: Missouri Heights to McClure Pass and over toward Marble, down to basically the CMC turn off and Blue Lake,” says Wagner. However, if needed anywhere, they’ll heed the call.

“We have to rely on each other,” he says, “there’s no other way to do this.” He offered the Grizzly Creek Fire as an example, “We were there within the first hours or so giving mutual aid, and involved in the initial phases – same with the Lake Christine Fire.”

Those responses were part of a local mutual aid agreement between neighboring departments, “and we also have what’s called mountain area mutual aid,” says Wagner, which spans a larger geographic region.

It doesn’t stop there, he explains, “there’s a whole system set up with the state and federal governments of a resource ordering process.” Currently, by way of this networking system, two CRFPD employees are assisting with the fires in Southwest Colorado.

Knock on wood (while it’s still there) because in recent years the CRFPD has not seen fires within its jurisdiction of the magnitude neighbors have endured. “We’ve had many fires that we’ve kept small,” says Wagner.

“Right now, as we speak, we have two fire brush trucks – one on the north end  [of the district] and one on the south end.” He continues, “Their main job is, if we get a start of a fire, to be the initial attack and to keep that small fire small.”

The team traces lightning strikes and reports to the respective latitude and longitude to check for smoldering trees, where flying embers could ignite a wildfire.

What you can do

As Smokey says, “Only you can prevent forest fires.” While lightning is out of human control, he is right that most fires are preventable. Campfires, cigarette butts, combustion engines and fireworks are leading causes, and each is addressed under current stage one restrictions.

Homeowners within the district who are interested can contact CRFPD for a free consultation on how to prepare their home for the fire season.

“It’s important to learn how to live with wildfires,” explains Wagner, because they aren’t going away anytime soon.