Bio queen steps on the scene 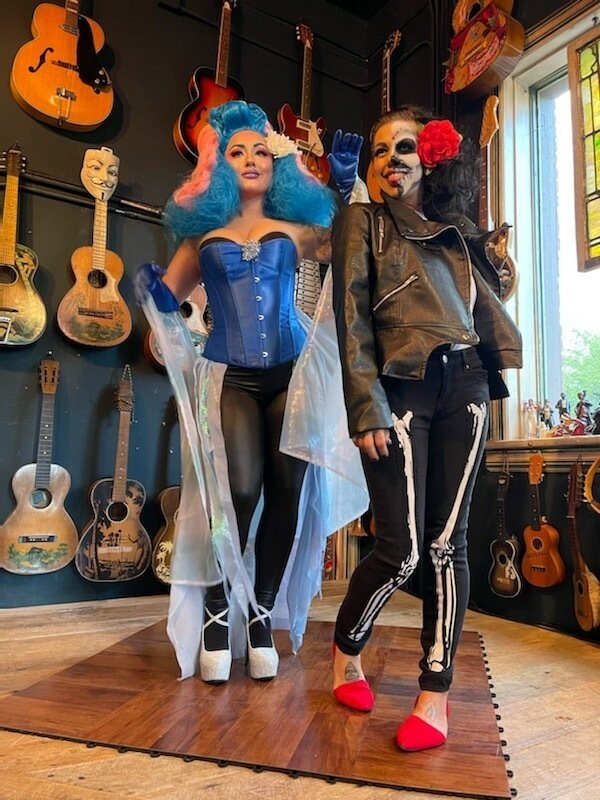 Drag shows are few and far between in the Roaring Fork Valley, so it was especially exciting for local fans of the scene to hear there would be a performance at Steve’s Guitars. Performers walked the runway and sashayed away just like the queens who came before them.

Drag seen today is derived from a marginalized transgender and gay community and, in recent history, has been a means of expression and rebellion. Drag culture has become widely popularized with hit television series such as RuPaul’s Drag Race and folks of all walks of life are captivated by the art form.

Interestingly, the term “drag” likely comes from the dress-like attire men would wear during performances that would drag on the ground. In Shakespeare’s day, in accordance with church law, women were not allowed to perform on stage so men would play the parts of female characters, like Lady Macbeth.

Lily Surls and Josephine Cruz put on the local drag show, June 25, for a $35 entry fee. Surls, the primary performer, goes by the stage name Lily Deville and Cruz, who emceed, by Venus La Tarte.

Advertising for the show may have slipped by those who would have been interested, since the venue was only confirmed two weeks before opening. With limited time, Surls and Cruz pulled up their bootstraps and, “were inspired to bring this vision to life and hopefully raise some money for an LGBTQ organization in the process,” Surls told The Sopris Sun.

A portion of the profits go to Rainbow Alley, a Denver based organization meant for LGBTQ+ adolescents. “They provide a safe space for LGBTQ youth to spend time and access resources that can help them reach adulthood with healthy mentorship,” Surls explained.

Notably, all the performers in this show were cisgender women, meaning they were women at birth and identify as women today. Merriam Webster defines “cisgender” as, “of, relating to, or being a person whose gender identity corresponds with the sex the person had or was identified as having at birth.” It’s essentially the opposite of being transgender.

“We are cis-women performing drag,” said Surls, “sometimes referred to as ‘bio queens.’” Bio queens have debuted in recent seasons of RuPaul’s Drag Race and are steadily making their way onto the scene.

According to Surls, at this performance, “the turnout was interesting, as many audience members left over each of the acts, leaving us with just a few friends and family members by the end.”  Although she “wasn’t at all shocked by that,” given, in part, “that I’m a bio queen and not an identifying male in drag.”

Drag in the 20th century was born in spite of societal maltreatment of the LGBTQ+ community, and events were largely done in secret, to which the outside world was oblivious to, or often claimed to be disgusted by.

“We study our history, honor the path that paved the way to where we stand today and seek to explore how each art form is most relevant in expressing our humanity and meeting the needs of its artists as it evolves,” Surls explained.

In this day in age, to Surls it’s about art, not gender. “I won’t go into detail on my gender identity or sexuality for my art to be validated,” she proclaimed, “and the beauty of drag is that I don’t have to. My drag is an authentic artistic expression of the styles and behaviors traditionally assigned to women, and a rebellion against them at the same time.”

While some argue that women doing drag is cultural appropriation, others clap back and remind that leaving women out may be oppressive in itself — think of Lady Macbeth’s day.

“It’s challenging in a different way to see a woman perform drag since it’s inherently sexualized or looked at differently than the ‘spectacle’ or ‘art’ of a man performing drag,” said Surls. “This is an important topic in the evolution of drag art, and one that I’m curious to see play out at my own shows.”

If you missed it, this won’t be the last of Lily Deville’s (Surls) local drag performances; so stay tuned and stay sassy.