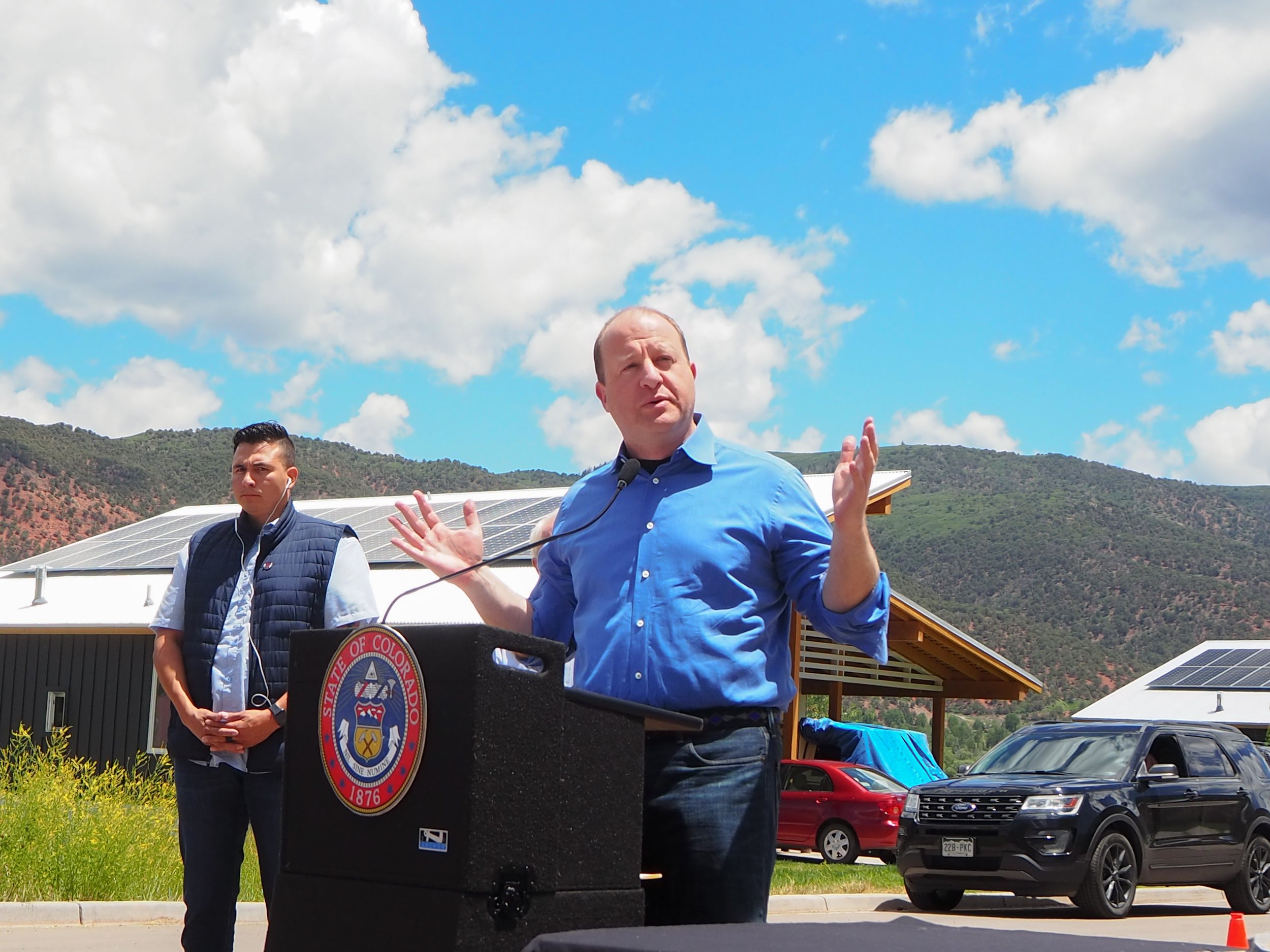 Governor Jared Polis visited the Roaring Fork Valley during on a busy Sunday, June 27; signing bills in Silverthorne, Basalt and Eagle. At the Basalt Vista Affordable House Community, Polis met with officials from Pitkin County, Holy Cross Energy board members and Habitat for Humanity representatives. Two bills were signed, the first (HB21-1271) supports local governments with grants for innovative affordable housing strategies; the second (SB21-060) aims to expand broadband access and afford-ability and was presented by Representative Dylan Roberts (left). Before zooming off to Eagle, Polis joined a tribute to essential workers at the Benedict Music Tent in Aspen. Photos by Raleigh Burleigh.

The Colorado Outdoor Recreation and Economy (CORE) Act hit an impasse when the U.S. Senate let the bill lapse in the 2020 legislative session before ever reaching the floor. The CORE Act is back for another round, only now with the backing of President Joe Biden.

If made law, the CORE Act would protect more than 400,000 acres of public lands in Colorado, including over 200,000 in Thompson Divide.

In February 2021, it passed the House of Representatives with bipartisan support as part of a larger bill: HR-803 Protecting America’s Wilderness and Public Lands Act. On March 2, it was introduced to the Senate, read twice, and referred to the Senate Committee on Energy and Natural Resources (SCENR).

On June 16, after a SCENR hearing pushed forward by Senator John Hickenlooper – sponsor of the bill – the Biden administration pledged its support. The CORE Act, “furthers the administration’s goals of restoring balance to the management of our public lands and waters, creating jobs and increasing recreational opportunities,” said Bureau of Land Management Deputy Director Nada Culver.

The legislation fits right in with Biden’s “America the Beautiful” initiative, aiming to conserve 30 percent of the nation’s lands and waters by 2030 through locally-led efforts.

“The CORE Act, in a very real way, is a model of how political engagement should be conducted,” Hickenlooper said at the hearing. “It represents almost a decade of thoughtful engagement with ranchers, hunters, outdoor recreationists and anglers, as well as county commissioners and so many other local officials.”

When it comes to Thompson Divide, locals know the senator is right on the money. The Thompson Divide Coalition (TDC) has been fighting oil and gas permitting on the 220,000-acre land surface for over a decade.

TDC began as a group of local stakeholders made up of ranchers, recreationists, conservationists, government officials and anyone else who cared to join.

Back then, the local non-profit Wilderness Workshop (WW) took its seat at the table. Its website reads, “In the late 2000s, when the threat of oil and gas development in the Thompson Divide became apparent, WW and a cast of ‘strange bedfellows’ joined together to form the TDC with the goal of eliminating the threat of gas drilling from the area.”

“Whether people are hunters, hikers, mountain bikers, county commissioners or ranchers, we know that Coloradans, especially in the 2nd and 3rd Congressional Districts, support the CORE Act in overwhelming numbers,” said Will Roush, WW Executive Director. “This broad and diverse support stems from the amazing and dedicated work that communities and local stakeholders have invested for more than a decade to craft the elements in the CORE Act.”

When the CORE Act was slated for a Senate vote last year, local Judy Fox-Perry had this to say, “The Thompson Divide Coalition has been working for over a decade to protect the long term viability of grazing, hunting, and recreation that have supported and been enjoyed by many generations of my family and other families on the public lands of the Thompson Divide.” She continued, “The watersheds, wildlife and healthy biodiversity of this keystone parcel of mid-elevation, productive habitat on public lands is invaluable to the ranchers and all who base their livelihoods on resources from this outstanding landscape.”

More recently, local rancher Bill Fales said, “As a rancher who relies on the Thompson Divide for our summer grazing, I am hoping for the passage of the CORE Act. It will bring needed protection to this area which is so important to myself and fellow ranchers and also for the entire community who utilizes these amazing lands for hunting and year-round recreation.”

In spite of local advocacy, U.S. House Representative Lauren Boebert sees it differently. “The CORE Act is a partisan land-grab promoted by big-city Democrats who aren’t affected by the land-use bureaucracy that they are shoving down rural Colorado’s throat,” she said.

Because the bill was submitted earlier in the year, it has a better chance of reaching a Senate vote. If the Senate passes, it will go to Biden’s desk to be signed into law.