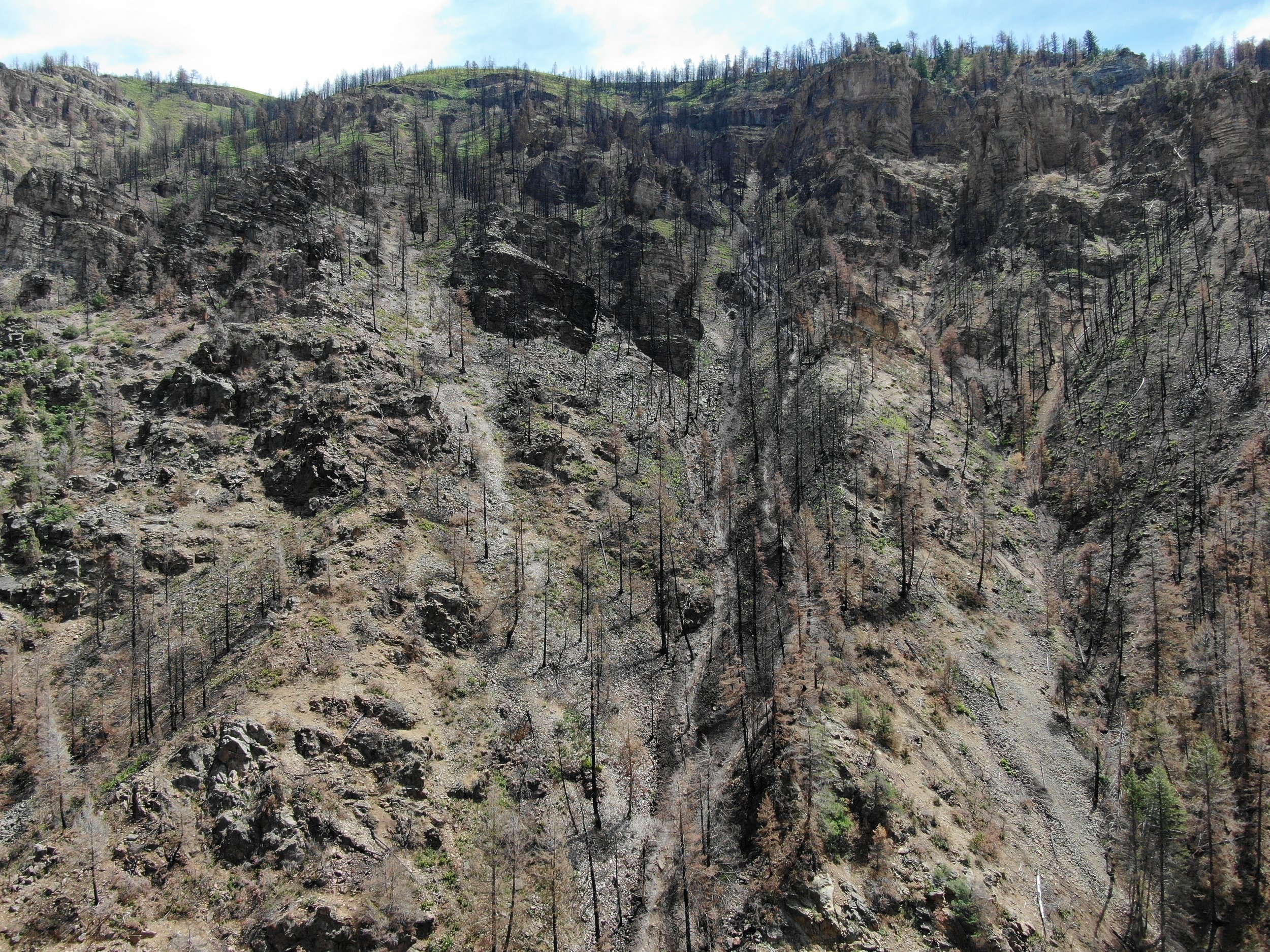 The steep, rocky terrain that burned in the Grizzly Creek fire is erosion-prone. This shot shows an area in the No Name creek drainage that was part of the June 26 debris flow. Image courtesy of the City of Glenwood Springs.

On Saturday, June 26 and Sunday, June 27, rain on the Grizzly Creek burn scar caused flash flooding and debris flow. The Colorado Department of Transportation (CDOT) reported that the slide on Sunday left a debris field approximately 80 feet wide and up to five feet deep.

The multiple mudslides caused long closures on I-70 while CDOT crews worked to remove material blocking the road. Since then, additional Glenwood Canyon closures have occurred due to flash flood warnings.

In addition to transportation woes, debris flowed into several waterways, including No Name Creek and the Colorado River, impacting water quality.

According to Dave Kanzer, director of science and interstate matters for the Colorado River District, “Conductivity, turbidity and dissolved organic matter are important parameters for drinking water providers to understand as they are very hard to remove, can clog filters and can cause harmful disinfection byproducts in drinking water supplies.” These parameters are continuously measured by the United States Geological Service (USGS) and monitors showed several short-term spikes in these categories.

Due to debris flows, the City of Glenwood Springs saw turbidity measurements in No Name Creek, one of their water sources, rise from a normal of 2-10 NTU to 2,500 NTU. NTU is a unit for measurement of cloudiness in water. These high levels of turbidity slowed their system’s ability to treat water which led to a draw-down on water tanks. This reduction in processing speed led the City to enact temporary water use restrictions, primarily on outdoor water use. The City of Glenwood uses about four million gallons of water per day in the summer, the majority for outdoor purposes.

In a June 27 press release, Public Works Director Matt Langhorst said, “There is plenty of water coming down the mountain side, it is just so filled with debris that the process of treating the water has slowed.”

After the Grizzly Creek fire burned parts of the watershed that Glenwood Springs relies on, the City made several improvements to their water system to increase resiliency. Again, Langhorst. “Without the upgrades made at the water treatment plant, at the intakes and the No Name Tunnel, we probably would not have been able to produce water at all.” Improvements included stabilization of the banks around their water intakes, a gate that shuts off water intake automatically when sediment levels reach a certain threshold and additional technology at the water treatment plant that allows the system to handle extreme sediment levels.

Erosion is a common occurrence on burn scars. In the Burned Area Emergency Response assessment from fall of 2020, Team Leader David Callery reported their team “expects erosion and run-off within much of the Grizzly Creek burned area to increase, especially where soils burned more severely.” 55 percent of the 32,370 acre fire burned moderately or severely. Wildfire can lead to erosion not only because of the loss of moisture-absorbing vegetation, but severe fire can alter soils and create layers that repel water. Flash flooding can occur for many years after a wildfire.

CDOT relies on weather experts to monitor the potential for rainfall in Glenwood Canyon, which leads to Flash Flood Advisories or Warnings, and allows them to take the precaution of closing Glenwood Canyon and evacuating travelers.

The Middle Colorado Watershed Council recently received funding from the Colorado Water Conservation Board to place rain gauges in Glenwood Canyon. The placement of these gauges was determined in partnership with CDOT, USGS, and the National Weather Service. These gauges should improve awareness of incoming storms and aid the National Weather Service in providing more information about the potential for flash flooding. This will allow CDOT to better assess whether Glenwood Canyon closures are necessary. 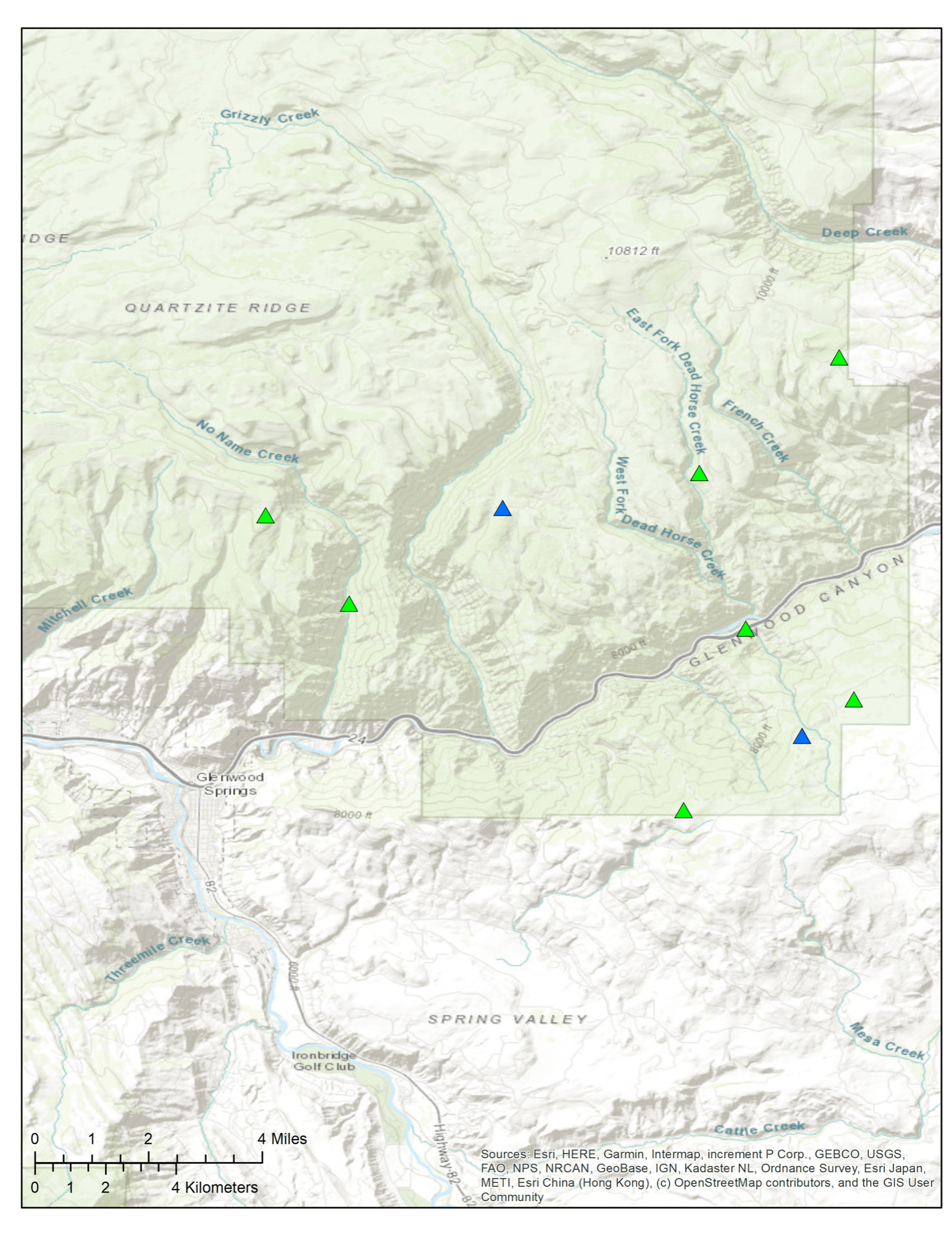