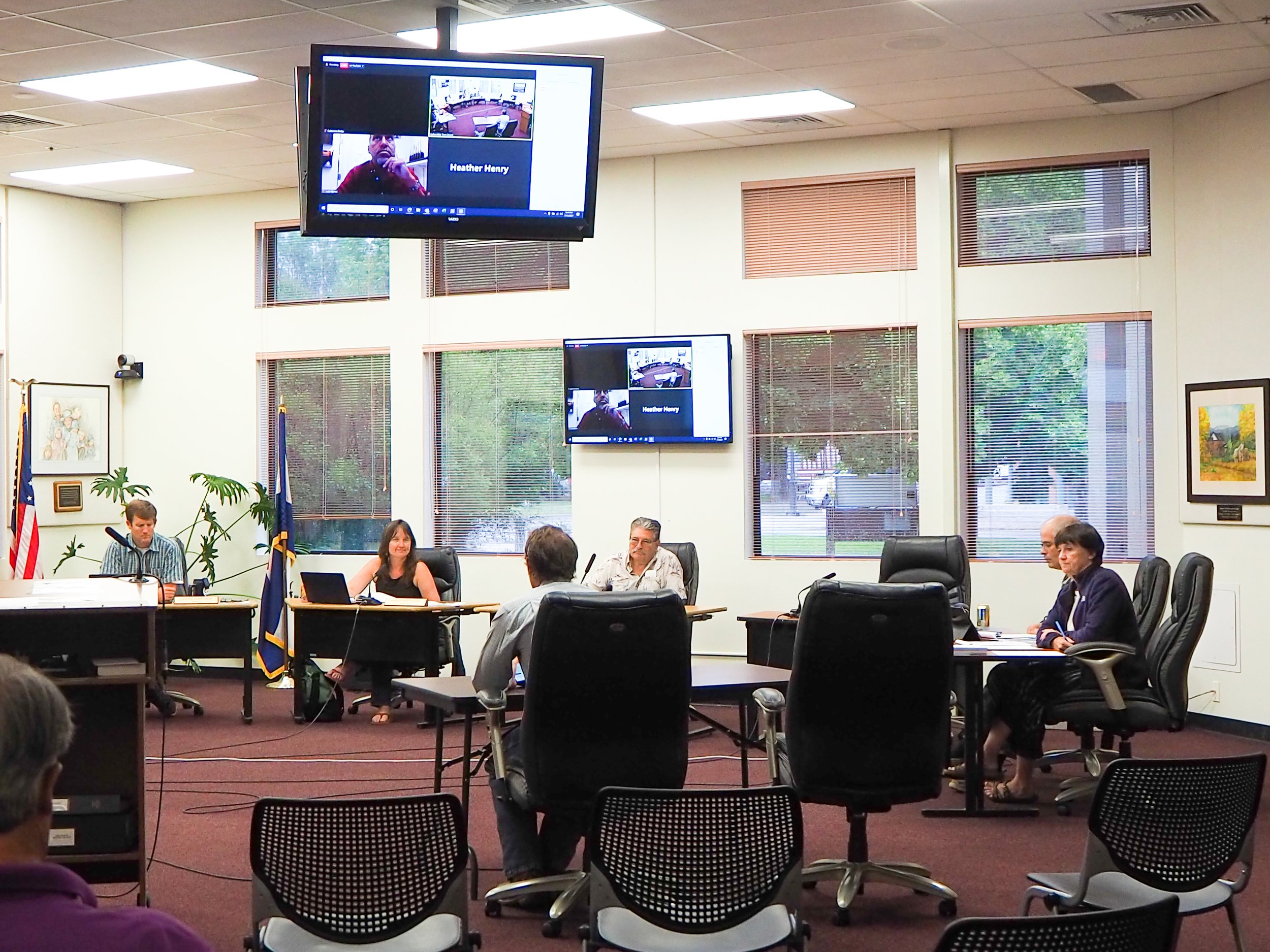 Carbondale Trustees meet for their first hybrid meeting in 2021. Photo by Raleigh Burleigh.

On Tuesday, July 13, Carbondale trustees met for their first regular hybrid meeting. The meeting room is now expanded thanks to a retractable wall and four large television screens that broadcast a Zoom feed of remote attendees. A camera simultaneously streams the board on YouTube, speaking into microphones that amplify to the room and over the web. This strategy was first tried in October then put on hold with a second wave of illness impacting the country. The hybrid function will continue indefinitely, as another way to encourage public participation.

Attending in-person: Mayor Dan Richardson, Lani Kitching, Erica Sparhawk and Marty Silverstein. Meanwhile, Heather Henry and Luis Yllanes joined via Zoom and it was mostly seamless, despite some occasional lag. Ben Bohmfalk was not in attendance. “Y’know, it’s a brave new world. I have to get used to this,” commented Silverstein.

Trustees breezed through the consent agenda and several liquor license approvals, then heard from the public on items not on the agenda before each delivered an update on their respective areas of interest and engagement. All public meetings are archived on the channel “Town of Carbondale” on YouTube.

Aspen Valley Land Trust (AVLT) came before the trustees to request additional funds to help with the acquisition and preservation of Coffman Ranch, 35 acres of wetlands with nearly a mile of river frontage east of Carbondale. AVLT agreed to purchase the property for $6.5 million, a discounted price that Rex and Jo Coffman offered to see their ranch protected into perpetuity as a thoughtfully-managed community asset.

“I think we’ve all noticed we have a few new people in town,” remarked Mayor Richardson. “We’ve seen a lot of agricultural land converted to housing and that’s okay as long as we preserve some key areas, whether it be for a wildlife corridor or for river access or for regenerative agriculture… We get into trouble when we aren’t conserving enough land.”

Trustees unanimously agreed to approve AVLT’s funding request of $25,000. Learn more about the project at avlt.org/coffman

Next, Red Cunningham came before the trustees asking that the town waive rental fees associated with a recently purchased events stage. The request was approved. Cunningham and his wife Julie are hosting a free concert with donations accepted to benefit the ALC Foundation, created in honor of their daughter, Anna Cunningham, who lost her battle with Ewing’s Sarcoma in 2019 at the age of 16. The ALC Foundation offers support to children and their families diagnosed with pediatric cancer. The concert takes place on Friday, July 16, at the River Valley Ranch driving range and features acclaimed singer/songwriter Brett Dennen with local band Shady Lane opening the show. V.I.P. tickets are available at ALCfoundation.net

The donation of a passive park, Ramey-Harvey Park behind Crystal Meadows along Graceland Drive, was accepted by the town with the criteria that the park not be built on.

A replacement judge and special prosecutor were granted the town’s approval to proceed with a legal case that involves a town employee who was bit by a dog and has a working relationship with the town prosecutor.

The final item of Tuesday’s agenda was alluded to throughout the meeting. After 10 years of diligent work on behalf of Carbondale, Town Manager Jay Harrington will be stepping away on Sept. 10 to take a job as manager of Routt County.

“It’s been a wonderful ten years,” Harrington told trustees. “Thank you for the opportunity.”

Harrington suggested that 10 years may just be “the sweet spot” for a town manager, and new leadership could be healthy and beneficial for the town. In the next 60 days, Harrington will assist with lining out the budget along with a few other big items.

Trustees agreed with Harrington’s assessment that the process of hiring a new town manager should begin with contracting at least one recruitment company that is familiar with the area, then proceed methodically with community engagement. “We’d be crazy not to have a consultant and crazy to entertain consultants that don’t know our candidate pool well,” said Mayor Richardson. “While probably not the hardest thing, this could possibly be the most important thing that we do as a board.”

Harrington’s career began as a planner for La Plata County and has taken him intimately into the folds of Pagosa Springs, Telluride and Cortez. He beams about Carbondale’s staff expertise and the community’s way of showing up during challenging times. “It’s been a great community to raise my son.”