Recovery from wildfire can take a generation 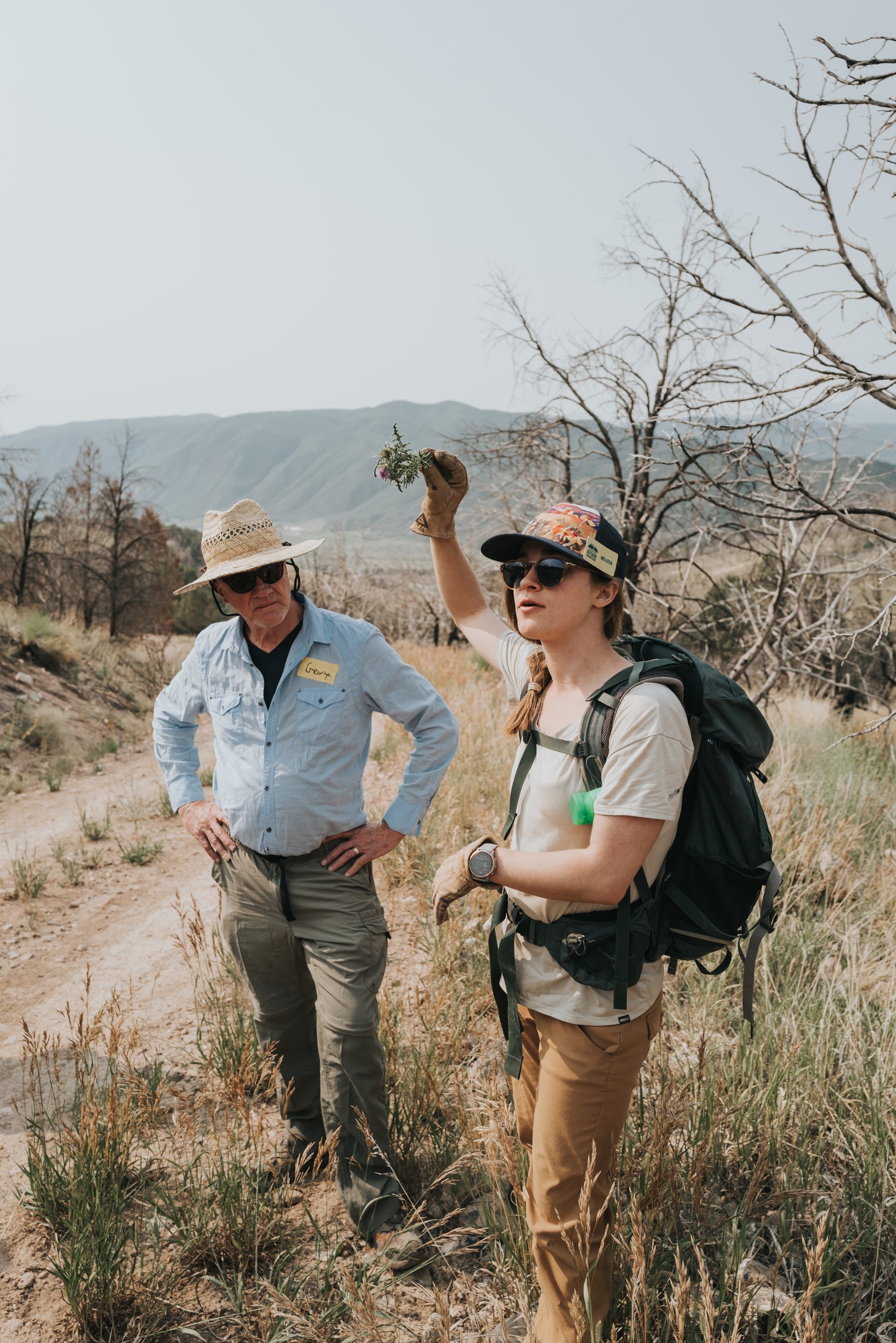 Melissa Daniels, program manager at Roaring Fork Outdoor Volunteers, holds up a plumeless thistle. On July 11, volunteers worked to limit the spread of weedy thistles on the Lake Christine burn scar at the Basalt Wildlife Area. Photo by Olivia Emmer.

On Sunday morning, July 11, a crew of about thirty volunteers assembled at the Basalt State Wildlife Area, over 2,000-acres managed by Colorado Parks and Wildlife (CPW). They were organized by Roaring Fork Outdoor Volunteers (RFOV) and CPW to combat invasive thistles on the Lake Christine burn scar. RFOV has now brought volunteers to this site for three years in a row. Year one saw community members seeding the burn scar and year two kicked off their effort to suppress weeds. This year’s event also featured educational support provided by the Aspen Center for Environmental Studies (ACES) and the Roaring Fork Conservancy.

While there are native species of thistle in this region, native plants are often out-competed for resources by non-native species of thistle — in this case, plumeless thistle and musk thistle. These spiky invasive plants can quickly take over if left to their own devices. Plumeless and musk thistles are biennial, making showy purple flowers in their second year before dying back. If the flowering heads are removed before going to seed, the life cycle of the plant is interrupted.

According to Peter Boyatt, district wildlife manager for CPW, the hillside above the parking lot where the volunteers gathered used to be covered with weedy thistles. 2020’s group of volunteers spent most of the day on that hillside. One year later, there’s barely a thistle in sight.

This year, the group hiked further up into the burn area, and removed an estimated 800 pounds of thistle flowers — approximately 30 pounds per volunteer. One thistle flower can release more than 50 seeds, and the seeds can persist in the soil for about 10 years, so the group prevented thousands of potential thistle plants.

If these species are better adapted to taking over than native plants, why is their proliferation a bad thing? “The term invasive typically gets used for a species that outcompetes other species and creates a monoculture.” Says Adam McCurdy, forest and climate director at ACES. “We’re losing a lot of biodiversity, and with that biodiversity, a lot of system function and system resilience.”

When it comes to recovery after wildfire, the timeline varies depending on the ecosystem that burned. Again, McCurdy: “The frontside of Basalt mountain might never look like it did before the fire. We might see more of a grassland, shrubland ecosystem there rather than a piñon-juniper forest.” Piñon-juniper forests can take 50 years or more to re-establish, though it’s possible a different forest-type will take hold instead. While piñon-juniper forests are not well adapted to fire, Gambel oak root systems survive fire well and are already visible as new patches of green on the burned hillsides. Additionally, the ecosystems that fill in may be what you would expect in a warmer and drier climate, as has been observed after other fires in the state.

Trish O’Grady was one of the volunteers on Sunday. O’Grady was eager to see how the wild area regrows after the fire. “I was on the restoration about two years ago, the first season after the burn. I came up to the area for the seeding — we just literally threw seed around. It’s become an area that I want to keep coming back to, to see what’s happened, to see that there’s some vegetation again.”

“This volunteer day and project is part of the long process of fire restoration,” said CPW’s Boyatt. “What results after fire is weeds and we’ve been hammered by them. It’s a big property and we’re very limited on resources to manage it, as is every land management agency. Being able to combat this thistle and utilize volunteers in areas we can’t access mechanically, we’re getting a good hang on it.”