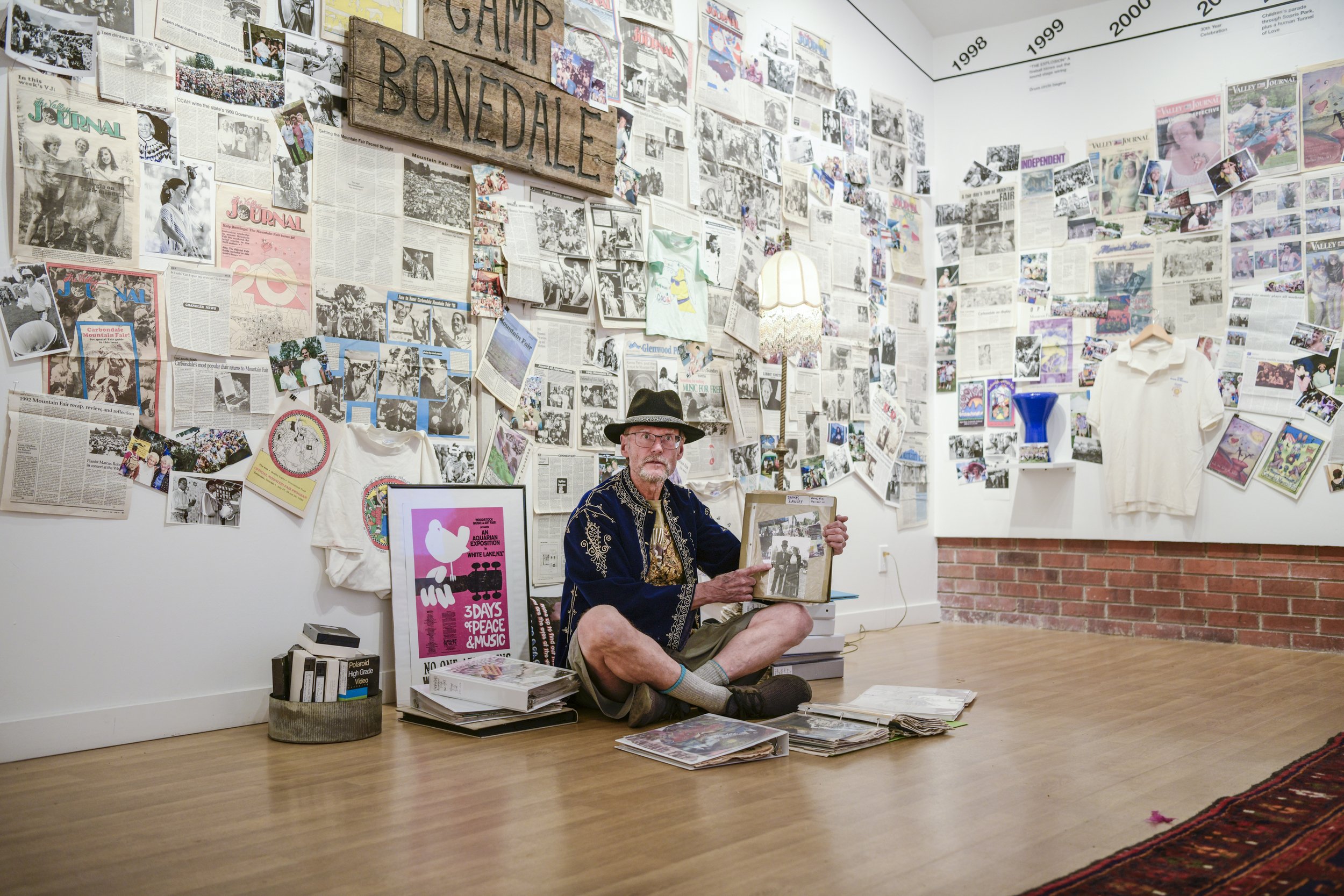 Terry Glasenapp with 50 years of Mountain Fair memorabilia, including a velvet hat gifted to him by the late Thomas Lawley. Photo by Paula Mayer.

The Carbondale Mountain Fair would not be the same without KDNK; in fact, it’s how some folks tune in for the fair each year — even before virtual attendance was in style. For the 50th anniversary, fair gurus conferred and decided to mash up some highlights from historic recordings preserved, or rescued, and brought to light.

Carbondale Art’s legendary executive director, Amy Kimberly, and KDNK DJ, former music director and keeper of the troves of local hippy history, Luke Nestler, set out to create a podcast series with hours upon hours of content. Nestler was quick to give credit, “It was Amy’s idea all the way.”

However, Nestler has been diligently working away in the KDNK editing room to make coherent compositions from some, without a doubt, less-than-coherent moments. Nestler estimates he spent around 250 hours up to the time of this news story working on the project… and he’s still plugging away.

“For my 15 years at KDNK, I spent every Mountain Fair basically in the KDNK studio,” said Nestler, supervising the recording of the fair. “Amy knew that I knew those recordings intimately.”

Back in January 2021, Kimberly and Nestler began interviewing several longtime Carbondalians like Wick Moses, who has been referred to as “The Godfather of KDNK” and was around for the inception of the Mountain Fair tradition.

In 2006, Nestler, “got serious” about recording the event. However, the fair was being broadcast before his time. Back then, Moses was in charge of delivering the fair live on KDNK’s airwaves. Nestler asked Moses when they started broadcasting the fair. Although Moses couldn’t say exactly when, he estimated maybe in the early ‘90s. “We’ve been broadcasting for a long time, we just don’t know when it actually started,” explained Nestler, laughing.

KDNK and Carbondale Arts are not the only players in this commemorative recipe. The Carbondale Historical Society will receive a hard drive with all of the audio, the podcast episodes and Terry Glasenapp’s collection of video of the fair (which is currently on display at The Launchpad) for preservation.

“That’s what it is, man,” exclaimed Nestler. “This is history, this is history that we’re doing. It’s not a top-down history of presidents, senators, mayors and town trustees… it’s the peoples’ history and it’s something that all of us created together and that’s really cool.”

Because airtime is limited on KDNK, the podcasts will go more in-depth with the interviews and recorded history. The podcast link will be available in August or September on the Carbondale Arts website. There will likely be 10 episodes when all is said and done, each with its own theme.

For the final episode, Nestler plans to collect stories from attendees at this year’s fair. So, if you have a story to share and see Nestler in the mist at the front of the stage, reach up and tap him on the shoulder and he’ll lend an ear.

“There’s something that we’ve come to call the golden moment,” Nestler said, “and that’s that feeling that everyone gets when they’re at Mountain Fair and everything is perfect.” It’s different for everyone, but according to Nestler it’s what they’re all searching for every year.

Live KDNK coverage this year will begin at 4 p.m. on the Friday of Mountain Fair. KDNK Music Director Cody Lee will take on Nestler’s role in the studio.

“In the broader landscape of what’s going on in the country, politically and socially,” Nestler began, “I think that the Carbondale Mountain Fair is a really shining example of what’s possible between people.”