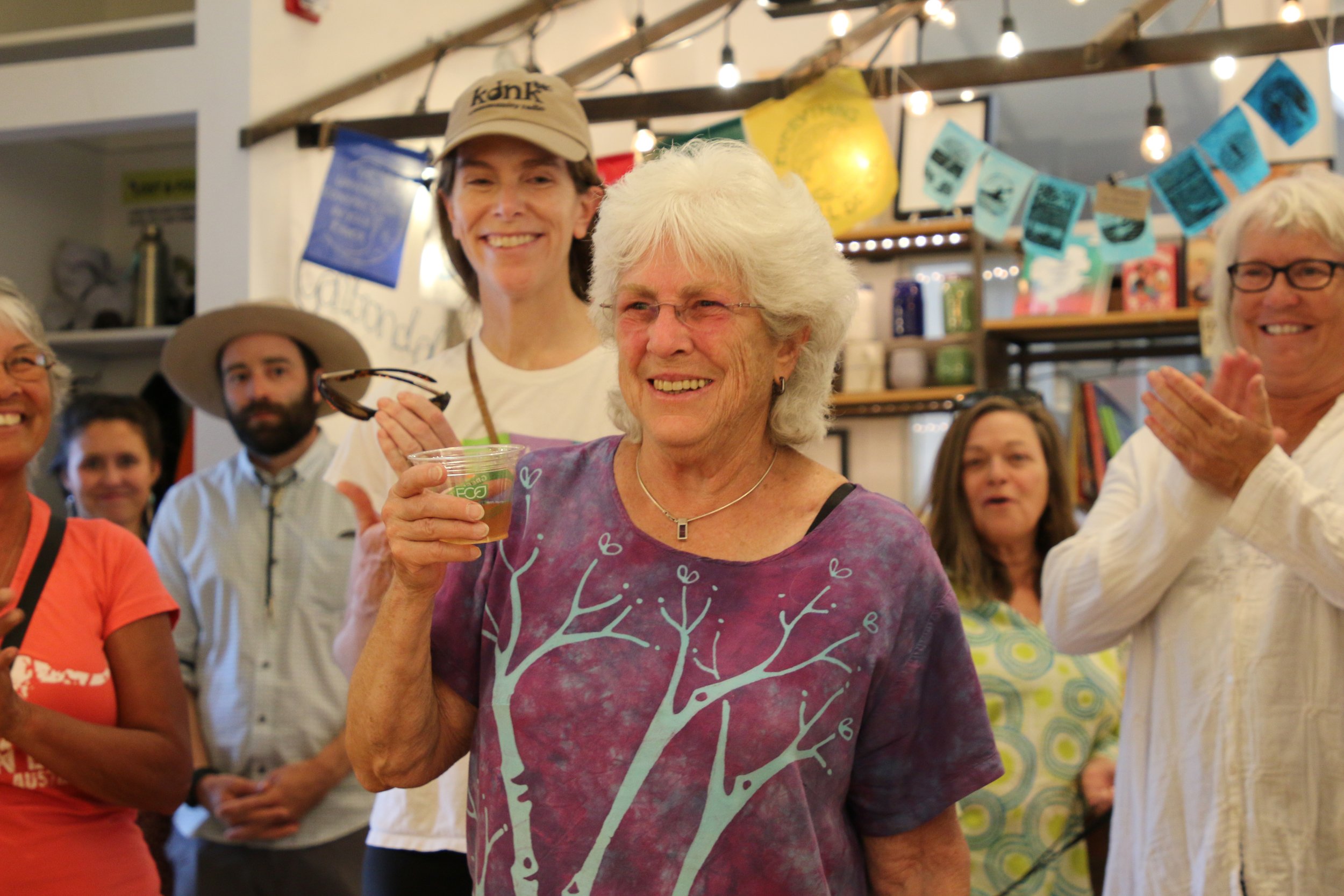 Laurie Loeb has played an integral part in the history of Mountain Fair since the very beginning. She is known to many as "Mother of the Fair." Photo by James Steindler.

Amy Kimberly, Carbondale Arts (CA) executive director and Mountain Fair director, shared that the first-ever gallery exhibition of the history of Mountain Fair, currently on display in The Launchpad’s R2 Gallery, “has been years in the planning.”

Kimberly explained many of the items in the exhibition have been “in bins for years.” She added, “We have been carting around boxes and boxes of Carbondale Arts history for as long as there’s been a Carbondale Arts, so 50 years of stuff.” The goal has been to organize and curate it in some way, “so the 50th anniversary seemed like we could have no more excuses; it was time it had to happen.”

A couple of years ago, Kimberly hired fair enthusiast Terry Glasenapp to organize and catalog the collection “that had floated around in various states, as different directors came in,” she said.

Glasenapp, who has photographs, films and newspaper articles he’s collected since he moved here in the mid-1980s, combined and organized the collections. He also used video clips to compile a 90-minute film on view in the gallery’s “living room,” along with several photo albums of newspaper articles and other ephemera.

Kimberly noted how significantly technology has changed during the last 50 years, as evidenced by a table with a VCR player and a bin of VHS video tapes nearby. She said, “It’s gone from cassette tapes to VHS to CDs to now when it’s all digital.”

It’s all there on the gallery walls — beginning with the fair’s origin story and Laurie Loeb, director from 1972 to 1978, drum circle leader and the decreed “Mother of the Fair.” In 2020, abbreviated but joy-filled with a flatbed stage roving around town, Mountain Fair was stylishly pulled off under Kimberly’s leadership.

Loeb said of the exhibition, “To amass this much testimony and artifacts from the fairs is amazing. They did a beautiful job, and to have these archives — it’s really precious.”

Last fall, Bonnie Williams and Kim Magee, volunteers from the Carbondale Historical Society (CHS), compiled the timeline from 49 years’ worth of fair programs. Williams explained, “We gleaned information about the structure of the Mountain Fair committee, the Carbondale Council on Arts and Humanities [precursor to Carbondale Arts] and chairpersons,” Williams explained. Other CHS volunteers that helped organize the data were Marge Palmer and Jessica Markham.

Over the weekend of this year’s fair, Williams said CHS will share a booth with KDNK Community Radio inviting fairgoers to stop by and share their Mountain Fair memories.

One gallery wall is devoted to Mountain Fair competitions and contests, with photographs of wood-splitting, cake and pie contests, and the official limbo stick on display. There’s also a display of Dr. Limbo’s Elixir bottles, originally filled with water.

Glasenapp intimately knew Thomas Lawley, fair director from 1987 to 2002. He said, “Various facilitators and people like that, over the years, have taken a couple of steps back in order to let more people come in.”

Laura Stover, who designed the display, had help from her boyfriend’s mother, Karen Barbee, to sort through newspapers. Suddenly, she said, “Karen squeals, out of nowhere, ‘That’s my mom!'”

Stover said that as she and Brian Colley were working on the installation, people would come into the gallery, and “there would be a tear here, or people would be extremely happy. I don’t think that we’ve been able to do that with any other show. I think the fair, in general, does that for people every year. But to see people have that experience when they walk in a room — it’s pretty cool.”

She and Colley worked until the wee hours of the morning to complete the installation when they came up with the “to infinity and beyond” tagline, speculating on Mountain Fair’s continued longevity.

Kimberly said that a website will be built specifically for Mountain Fair’s history, “so then it will always have a home, virtually.”

Nestler summarized the importance of the exhibition, saying, “There’s a lot of history here, and the nice thing about it is it’s people’s history — it’s from the ground up, and I love that. And it’s us; it’s just all of us.”

The R2 Gallery exhibition is open during special hours on Mountain Fair weekend and runs through July 29. A virtual tour is available at carbondalearts.com