Workers needed near and far 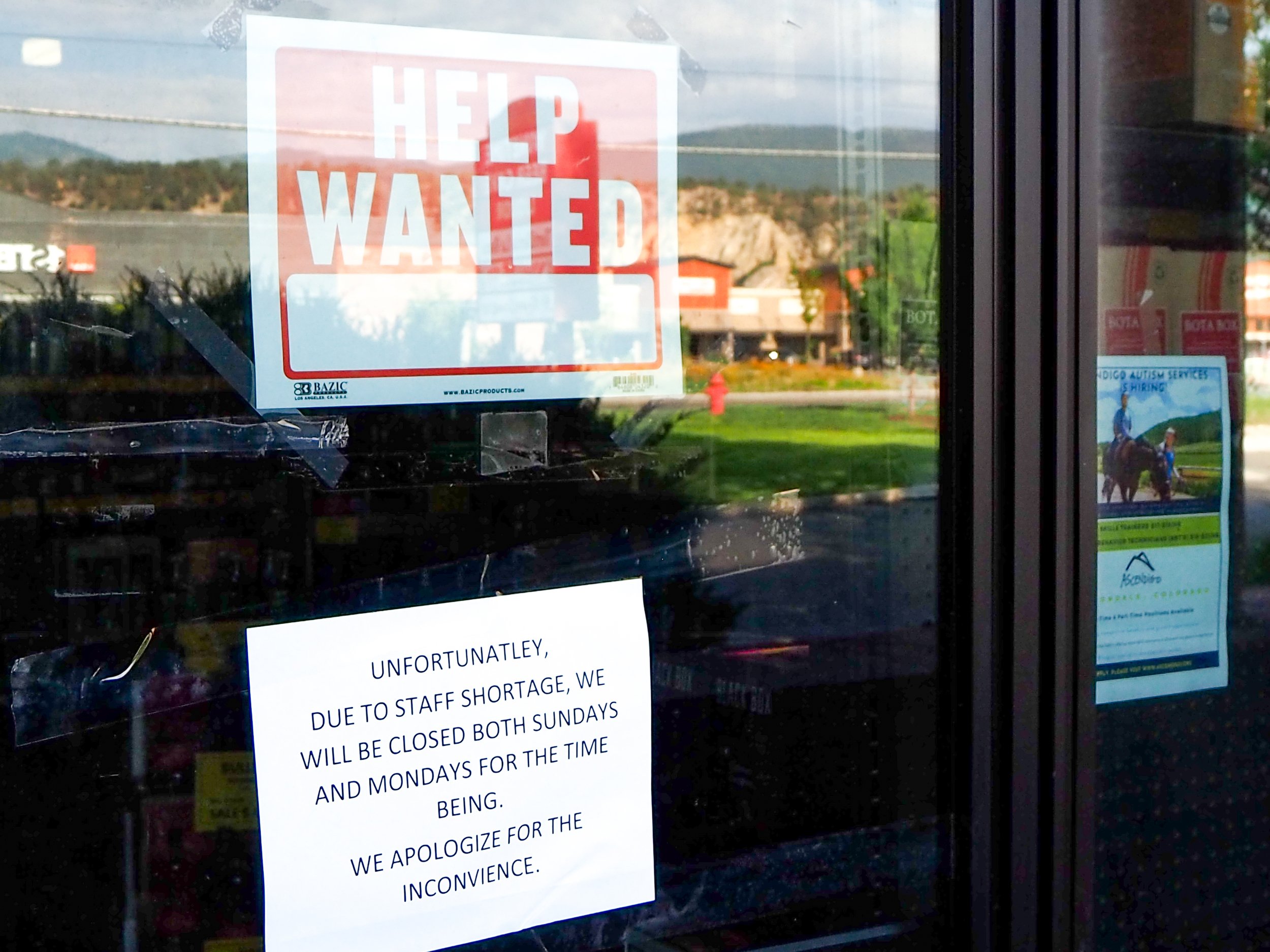 WineTime is among other businesses in Carbondale with reduced hours due to a shortage of labor. Photo by Raleigh Burleigh.

It’s no secret, there is a deficiency in the labor pool. It is a nation-wide trend and the Roaring Fork Valley is no exception. Walking down Main Street in Carbondale, it’s hard not to notice the “help wanted” signs taped to the windows of popular restaurants.

Some businesses, such as the newly-opened Ming’s restaurant next to City Market, have reduced their hours to take care of the staff they’re holding onto. A sign is posted at the entry letting customers know the restaurant will be closed on Tuesdays, “due to a shortage of staff.”

Jared Ettelson of The Village Smithy has had a hard time filling two cook positions. “It’s been hard filling the cook positions because business is booming everywhere, every industry,” he explains, “so they [job seekers] can pick and choose where they want to work.” He continues, “At the end of the day, we are just so busy it is creating a new norm for staffing levels that we haven’t seen before.”

Tony Gagliardi is the Colorado State Director of the National Federation of Independent Business (NFIB). NFIB has about 300,000 member businesses from all over the country.

NFIB conducts random surveys each month. Recently, a study showed “46 percent of our owners are reporting job openings that they aren’t able to fill.” Gagliardi explains, “39 percent have reported raising compensation and another 26 percent plan on raising compensation in the next three months in order to get employees back into the workplace.”

According to Gagliardi, Colorado exhausted its unemployment trust fund in the spring and he believes business owners are going to “be sticker shocked when they see what the unemployment tax rate has gone up to.”

“The paycheck protection was an extreme benefit,” says Gagliardi, “but we’re at a time that we need employees.”

Andrea Stewart with the Carbondale Chamber echoes Gagliardi’s concerns. She says, locally there are more openings than there are folks looking to gain employment.

She adds that the influx of tourism has kept businesses swamped and can require hiring more staff than they had even before the pandemic. Others have opted to reduce operating hours. While business is good, burnout is high.

Stewart points out that most of the signs seen on Main Street are in food service, “but there are so many jobs,” she says. “For Carbondale Chamber members, we offer a free job posting board,” she adds. One can go to carbondale.com and there is a link at the bottom of the page. Job seekers often use the online bulletin board tool to track down work.

Greg Fulton, President of the Colorado Motor Carriers Association (CMCA), says there’s been a driver and mechanic shortage since before the pandemic, “but the pandemic tended to exacerbate the problem.”

He explains that the average age of a truck driver is 55, and “when the pandemic came on we saw a number of the older drivers retire because they were in an at-risk group.” The virus further complicated training of drivers because the trainer and trainee need to spend long amounts of time driving together. “It made it much more difficult.” says Fulton.

Drivers can only drive for 11 hours per day and most trucks are equipped with devices tracking their number of mobile hours. “You can face pretty significant penalties if you exceed your hours,” explains Fulton.

On top of that, frequent road closures have often forced drivers to take alternate routes.

“[One] issue we end up having on the West Slope relates to food distribution,” he explains, “because when you look at City Market/King Soopers, all of that distribution comes from Denver.”

Most of the fuel coming to the Western Slope is from the Front Range, Fulton explains. Fuel truck drivers have to take Loveland Pass rather than driving on I-70 because hazardous materials are not permitted through the Eisenhower Tunnel.

Fulton argues that people are getting more fuel than they normally would. “When you have a bag over a pump or see the news stories, it creates a sense of shortage,” he explains, “and it’s kind of like the toilet paper [early in the pandemic]: everyone goes out, they take every vehicle they have and fill it up.”

He claims that tourist travel has increased significantly this summer, especially over the Fourth of July weekend, adding to the demand.

These issues contribute to the gas hikes people have been seeing. “If it’s costing the transporter more time to get to sites, time is money and so we’re incurring additional costs and those costs have to be absorbed somewhere,” he explains.

However, Fulton adds, fuel supply nationally is a major part of the issue, “Everything sort of ramped down because of the pandemic and then you get this extraordinary amount of demand really fast.”

Fulton hopes to see more people apply as truckers and jokes, “We always say, ‘see the country and bring home the bacon twenty tons at a time.’”