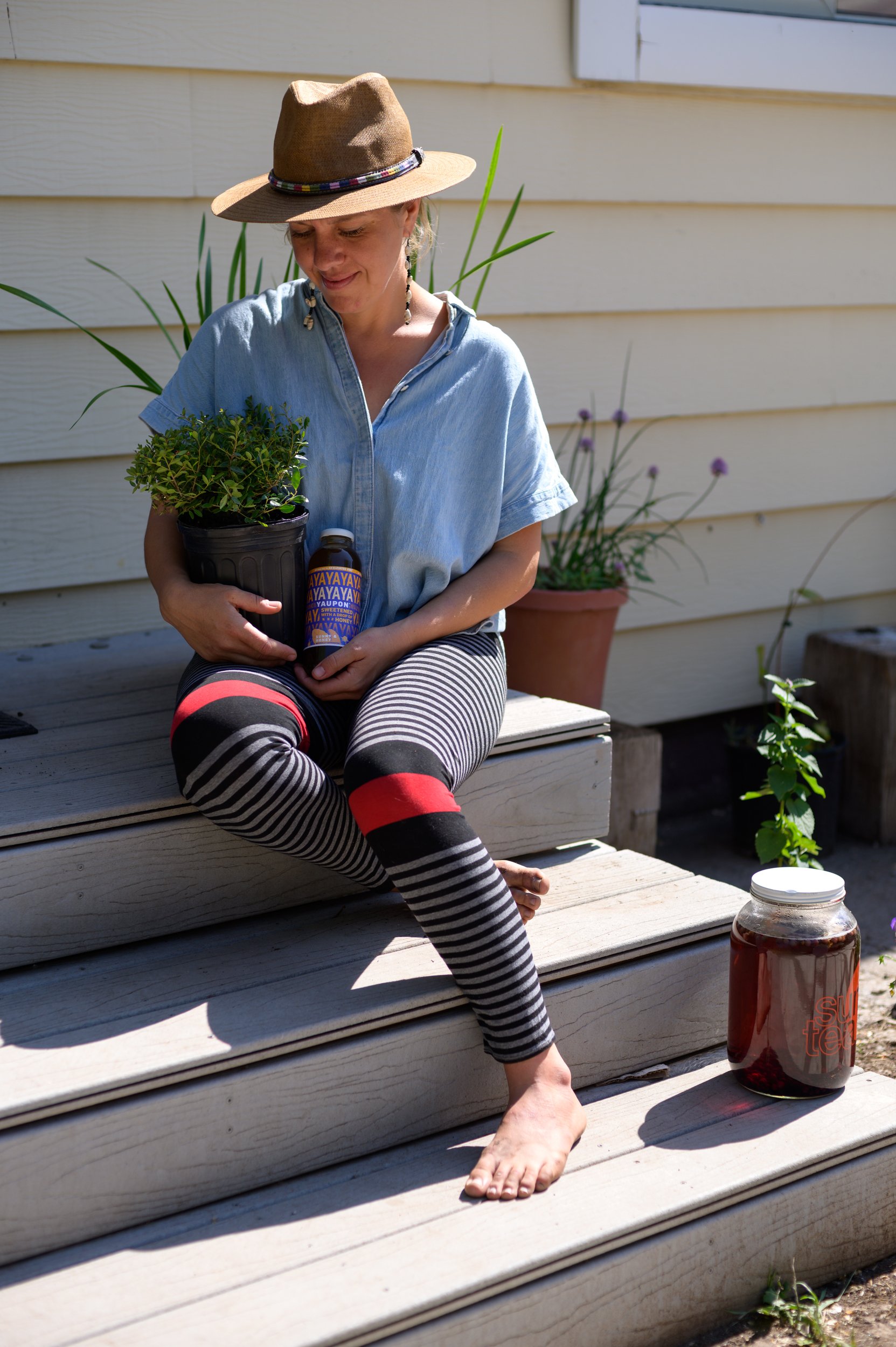 Rachael Young with her yaupon plant and beverage. Photo by Will Sardinsky.

From examining the names of streets and professional sports teams, to reconsidering what statues are displayed in public, the U.S. has arrived at a historical reckoning point. The colonial narratives of our past undoubtedly left their mark on the present and now the question is, what do we want to celebrate?

“We are starting to realize that things have these permanent names that express energies and ideas related to parts of history that we don’t want to honor,” said Rachael Young, a Carbondale resident.

Young is looking at history through her own lens; that of an ethnobotanist turned entrepreneur on a mission to decolonize the name of a little-known plant, Ilex vomitoria – commonly called yaupon.

“The problem with the current name is that the Latin binomial is supposed to be informative, or clue people in to a property of the plant, but Ilex vomitoria does not have any emetic properties,” Young explained.

Daniel Solander, a “nerd at the British Museum and one of Carl Linneas’ top guys,” according to Young, allegedly named the plant after Native Americans were observed drinking a mixture with Ilex vomitoria as part of a ceremony that involved vomiting. However, it was not the only plant involved in the ceremony, and nowadays we know that Ilex vomitoria does not cause vomiting.

Young’s journey with yaupon began during her time in Austin, Texas, while foraging for local plants. A friend mentioned that yaupon is a native plant and “a cousin of yerba mate and has some caffeine or something,” Young recounted.

After harvesting it, she began experimenting with brewing it as a tea and fell in love with the flavor and the way it made her feel.

“I started to get to know the plant and build a relationship. I realized it was one of the most benevolent plants that I had worked with medicinally… It is more gentle than coffee or other caffeine plants; it gives you energy, but without jitters. And it’s also nootropic, which means it enhances cognition. Indigenous peoples called it the drink of social wellness.”

Her deep love for the plant led Young to start a beverage company, YAYAYA Yaupon. As Young’s relationship with the plant grew stronger, she dug further into how it had seemingly been forgotten, despite being one of two of North America’s only native caffeine plants (both closely related). She learned that, “with the indigenous People of the United States having been displaced and killed by the U.S. government, the knowledge of the plant died out. Even indigenous ethnobotanists I have talked to told me that they have never used it before because they thought it would induce vomiting.”

Wanting to give back to the plant, Young started looking at what it would take to rename it. She brought together other yaupon companies, academics and botanists, including biologist Jack Putz, a yaupon advocate and biologist at the University of Florida. Putz, using his pool of resources, reached out to Walter Judd, a world famous authority of plant systematics.

Recounting the conversation with Judd about changing the plant’s name, Putz wrote, “He was clear that we don’t stand a chance. He pointed out that the Code of Nomenclature avoids ethics… He knew of cases where one botanist stole material from another and then named a species, but that name too stands. In other words, other than for phylogenetic reasons revealed by, for example, DNA sequencing, name changes aren’t considered.”

While at this point many would give up, Young refused. “The only way to change the name of a plant whose name has harmed its relationship with the indigenous people who used to harvest it… is to change the law, and it is a law. The way to change the law is to publish in Taxon Magazine which others recommend I find a taxonomist to do, or else it won’t be taken seriously.”

Meanwhile, Young is part of a group working on sequencing the genome. “Yaupon exists naturally in Florida, Georgia, North and South Carolina, Texas, Louisiana, Mississippi, Oklahoma and Arkansas. It can be a small shrub or a much larger coastal tree and the coastal variety looks and tastes very different!” If the genome turns out to be different between varieties, that could also be grounds for renaming.

Despite all of her effort toward changing the name, Young doesn’t want a say in the new name. “I hope that the renaming would re-engage the indigenous population in the conversation around yaupon. I also hope that it would honor it as a nourishing, food-like herb.”