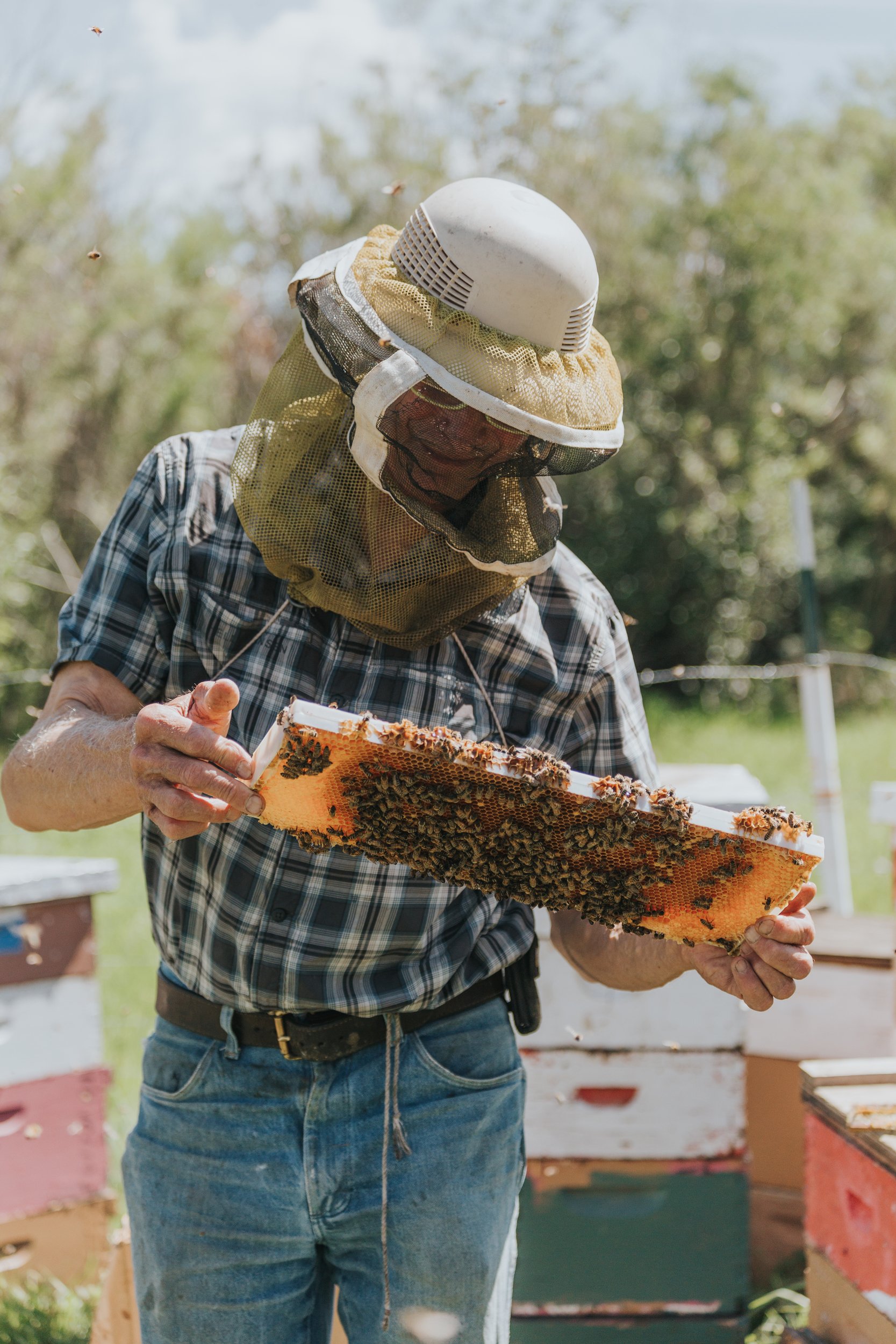 Beekeeper Ed Colby inspects a frame from a hive at the Emma Open Space. Frames provide the structure for bees to build honeycomb and store honey. Photo by Olivia Emmer.

After 28 years of beekeeping, Ed Colby’s movements around his hives are steady and calm. Instead of a full beekeeping suit, he’s wearing blue jeans, a short-sleeved shirt and a bee veil to protect his face. The steady hum of bees fills the air as he prys open a hive.

I’ve met Colby at the Emma Open Space. Past the Two Roots farm stand and over a ditch is a quiet irrigated pasture dotted with purple blooms of alfalfa. In June, at the request of Pitkin County Open Space and Trails (PCOST), Colby moved approximately 10 hives to this location, as a trial for the open space program.

Paul Holsinger, agriculture and conservation easement administrator for PCOST, explained that the pilot program is an effort to take action on their stated goals of supporting pollinators on open space parcels. If the collaboration goes well, there’s interest in finding other locations to host bee colonies and to take other actions to support pollinator species. As an added incentive, cultivating plants that support pollinators could qualify some open space lessees for conservation funding through the Natural Resource Conservation Service, a part of the United States Department of Agriculture.

Every couple of weeks Colby checks on these relocated hives. “There are many problems facing honey bees, but the biggest one – the most immediate one – and the one that beekeepers can actually do something about, is controlling Varroa mites,” said Colby. “If you could imagine a critter as big as a dinner plate who lived on your back or your stomach and chewed on you, and transmitted diseases through those wounds, you can have an idea of the problems that bees have.” Varroa mites are originally from Asia but have now spread throughout much of the world, causing problems for honey bee species that are not adapted to them.

Colby is a former president of the Colorado State Beekeepers Association and a staunch advocate for responsible beekeeping. With the resurgence in popularity of hobbyist-beekeeping, he worries that well-intentioned backyard apiarists could end up doing harm. He explained, “In the trade and the bee magazines, these [hives] are called Varroa bombs… Let’s say that you have a hive in your backyard and it’s overrun by Varroa mites, so the hive dies, and there’s all that honey in there. Somebody else’s bees are going to raid that hive and they’re gonna bring the mites back to their hive.” Honey bees are opportunistic and will collect honey from inactive hives.

To assess the health of a colony, Colby opens the hive, pulls out a frame and, after ensuring the queen isn’t in the frame, shakes some of the bees into a mason jar. The jar is marked to show the “300 bee level.” Colby then scoops about a tablespoon of powdered sugar into the jar and covers the mouth with a mesh lid. Gently agitating the jar distributes the sugar over the bees and dislodges any mites living on the bees. Then, he shakes the sugar out of the jar and into a tub. Finally, he pours water into the tub and looks for mites floating on the surface. This time, he finds three mites. Three mites for 300 bees might not sound like much, but, if left unchecked, the mite population will double every month. For every one mite living on a bee, there are two more inside the hive that haven’t hatched yet. An infestation can quickly get out of hand if the beekeeper isn’t paying attention. In this case, Colby puts an organic mite treatment into the hive to keep things under control.

There are several threats to honey bee health besides the mites, such as pesticides and loss of forage quantity and diversity. Drought can also be a stressor, as it can reduce the amount of nectar that plants produce and that bees collect to make honey. Heat is also a stressor. Bees will spend a lot of time fanning the hive to try and cool it down, instead of foraging.

Again, Colby. “This valley, when I moved here fifty years ago was all forage. Now it’s all houses. So the bees are not only getting not enough to eat, but they’re not getting the variety that they used to. So there used to be alfalfa, and weeds, and sweet clover and now it’s all been taken over.”

Colby encourages people to improve bee forage. “Plant flowers, and whatever you do, don’t mow those dandelions or– even worse – poison them, because that’s [the bees’] real kick-start for the year. Dandelions come up early and they’re so nutritious, not only in pollen, but in nectar.”

For more information about using your yard to support pollinators, visit coloradobeekeepers.org/help-the-honeybee/plant-forage/