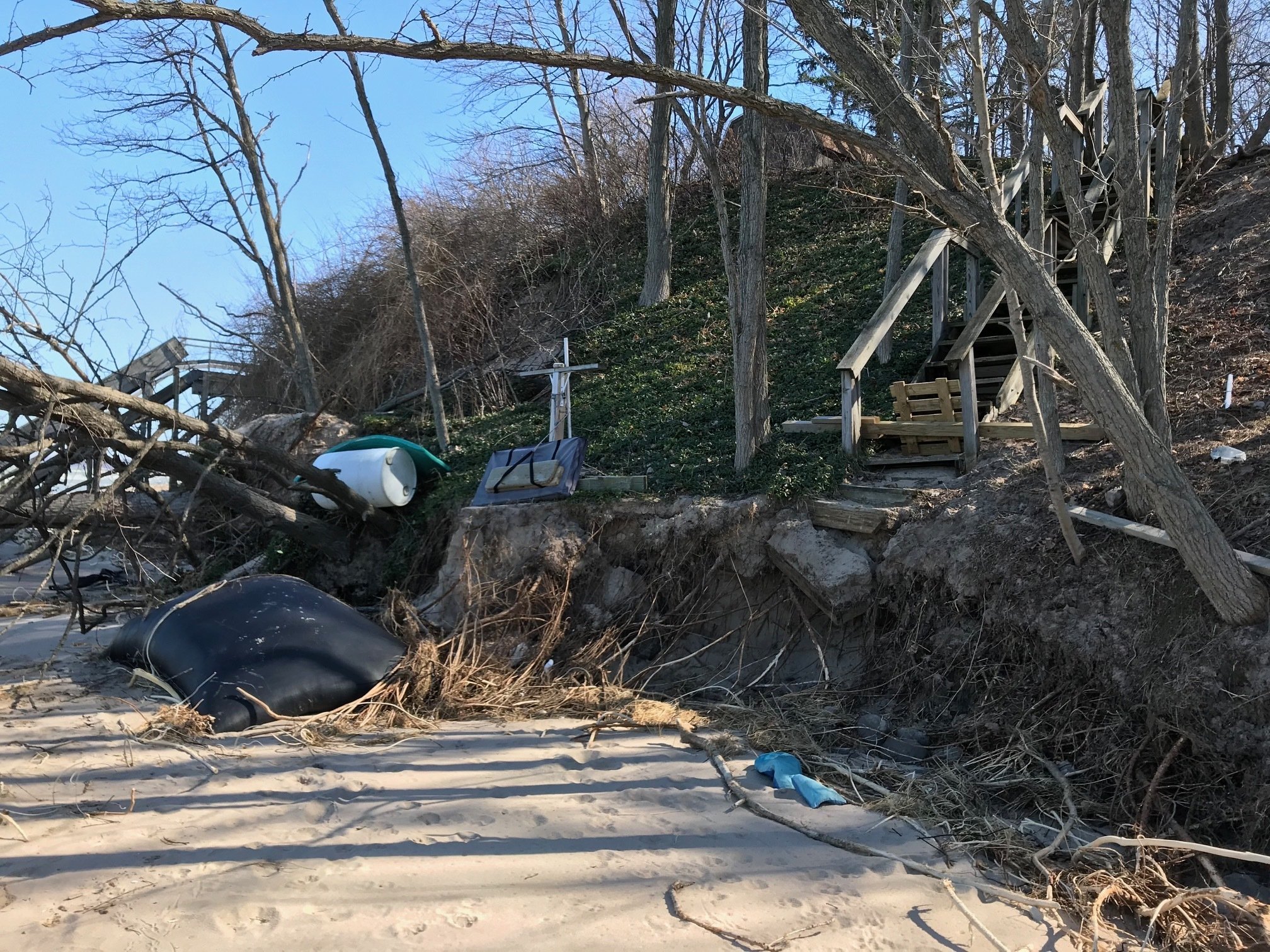 Extent of shoreline destruction along Lake Michigan in Harbert, Michigan; March 2020. Although the stairs down to the end of the railings survived, everything else up to that point was destroyed, including the stairs in the left background. Photo by Beth Dahl.

Greetings, Bonedalers and valley folk, from (near) the shore of Lake Michigan! For almost two months (with a week-long break for Mountain Fair), my wife Bonnie and I have been at a little cottage in the woods about 10 miles north of the Indiana border. We have been coming here for years.

It’s in a small corner of southwest Michigan blessed by a relatively gentle climate, with generally good annual rain and snowfall, occasional violent thunderstorms in summer and some whoppers of gales and blizzards in winter. The nearby surrounding area is renowned for its produce: asparagus and strawberries early in the season, blueberries and peaches later on and – the crowning glory – sweetcorn in August. In fall, there are apples and grapes at numerous “u-pick” farms.

Great quantities of sand have formed dunes along the Lake Michigan shore, which, along with other gravelly debris, were deposited by the enormous, late-Pleistocene glacier that gouged out the lakebed and filled it. A favorite pastime is walking along the shoreline collecting interesting rocks, colorful beach glass and small bead-like fossils from crinoids, a plantlike marine animal that lived about 345 million years ago.

From the beach, we can see the curving shoreline receding to the north and south. Chicago lies 60 miles due west and, on clear days, we can even spot the tops of its tallest buildings. Otherwise, we gaze out at what looks like a vast ocean of fresh water, the curvature of the earth clearly defined on the horizon. Caps and t-shirts sold around here sport the slogans “unsalted” and “no sharks” printed on them.

The area has been a vacation destination since the early 20th century, especially for those from the Chicago area and northern Indiana. It languished for a while during the Depression, wartime years and the postwar travel boom but came roaring back in the 1970s after the Army Corps of Engineers built a yacht harbor in New Buffalo (the first town over the Indiana border). Folks are drawn by the beautiful water, endless golden-sand beaches, a burgeoning cultural scene and the growing number of shops, brew pubs and fine restaurants.

In spite of its charms, however, climate change is altering this area, just like it is everywhere else.

One of the biggest questions is what might be happening with the lake’s water levels. Those studying Lake Michigan have found that its surface level tends to fluctuate on a 13-year cycle – roughly six rising and six falling. However, in the four decades I have been coming here, there have been two periods of extraordinarily high water: once in the mid-1980s and now since 2019. In July 2020, the lake’s surface reached a record-high of 582.4 feet above sea level, a half-foot higher than the former peak in 1986 and some three-and-a-half feet above the 150-year average.

The result both times was extensive destruction of the dunes and loss of beach. Large trees along the shoreline were undermined and fell along the littoral. Flights of stairs leading down to the beach from the high dune were splintered and swept away. And many houses and other structures, once back in the dunes but now too close to the shore, fell into the lake.

There is general agreement that water levels in the Great Lakes are governed largely by precipitation in the basin and by surface evaporation. An article published in April 2020 by the Alliance for the Great Lakes noted, “The Great Lakes basin saw its wettest 60-month period in the 120 years of record keeping (ending Aug. 31, 2019).” A subsequent drier period recently led to the lake dropping by about a foot and a half from a year ago, though it has remained high.

It should be noted that record high lake levels often have been followed by considerably lower ones. Such was the case between 2000 and 2013, when a period of relatively dry weather years caused the lake’s surface to drop to near-record levels. The result (actually starting in the 1990s) was that sand that had been washed into the lake was exposed and pushed back up (by wind and wave action) to rebuild the dunes that had been destroyed – only to be pulled down yet again.

No one is certain yet what impact climate change is having on these cycles. In an article published this spring by the nonprofit Great Lakes Now (GLN), Joe Atkinson of the University of Buffalo stated, “I would say the hydrologic behavior is changing.” Later, in that same article, Christopher Warren of the Army Corps of Engineers added, “We don’t know in the long-term sense what climate change will bring. It could be higher volatility … or a lot of things.”

One thing known for sure, though, is that the temperature of all the lakes’ water is slowly rising. An EPA paper on lake ice published this year noted that, since 1900, the first freeze on Lake Superior has generally trended later and the last freeze earlier – 24 days earlier since 1905. Elsewhere in the paper it was noted, “Exposed water will absorb and retain heat, making the Earth’s surface warmer, whereas an ice- and snow-covered lake will reflect more of the sun’s energy and absorb less.”

One tangible effect here is a change in shoreline ice dams that once routinely formed from drifting floes (ice typically forms on Lake Michigan, but it never completely freezes over). These often have helped protect the dunes from winter storms, but they now form less frequently or last for shorter periods of time. That has undoubtedly exacerbated the level of shoreline destruction in recent years.

There are other ramifications of climate change as well. Another report published in February by GLN focused on a joint study between the University of Michigan and the American Society of Adaptation Professionals (ASAP), which observed that plants and animals have been migrating northward from the southern forests to northern Michigan, “Some of them at a pace of 10 miles annually.”

We have seen an increase in deer here, with an accompanying rise in disease-carrying ticks (notably Lyme disease). Bonnie, who has come here since childhood, never remembered being concerned about ticks until about a decade or so ago, when winters were no longer cold enough to control them – much like what has happened with pine beetles in the West. Mosquitoes, once just an annoying nuisance, have become disease carriers as well, in particular the West Nile and Zika viruses but, more recently (and, fortunately, rarely so far), an especially insidious malady called eastern equine encephalitis.

In spite of all that, the University of Michigan/ASAP study has also focused on the possibility that Michigan might become a “climate refuge.” In the next phase of their research, they have been examining, “Whether meteorological disruption will not only force people out of their homes [e.g., in the Southwest] but also compel them to move away, perhaps to the Great Lakes.” No (in case you wondered), we’re not planning to move back here. Still, a sunset walk on the beach or dip in the lake on a warm summer night is a wonderful way to end one’s day!