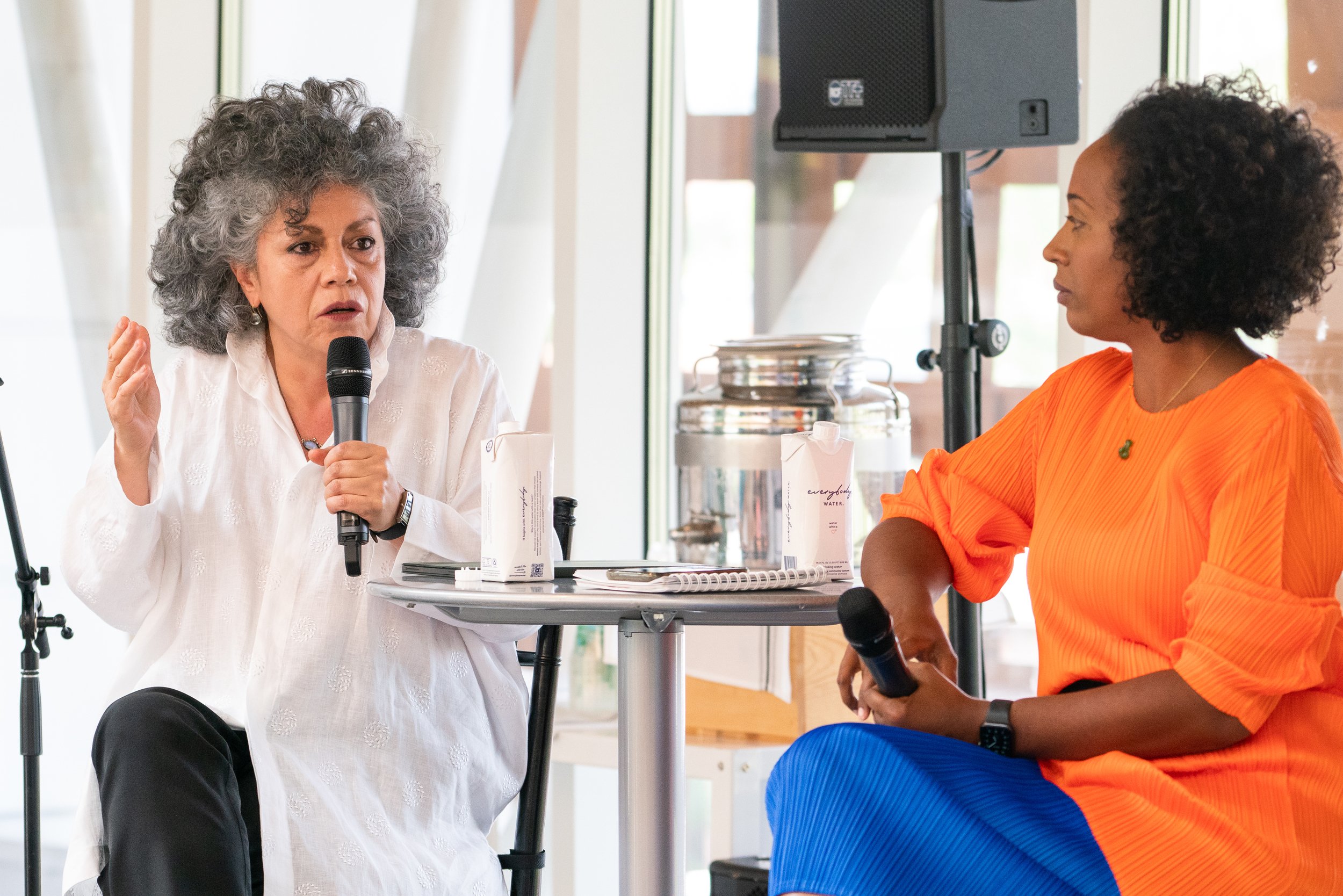 Doris Salcedo and Naima Keith discuss the significance of monuments at a recent panel hosted by the Aspen Art Museum. Courtesy photo.

The question about the appropriateness of certain monuments and statues has been simmering for decades. It finally bubbled over in the aftermath of George Floyd’s murder in Minneapolis on May 25, 2020. As civil unrest spread across the country, many statues and monuments were vandalized, destroyed or removed.

In June 2020, three statues in Colorado — depicting Kit Carson, Christopher Columbus and Civil War soldiers — were either toppled by protesters or, in the case of Carson’s statue, removed by Denver Parks and Recreation, “as a precautionary measure to keep it from being torn down,” explained a spokesperson for the city.

A panel presentation at the Aspen Art Museum on Aug. 5, titled “Entropy and the New Monuments,” was moderated by Rebecca Siegel. It included panel members Naima Keith, Doris Salcedo and Allan Schwartzman. The discussion centered on the merits and drawbacks of the ongoing national debate about statues and monuments and how  it will affect future installations.

In 1931, American historian and then-president of the American Historical Association Carl L. Becker said, “History is what the present chooses to remember about the past.” As communities grapple with the reality of their personal history, memorialized in copper, bronze and stone, the dialogue continues to swirl around attempts to find an ever-delicate balance.”

Moderator Siegel began the Aug. 5 panel stating, “We think of monuments as celebratory, yet many have taken on a different persona in the public space.”

Schwartzman, a New York-based art adviser, said, “There is very little public art that qualifies as a public monument.” He added that we are in a time when it is “very easy to demonize or politicize.”

Schwartzman cited two memorials: the Vietnam Veterans Memorial and the NAMES Project AIDS Memorial Quilt installed near the Washington Monument in October 1992. Both are located in Washington, D.C.

“Everyone’s an author,” Schwartzman said of the AIDS Quilt, and he observed that with it lying on the ground, “you cast the eyes down. It’s like you’re walking through a cemetery, but it’s alive.” He added, “It transcends aesthetics into pure experience.”

The Vietnam Veterans Memorial, which opened in 1982, honors United States armed forces members who fought in Vietnam. Etched into the long, black granite walls are the names of over 58,000 service members “who were killed in a war that was never declared a war,” Schwartzman said.

He described the granite structure as “the ultimate tombstone,” intending to be a “truly healing memorial.”

Colombian-born visual artist and sculptor Salcedo said, “A monument needs the public to become a memorial.” She agrees that protests are a valid expression because memorials “have to be contested because they are in the public space.”

Her 2018 art installation, Fragmentos (“fragments” in Spanish), which Salcedo calls an “anti-monument,” was created at the request of the Colombian government as part of a peace agreement that ended a 52-year-long civil war. The conflict left seven million people displaced, 260,000 people murdered and over 30,000 victims of sexual violence.

Fragmentos is constructed from 37 tons of weapons used by the Revolutionary Armed Forces of Colombia. Salcedo shared that, initially, a suggestion was made to her to use the guns to create an arch-like sculpture. Salcedo refused, instead inviting women who had been victims of sexual assault to participate in Fragmentos‘ creation and “allow them to overcome a systemic injustice,” she explained. The women melted the weapons down, mixing them with steel to create slabs. The women then pounded the slabs into 1,300 metal tiles that form the monument’s floor located in Bogotá.

Keith, Vice President of Education and Public Programs at the Los Angeles County Museum of Art, said of changing attitudes about public memorials, “I want the conversation to evolve. To assume the neighborhood around that sculpture is going to remain the same in 30 years is not realistic.”

She is also co-curator of the upcoming Prospect.5 New Orleans (P.5) project, titled “Yesterday we said tomorrow,” scheduled to open in October 2021, and is a collaborative project with 51 artists and installations in 15 locations around New Orleans.

The P.5 website says the project “will investigate how history forms the present – particularly in relation to New Orleans, a uniquely American city that embodies so many urgent issues of today.”

Keith said one installation would use police floodlights, which often appear in neighborhoods that police “deem to be areas of mischievous behavior.” She said the work would explore the question, “What does it mean for a neighborhood to be considered dangerous?”

Becker also referred to history as “not an objective reality, but only an imaginative reconstruction of vanished events.” Keeping that sentiment in mind, Salcedo shared that as a society, “we are reclaiming a memory that is in a permanent form of transformation.”

In other words, watch this public space.