Wildfire and mudslides and drought, oh my! 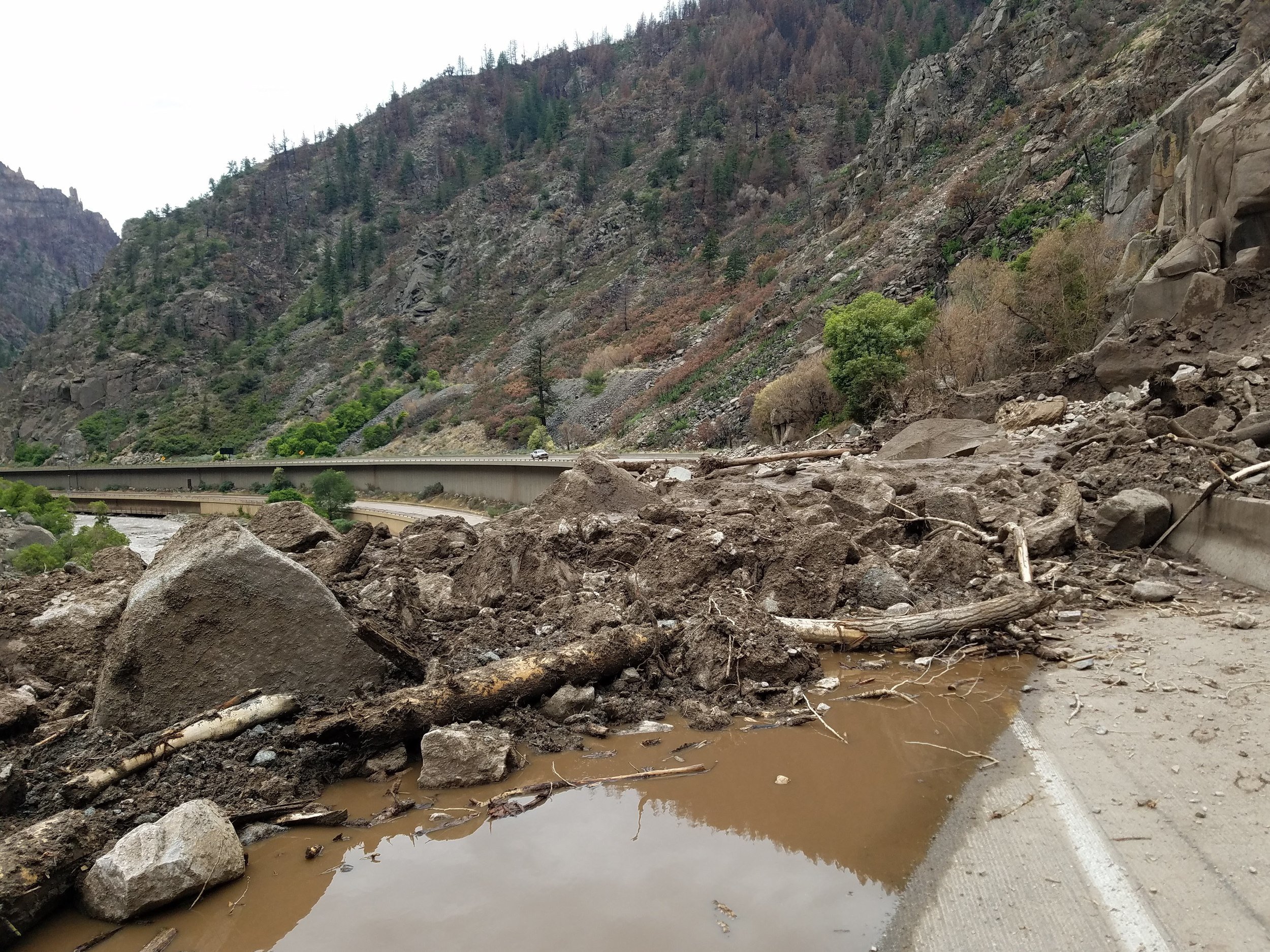 According to Jason Kean, research hydrologist with the USGS, scientists prefer the term “debris flow” over “mudslide.” Debris flow more accurately characterizes both the way the material in water moves, as well as its content. Photo courtesy of CDOT.

Intense rainfall over the last several weeks led to numerous mudslides throughout the region. The most notable events occurred in Glenwood Canyon, a direct result of last year’s Grizzly Creek wildfire, though unburned areas also experienced slides, such as Highway 133 near Redstone.

“The debris flows that we’re seeing outside the burn areas in Colorado are not that unusual,” according to Jason Kean, research hydrologist with the United States Geological Survey’s Landslide Hazards Program. “The last week of July and the first week of August has historically been debris flow season in Colorado. We’re almost guaranteed to have debris flows in the mountains during those weeks, triggered by monsoon rains.” While the recent spate of debris flows in unburned areas might feel like more than normal, Kean explained that what was actually unusual was the lack of debris flows we’ve experienced in recent years, due to widespread drought. Slopes that would often run in a typical monsoon season, didn’t.

What is outside the norm, however, is the record-setting acreage of recently burned areas. Again, Kean. “Drought is the strongest factor in this fire-debris flow sequence we’re seeing right now.” The three largest wildfires in Colorado history: Pine Gulch Fire at 217 square miles, East Troublesome Fire at 300 square miles and Cameron Peak Fire at 326 square miles all occurred in 2020.

Burned slopes are extremely susceptible to debris flows. Not only do fires destroy vegetation that would anchor soil, but severe fire can make the ground water-repellent. Rainfall “flows off more like you see in a parking lot than what you’d see in a nice forest with good ground cover,” said Kean. In the case of the Grizzly Creek burn scar, it takes just 0.3 inches of rainfall in 15 minutes to trigger a debris flow, an amount that was exceeded many times in the last month, with some local rain gauges recording more than double that threshold.

As climate change increases the likelihood and severity of drought in our region, the predicted frequency and severity of wildfire also increases. As the acreage of burned areas goes up, so too does the likelihood of debris flow events. Additionally, as Russ Schumacher, state climatologist at the Colorado Climate Center explained, “warmer air can have more water vapor in it.” More water in the air can mean more intense precipitation events. And, according to Kean, “the higher the rainfall intensity is above threshold, the larger the debris flows could be.”

According to a Colorado Department of Transportation press release from Monday, Aug. 8, during just one weekend of clearing recent flows in Glenwood Canyon, crews hauled 440 loads of debris. With each load carrying 13 tons, that’s just over 5,700 tons of debris. Now that CDOT has made progress clearing the roads, engineers can finally assess the damage to I-70. Even after the roadway is restored, the likelihood of future closures in Glenwood Canyon will remain high.

“Every year, the amount of rain it takes to kick something off in those [burn] areas will increase as vegetation grows back, but some of that vegetation that was lost, those big trees, they’re gonna take a long time to come back.” concluded Kean. “It’s not just this summer. We’re going to have to worry about this next year and maybe longer.”