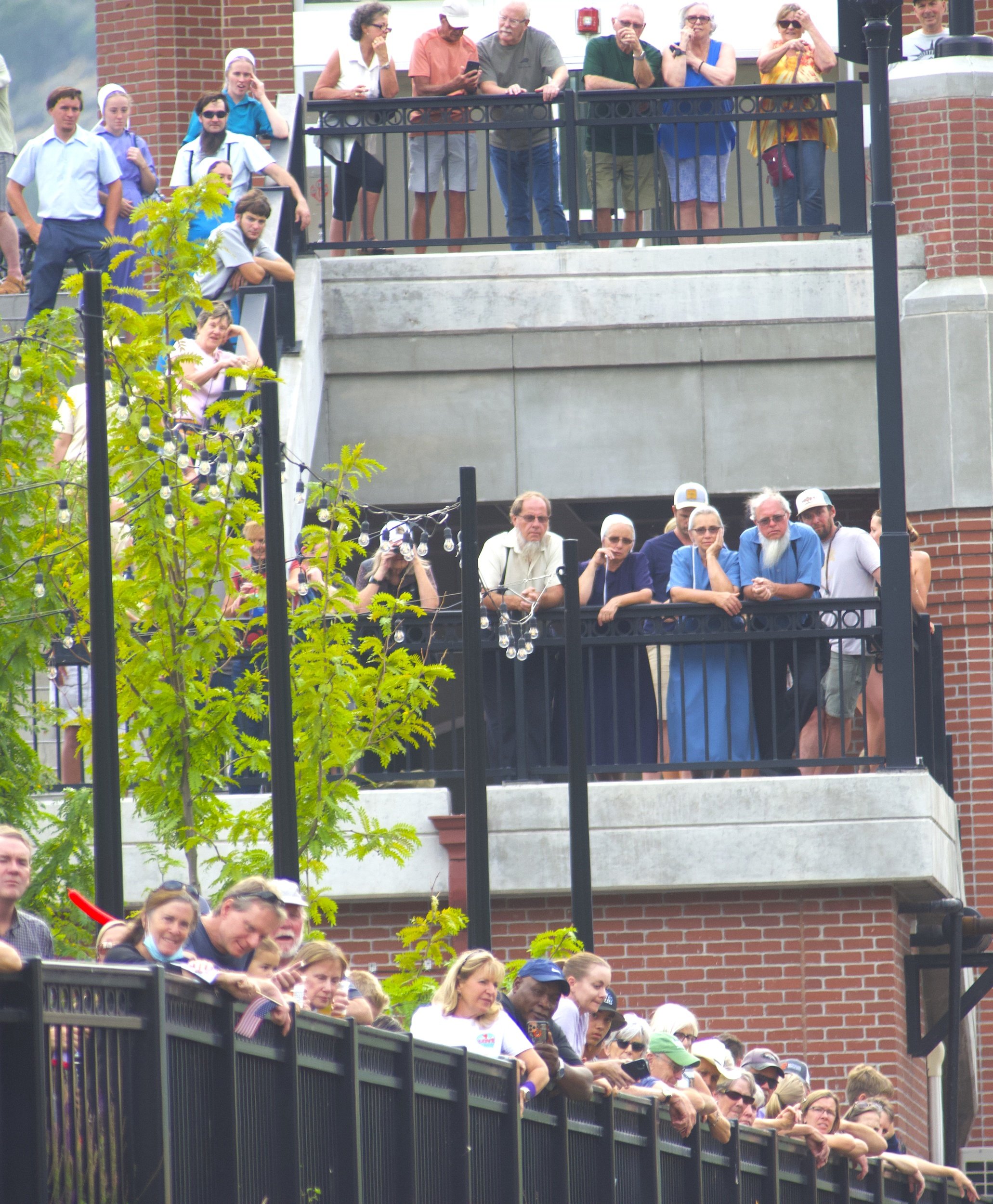 Hundreds of locals and tourists showed up to welcome the train upon its arrival. Photo by James Steindler.

The Rocky Mountaineer (RM) passenger train made its debut arrival at the Union Station in Glenwood Springs around 5:30 p.m. on Sunday, Aug. 15. Passengers were greeted by hundreds of onlookers and media outlets and the scene resembled the days of old when townspeople gathered to welcome their loved ones and celebrate the arrival of a voyage.

The Sopris Sun and KDNK teamed up to discover what all the choo choo-ing was about. Stay tuned to KDNK to hear the audio version of the story, or visit kdnk.org

The Glenwood Springs Chamber organized the train’s welcoming celebration with musical and dancing performances held beneath the bridge on Seventh Street and a speech given by Mayor Jonathan Godes.

Those aboard departed the train with big smiles and gave raving reviews of the journey. “It was very, very organized; the food was amazing; the people who served us were very funny, very kind — I was cold, they brought me a blanket,” said Mary Burk of Maryland.

“It was really neat,” added her husband, Bill. “You’re able to get out on these vestibules, so you’re not in your chair. It was really interesting when you’re going by the river and you can actually hear it.” The two laughed as they described being mooned by several rafters. “There’s a part of the river they call ‘Moon River,’ do you know why that is? Take a guess,” Bill joked.

RM has been in business for 30 years, but until now has operated solely on Canadian rail lines. The company endeavors to give their passengers a luxury train car experience with scenic views at every turn.

RM founder and CEO Peter Armstrong was on board for this particular occasion. Armstrong started the company 32 years ago when a Canadian Pacific rail line discontinued passenger travel and he was able to gather some train cars and put them on the vacant tracks.

The mudslides in the Glenwood Canyon did not deter the scheduled maiden voyage, explained RM Senior Onboard Manager Wendy McMichael, who is more commonly referred to as the train manager. “They cleared those rail lines very quickly once the rains had settled; we already knew and they had been in great communication with us on what that time frame was looking like so we had a lot of confidence that it was going to be cleared and ready for the grand opening.”

“Rockies to the Red Rocks” (not the music venue, but further west) is a two-day journey from Denver to Moab, Utah with an overnight stay in Glenwood Springs. When they arrive in Utah, passengers will depart the train at Seven Mile, at the entrance to Canyonlands. RM has 56 of these trips planned between Aug. 15 and Nov. 19.

One-way tickets from Denver to Moab (or vice versa) begin at $1,648 and include lodging for three nights — in Denver, Glenwood Springs and Moab hotels — and a hot breakfast and lunch aboard the train each day. There are also packages which include motorcoach tours from Las Vegas or Salt Lake City to Moab, where customers then catch the train east to Denver.

McMichael noted that tourist economies have been hit hard by the pandemic. “A lot of these communities have felt COVID and how it has impacted the economic aspect of these locations,” she said. “So for us to be able to come in, support and be part of that new growth, we’re super excited about.”