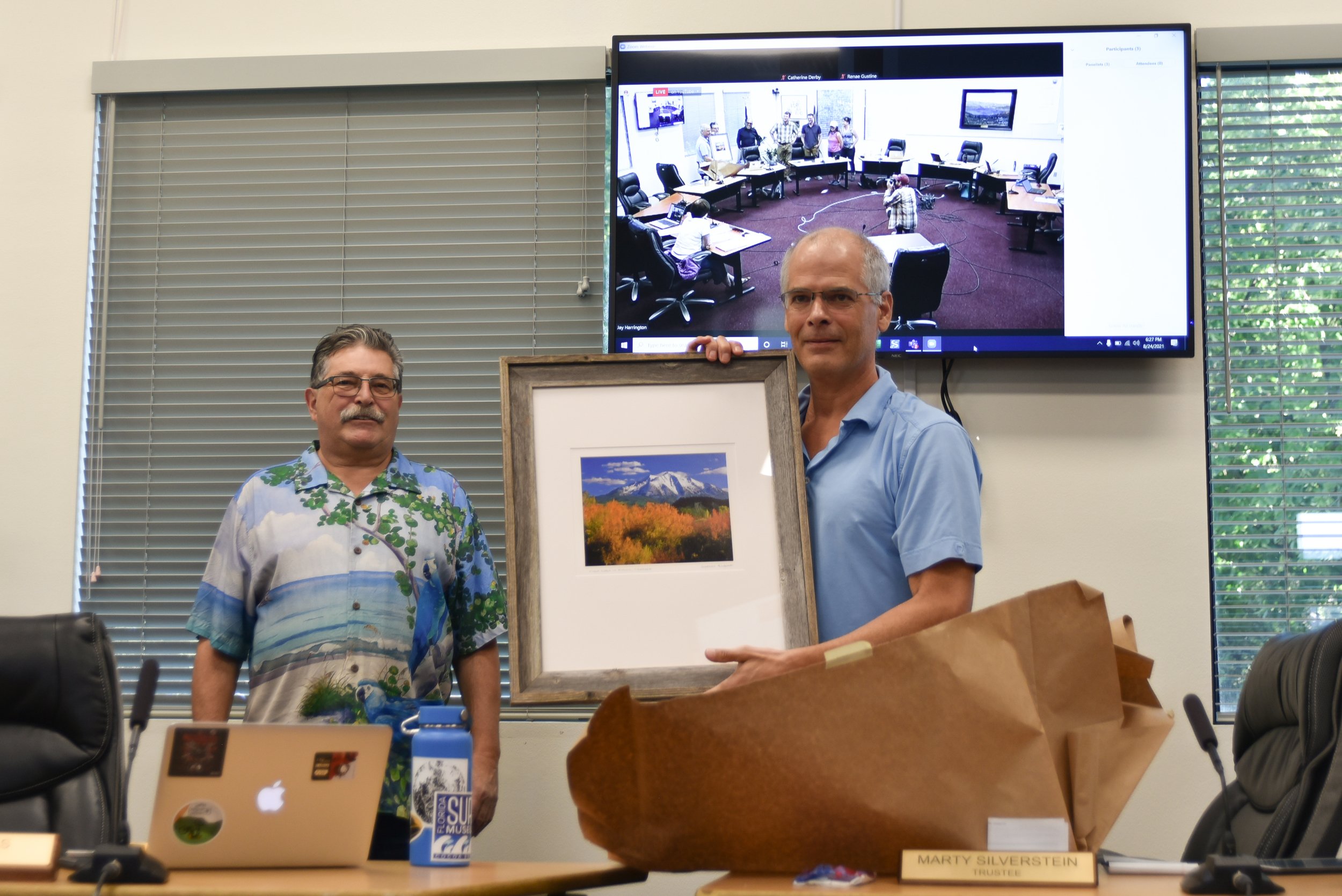 Although it was Jay Harrington’s final meeting as Carbondale’s town manager, he will continue working for the Town through Sept. 10. Photo by Raleigh Burleigh.

All the action at the latest Carbondale Board of Town Trustees meeting took place in-person at town hall. All trustees were in attendance except Heather Henry.

Ben Bohmfalk revealed during trustee updates that contrary to what trustees were told at their work session on Aug. 17, Mountain Waste — the Town’s trash hauler — had not been placing informative stickers on all cans when charging penalty fees to residents that leave a container with the lid unable to shut on collection day (or with any item outside the container). “I’m disappointed by that correction,” said Bohmfalk, clarifying that Mountain Waste is directed to place stickers when fining residents.

Next, the trustees showered Town Manager Jay Harrington with praise and gratitude, presenting him with a framed photograph of Mount Sopris.

A liquor license transfer was granted to Adriana Liechti. Her business, Craft Coffee, has a five-year lease at 689 Main Street where they support makers of local goods like juices, breads and locally-roasted coffee.

Liquor licenses were also granted to YouthZone and True Nature Healing Arts for upcoming events. YouthZone will host a watch party for films produced by local teenagers at The Orchard on Oct. 1. True Nature is celebrating its transition from a for-profit business to a nonprofit foundation with an autumn equinox soiree in the Peace Garden on Sept. 22.

Next, trustees reviewed a proposal by Harrington to spend federal COVID relief funds on cyber security upgrades, including the expansion of fiber Internet. The upgrade is estimated at around $500,000. So far, the Town has received $866,905 from the American Rescue Plan Act and is anticipating additional funds in 2022 and 2023. Trusting that this is the highest and best use allowed by the restricted funds, the suggestion was approved with the addition of a competitive bid process for fiber installation.

Also on the topic of resiliency, Third Street Center Director Colin Laird came before the board to ask for support in pursuit of a grant from the Colorado Department of Local Affairs (DOLA) to add solar energy storage capacity at the Third Street Center. Laird revealed that the building’s solar array produces on average between 10% and 20% more energy than the building needs. Storing that excess energy would help propel the “net-zero district” proposed by CLEER, which also includes the library, Bridges High School and school district housing.

Next, trustees met with Cushing Terrell (CT), the firm contracted to lead the town’s Comprehensive Plan update process. The first half of this process focused extensively on gathering input, beginning with a kick-off event on July 2. The online survey received over 550 responses in about a month. Following two open house meetings (in English and in Spanish) and two design charrettes already conducted, there will be two virtual public hearings (in Spanish on Oct. 19 and in English on Oct. 21) and a final adoption hearing around the new year.

CT presented the growth projection of 1,200 new residents by 2030 (Carbondale’s population is currently estimated at 6,972). Based on the historical ratio of 2.65 residents per housing unit, this places the need at approximately 450 new housing units over ten years. Already, 199 units are underway or recently online and an additional 105 units are proposed and under review.

This means that two-thirds of the projected need will likely be met within the next few years. Additionally, CT estimates that up to 340 units could go in Downtown North (at 24 units per acre) and there are other vacant plots downtown that could accommodate additional growth.

CT also suggested that the Historic Commercial Core zoning could be amended to specify “three stories” instead of a 35-foot height limit to attract developers with more lenient, form-based design standards.

Finally, trustees moved to approve Public Works Director Kevin Schorzman as interim town manager. With the recruitment process already underway, the goal is to have Carbondale’s next town manager hired by December.

All Town meetings are available for review on Carbondale’s YouTube channel.

Planning and Zoning will meet virtually to discuss a suggestion to initiate a zone text amendment to the Unified Development Code on Thursday, Aug. 26. The request relates to developer aspirations to build housing and/or a hotel on what is now the River Valley Ranch driving range. To comment, email jleybourne@carbondaleco.net by 4 p.m. on Aug. 26.