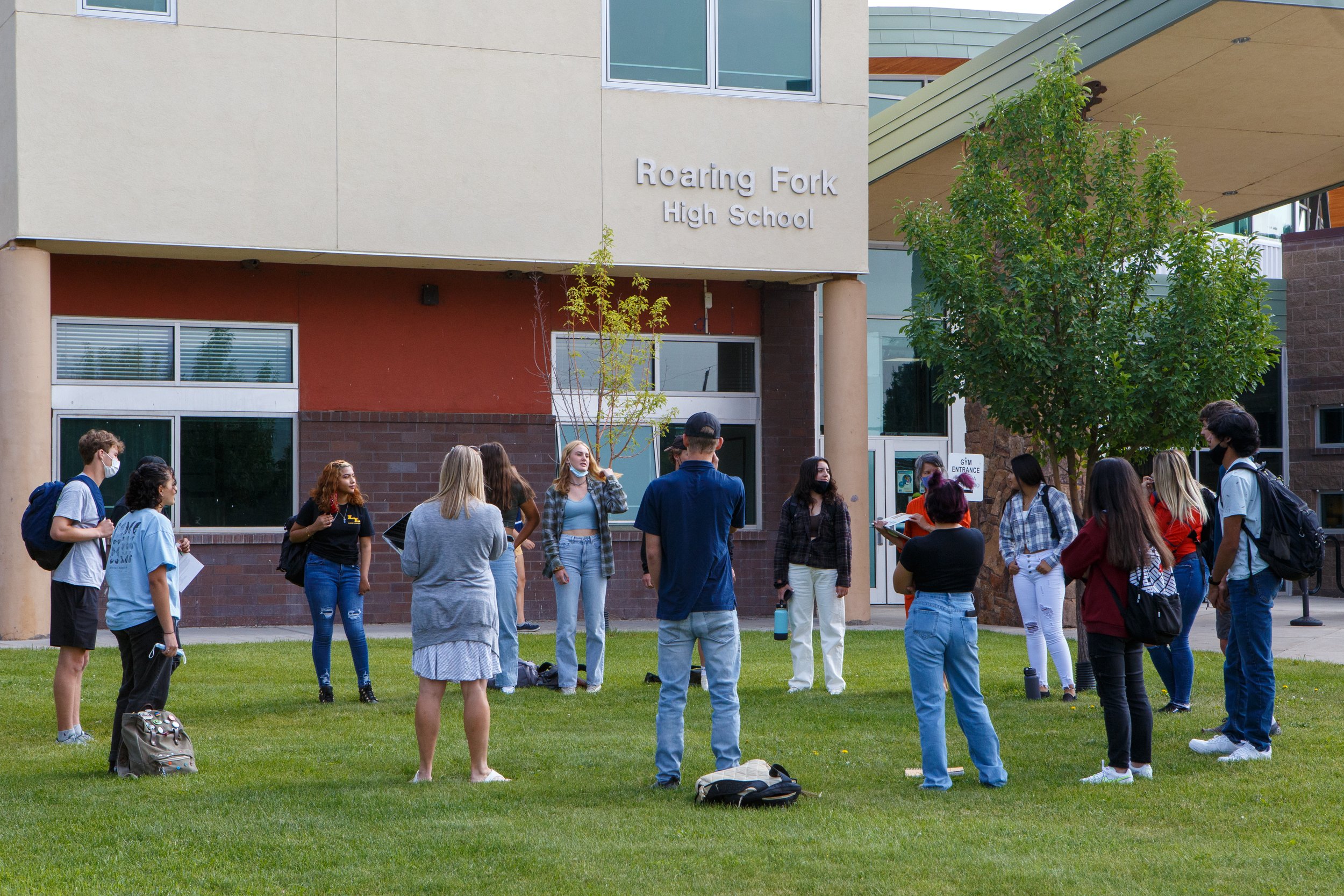 CMS Principal Jennifer Lamont explained the difficulties she encountered with hiring this summer, saying, "I got shot down a lot for the cost of living in this area." Photo by Sue Rollyson.

During a special meeting on Aug. 25, the Roaring Fork School District (RFSD) Board of Education unanimously approved a mill levy override (MLO) proposal. RFSD voters will decide, on the Nov. 2 ballot, whether or not to approve a property tax increase that will provide additional funding for teacher and staff member salaries.

An MLO exploration committee presented their recommendation to the board to approve the mill levy override proposal. They also recommended that “75% of the dollars go directly to recurring staff salary increases, 12% go to the non-recurring staff and student retention and recruitment efforts and 13% will need to be set aside as the state-mandated charter school share.”

Angie Davlyn, RFSD chief of human resources, said that while the district has experienced staffing shortages in recent years, this is “a staffing crisis like I haven’t seen before, and this is my sixth year here.”

Adequate staffing had been a problem going into the 2020-21 school year when the district faced a slightly higher than the usual number of teacher resignations. Some of the current job openings have been posted for 12 to 15 months.

RFSD is not unique when it comes to staffing issues. The results of an August staffing survey conducted by the Colorado School Finance Project, a nonprofit that compiles data on topics related to school finance, showed that of the 104 of the state’s 178 public school districts that responded, most unfilled positions were for teachers and paraprofessionals. Forty-two of the responding districts had at least one unfilled position for school counselors or social workers, with a minimum of 67 positions unfilled across the state.

The recruitment and retention situation has been exacerbated, in part, because of tough competition from neighboring school districts that can offer higher salaries.

The Colorado State Legislature caps how much individual school districts can increase mill levies. Accounting for a previously approved $8.8 million mill levy override, which passed in 2011, it is currently estimated, by the Colorado Department of Education, that an additional $7.7 million is available under RFSD’s cap. The MLO exploration committee recommended that “under no circumstances will the amount assessed be allowed to exceed the $7.7 million maximum reflected in the ballot language.”

Carbondale Middle School Principal Jennifer Lamont has been with RFSD for 23 years. She said the school is down one teacher and two paraprofessionals. She is also an MLO exploration committee member.

Before they even get here, keeping new staff prospects is a challenge Lamont knows all too well. She shared, “I had one position that turned over four times, and finally, the fifth person stuck with it. But it turned over four times — people accepted the position and then six weeks later called and said they found something else in a community where they can afford to live. Some people, after accepting it, said three days later, ‘We’d never be able to afford to raise a family there.'”

Salaries are also an issue for support staff. As Lamont emphasized, “You have to have support staff to run schools.” She added, “A lot of our support staff is paid less than City Market [employees] and a lot of other employers in the valley.”

And Lamont knows the affordable housing problem in the valley is nothing new. She said, “It’s a tricky thing because it’s like you’re almost preaching to the choir. Everyone knows how expensive it is to live here and how everyone has a hard time finding a way. It’s not just teachers; it’s everyone.”

He observed the lack of stable housing just plain “wears people out.” And while new hires are enthusiastic about working here, precarious living situations lead to them feeling disconnected because, as he said, “how can you feel like you’re part of a community when you don’t have the ability to even know where you’re going to lay your head in 60 to 90 days?”

Lamont said providing the voters with the details will be of paramount importance so they can make an informed decision. “Now that it’s a ballot measure, we’ll need to present, definitively, every aspect of the vote so people understand how it is impacting them.”