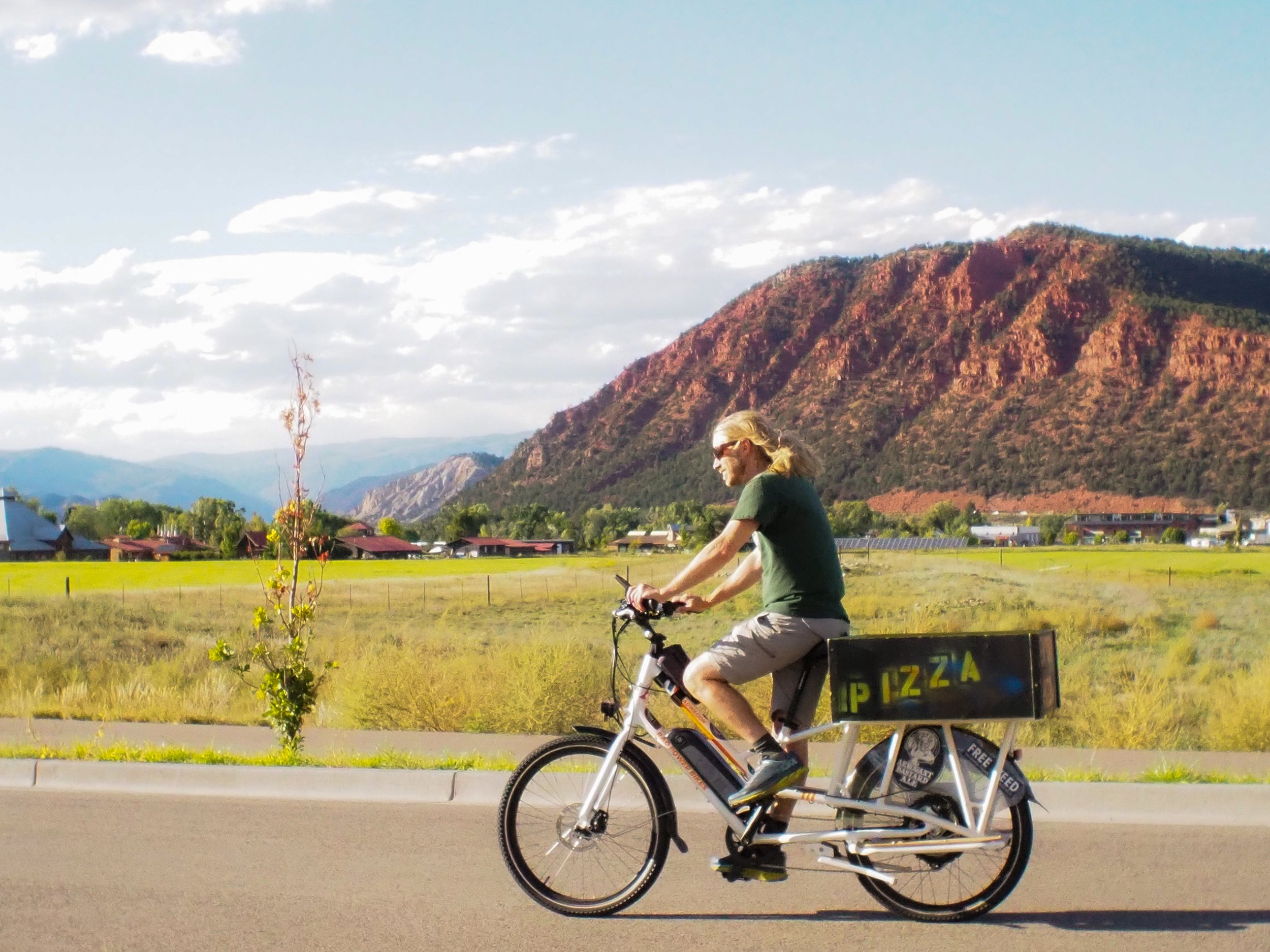 Need a fresh reason to brave the big-box development on 133? Well, there’s a new “slice of local” on Highway 133 to support! Aspen and El Jebel’s New York Pizza is tossing the dough and spreading sauces at their newest eatery, a few doors north of City Market and next to the new Ming’s Cafe location.
“We had a soft opening with friends, family and walk-ins on July 7 but didn’t open officially until July 9. We didn’t have a grand opening,” said manager/co-owner Ryan Baldwin. But, the craziness came out anyway and can be viewed on their Facebook page. In what is perhaps the tightest drone flying ever, the camera flies OUT of the pizza oven, through the party and out onto the street where Byron Turner loads up and takes off on what may be the town’s first-ever e-bike pizza delivery.
“While managing in the El Jebel location,” said Ryan, “we had a lot of customers express a want for us to be a part of the Carbondale community.” The “we” Ryan refers to includes Kevin Jones and Earl Rodgers, who co-own the other locations. All three have a hand in Carbondale. “We’re very excited to be here. We love the vibe, it’s very fun, and there are a lot of happy customers,” Ryan added.
At a time when some businesses are closing shop due to a dearth of employees, New York Pizza exerts enough of a draw to rally a team.
“Our staff is amazing and we are very thankful to have them, as it is hard to find help in the food industry at the moment,” Ryan said. “We offer ski pass assistance, we have a good environment to work in — our kitchen is open so they don’t get stuck in the back, they get to talk to people. They dig it.”
Walking in on a recent midweek afternoon, around 3:30 p.m., the camaraderie is obvious among staff and patrons. Huge flatscreen TVs air a multitude of sporting events. The bar is full and the conversations are chill. The pizza counter displays a rotation of thin-crust pizzas with every veggie color of the rainbow and a multitude of proteins. Heated by the slice, or whole custom pizzas: the choices are infinite. Up and down the valley, New York Pizza is known for its huge slices. Whole pies range from 12 inches to two feet across.
“This location has the largest space between the three shops, so we decided to bring in some new menu items and specials,” said Ryan. “Our Coors beer batter chicken tenders have been a big hit with our customers so far.” Dipping sauces span the flavor spectrum, from habanero, extra hot to tempered with mango. BBQ sauces travel the map from Korea to Carolina Gold. And of course, you’ll find the usual suspects, too — buffalo, garlic parmesan and Asian peanut.
Tap your inner Cro-magnon with a Mountain Primal burger made from Scottish Highland cattle, raised right here, in Emma. Recognizing we aren’t all carnivores, the Carbondale eatery offers veggie burgers, too, and an array of 10 inch sammies.
The beer taps flow with micros and the lighter beers, and “we are excited to share our frozen Mango and House Margaritas,” Ryan added.
For the football season, burgers or beer-batter tenders and a beer are $15. Large pizzas of any kind, with a pitcher of suds, are $30. Expect karaoke beginning in October, if you’re brave enough.
New York Pizza joins solid company, alongside Peppino’s and Whitehouse on Main Street. All three pizzerias have bike parking, patio seating and hit different pizza notes, whether it’s the sauce, the crust or the local owners we know and cherish. Let’s show some ‘Bonedale love and support all three.