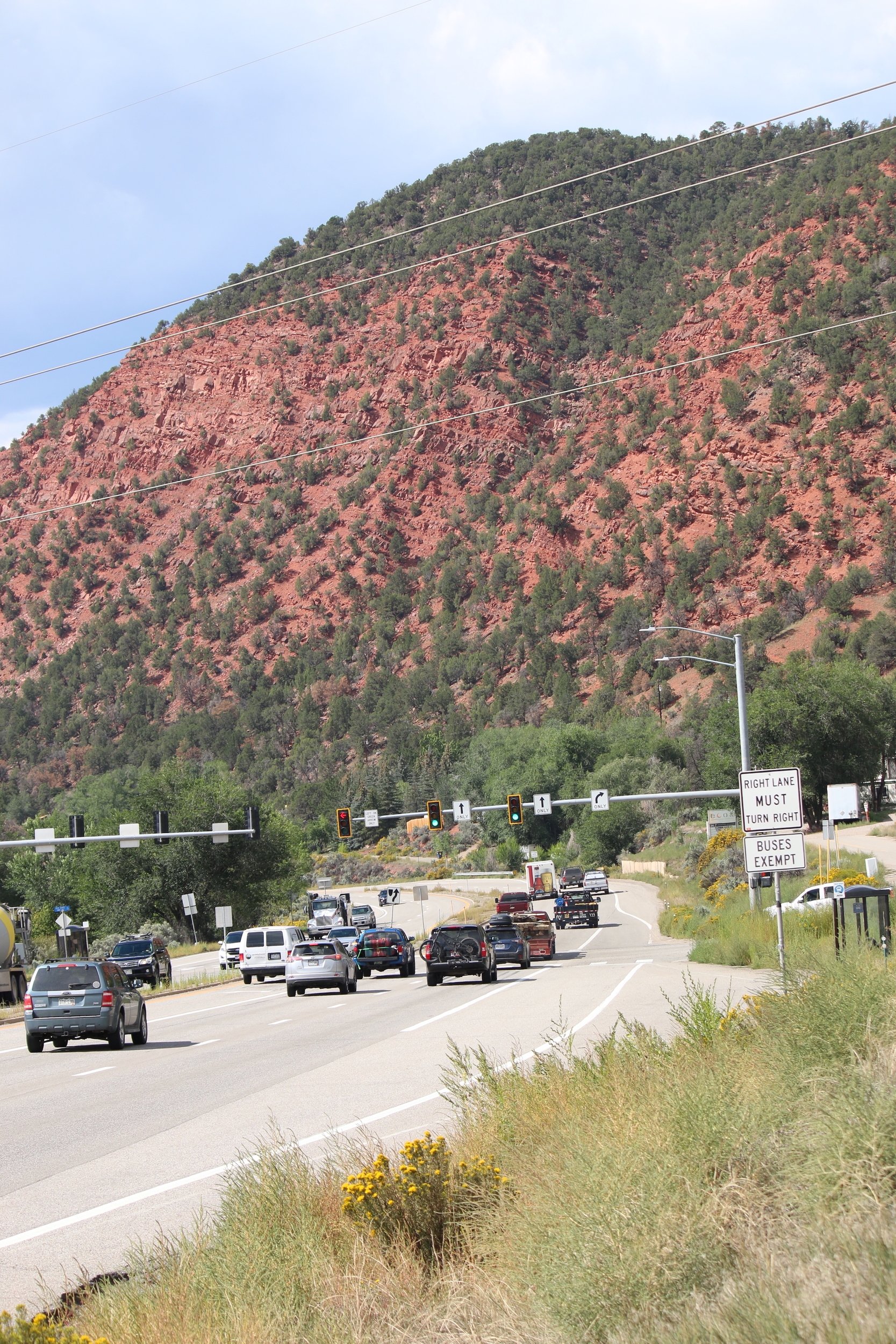 The intersection of Hwy 82 and CR 154 looking west on Hwy 82. Photo by James Steindler.

Weekly observers may have been surprised to see that on Sept. 13 the Garfield County commissioners convened their regular meeting within the county’s third district, at Silt Town Hall.
First, the commissioners “ratified” the decision to send a letter to the Colorado Congressional Redistricting Committee regarding their dismay at the latest drafted redistricting map. The new redistricting map would incorporate Rifle, Silt, Glenwood Springs and Carbondale into Senate District 5, while only New Castle and Parachute would remain in SD-8. House District 57 representative Perry Will, who would remain in his district under the proposed new plan, was present at the Sept. 7 meeting in Silt.
“Splitting our county weakens our community. It weakens our shared policy concerns on public lands, agricultural issues, housing, environmental concerns, education, public health, water quality and transportation,” the letter asserts. “Proposing to divide and dilute Garfield County in the current manner is highly suspect and is obvious and blatant gerrymandering. It is sure to destroy our voice at the federal level and cannot stand.”
Later, the county’s motor pool committee pitched that the board supplement the 2021 budget with $450,000 to afford 10 of the 40 vehicles slated for purchase in 2022. The reason being, according to the motor pool committee, the auto industry is struggling to keep up with production and getting ahead in the purchasing queue is important in order to be ahead in picking from an already limited fleet.
“With the auto industry continuing to struggle with severe semiconductor chip shortages and auto manufacturer plant shutdowns around the country and globe,” reads the committee’s memo to the board, “the effects are projected to continue into next year and likely beyond.”
Commissioner Tom Jankovsky made a motion to permit the motor pool committee to commit up to half of their 2022 budget, which he estimated at roughly $2 million, to potentially purchase up to 20 vehicles before the end of the current fiscal year. The motion passed unanimously.

Sept. 7 regular meeting
It may seem like a long time ago, but here are a couple of highlights from the commissioners’ first meeting in September.
The three commissioners began the regular session by proclaiming Sept. 17, 2021 through Sept. 23, 2021 as “Constitution Week.” The proposal was brought to the commissioners by Linda Morcom of the Daughters of the Revolution chapter in Glenwood Springs, founded in 1961.
Prior to ratifying the proposal, Chairman Martin asked Morcom why they should consider the proclamation. “Well, 234 years ago, the Constitution of the United States was drafted and this is to commemorate that event and bring back awareness of the constitution and what it means to our country,” replied Morcom. The commissioners posed for a picture with Morcom following their approval.
The proclamation’s conclusion reads: “NOW, THEREFORE BE IT PROCLAIMED, that the Garfield County Board of County Commissioners do hereby acknowledge and proclaim Sept.17 through Sept. 23, 2021, as CONSTITUTION WEEK in Garfield County, Colorado, and urge all citizens to study the Constitution and reflect on the privilege of being an American with all the rights and responsibilities which that privilege involves.”
Next, the commissioners agreed to send a letter to the Colorado Department of Transportation (CDOT) requesting there be additional signage at the intersection of Highway 82 and County Road 154, near Thunder River Market. The commissioners are concerned with the bend before the traffic light heading east on Highway 82. The arch in the road inhibits a driver’s view of the traffic light when coming from that direction.
A recent Garfield County press release informs that the commissioners’ request is to have “CDOT post additional signage close to the intersection of Highway 82 and County Road 154, alerting motorists that the nearby traffic lights are changing to red. The yellow signs read, ‘be prepared to stop when flashing,’ and a yellow light at the top flashes when the upcoming traffic lights are about to change to red, notifying drivers that they must be ready to stop.”
For recordings of these public meeting, including additional agenda items, or any archived commissioner meetings, visit: garfield-county.com/board-commissioners