From farm to roaster 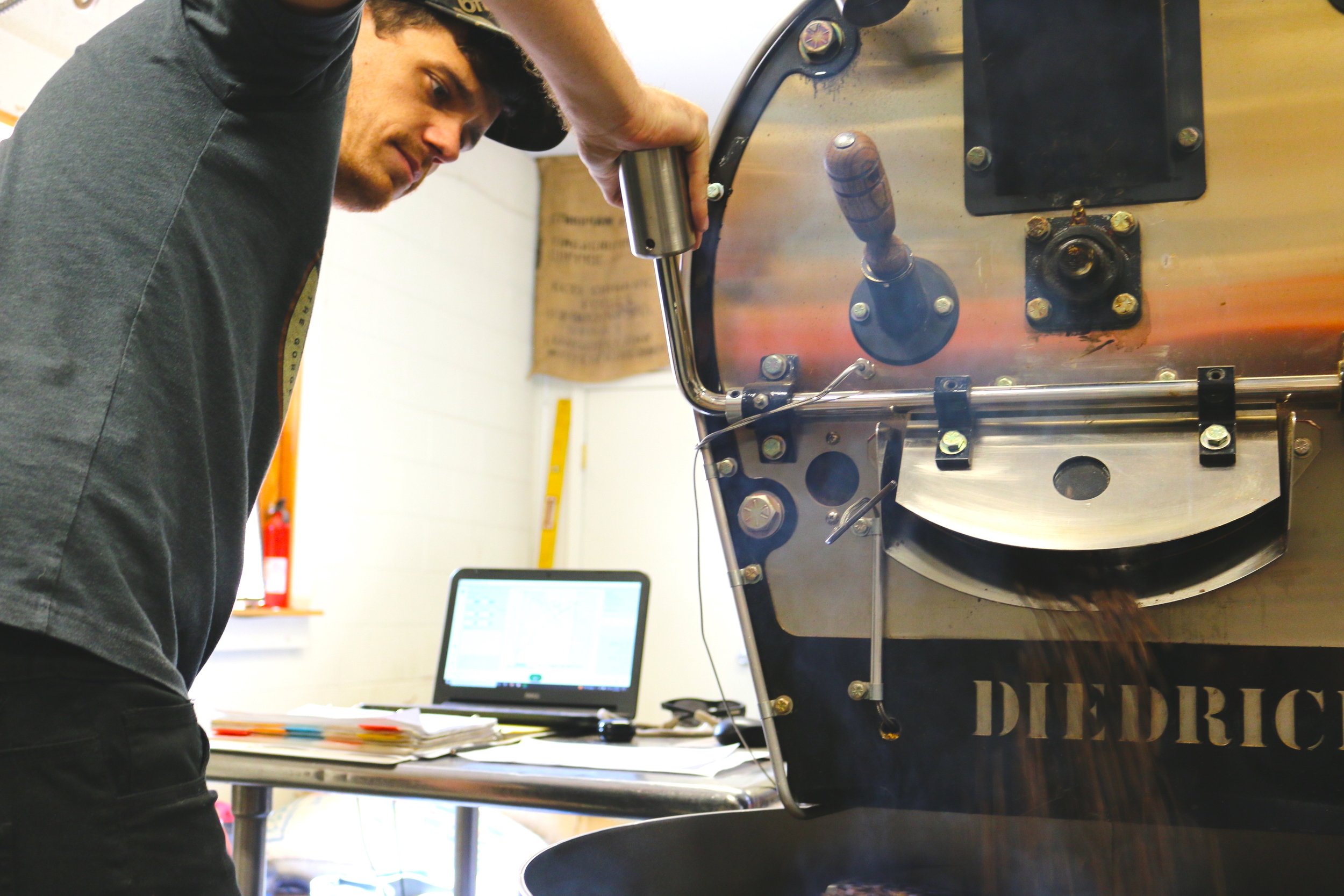 Tyler Ruff studied biochemistry in college and has applied his degree as a lead roaster of Bonfire. The roasting process is a science in and of itself; note the computer monitor in the background which is filled with graphs and fluctuating numbers. Photo by James Steindler.

Bonfire Coffee Co. recently turned ten years old and some of its employees have been with the company from the very beginning. Coffee has been brewed in their space at the Dinkel building for quite some time; some say the rich aroma has even become a part of the building’s foundation.

Years ago, Charlie Chacos, owner and operator of Bonfire, approached Joe McDonald, the Joe of Java Joe’s ( the coffee house’s original title before it became known as The Lift for a few years), about purchasing the company.

Back when it was Java Joe’s, there was a large mural of Che Guevera in the back of the cafe. Poets and artists, disconnected in the mountains and before the dawn of iPhones, were often found pondering there. Local country musician, T Ray Becker would waltz over from his camp trailer most mornings for a morning cup of joe, a cigarette and hopefully with his guitar to play a tune.

Chacos’ parents opened The Village Smithy in the ‘70s after moving to Carbondale when he was only four years old. In high school, when he got his driver’s license, Chacos drove up to Aspen to work in restaurants including The Little Nell. During college, when he was home, he would work for his folks at the Smithy.

Before opening Bonfire, Chacos had invested in a top-dollar espresso machine that brewed up some great specialty coffee for patrons of the Smithy. Chacos says their coffee sales that year went from $15,000 to $50,000.

Delving deeper into the industry, Chacos found himself at a national coffee and espresso conference in Atlanta, Georgia. “I was just awe-struck by the industry,” he said of the event. “It was energetic, fresh, new and totally different from the restaurant industry.”

While still at the Smithy, Chacos began ordering high-quality roasts from a Seattle based company. He went and visited the roasting facility and was nothing short of impressed. He stuck with the roaster for a while before “bobbing around” between a few others.

In 2010, The Lift’s owner, Peter Mertz, ran into Chacos at a gas station and asked if he’d be interested in taking over, which he eventually did. Chacos figured he’d turn to one of the roasters he’d been purchasing beans from for the Smithy.

“When we opened Bonfire, I was set on getting a Portland or San Francisco roaster — it was going to be the best coffee,” said Chacos. “My initial tagline was:‘big city coffee in a small town.” As it turned out, something was brewing right under his nose. “Lo and behold, this roaster down in Glenwood, Jeff Hollenbaugh of Defiant Bean [Roasters],” was roasting beans right here in the Valley.

Bonfire ended up using half of Defiant’s weekly production. After a few years, as a mutually-beneficial endeavor, Bonfire struck a deal with Hollenbaugh.

“He wanted some help on the roasting side,” said Chacos, “and so we merged into one company and that’s when we became a full-service coffee company.” The merger took place in 2013. Four years later, Hollenbaugh moved on from the business and Chacos took over as lead roaster.

When it comes to beans, “Every country has its own little characteristic,” Chacos explained, “just like wine.” For Bonfire, about 85%of the beans are not roasted beyond the point of losing their unique original flavor.

According to Chacos, the industry standard and “cream of the crop” these days are Ethiopian beans. However, he added, “People who like chocolates, caramel and maybe some nuts, should go with Brazilian and Colombian [beans]. It’s definitely dependent on where it’s coming from, and then we kind of roast for that specific bean to highlight that country’s flavor.”

Bonfire sources most of their beans through InterAmerican Coffee importers. “Most of what we’re looking for,” began Chacos, “is sustainable practices on the farm and small farms that pay a fair minimum wage.”

Some of the beans, considered single origin, come from another importer: Sustainable Harvest. “It used to be, in the ‘80s and ‘90s, a single origin meant that this coffee came from one region,” Chacos stated, “but now, a single origin generally refers to a single farm or coop.”