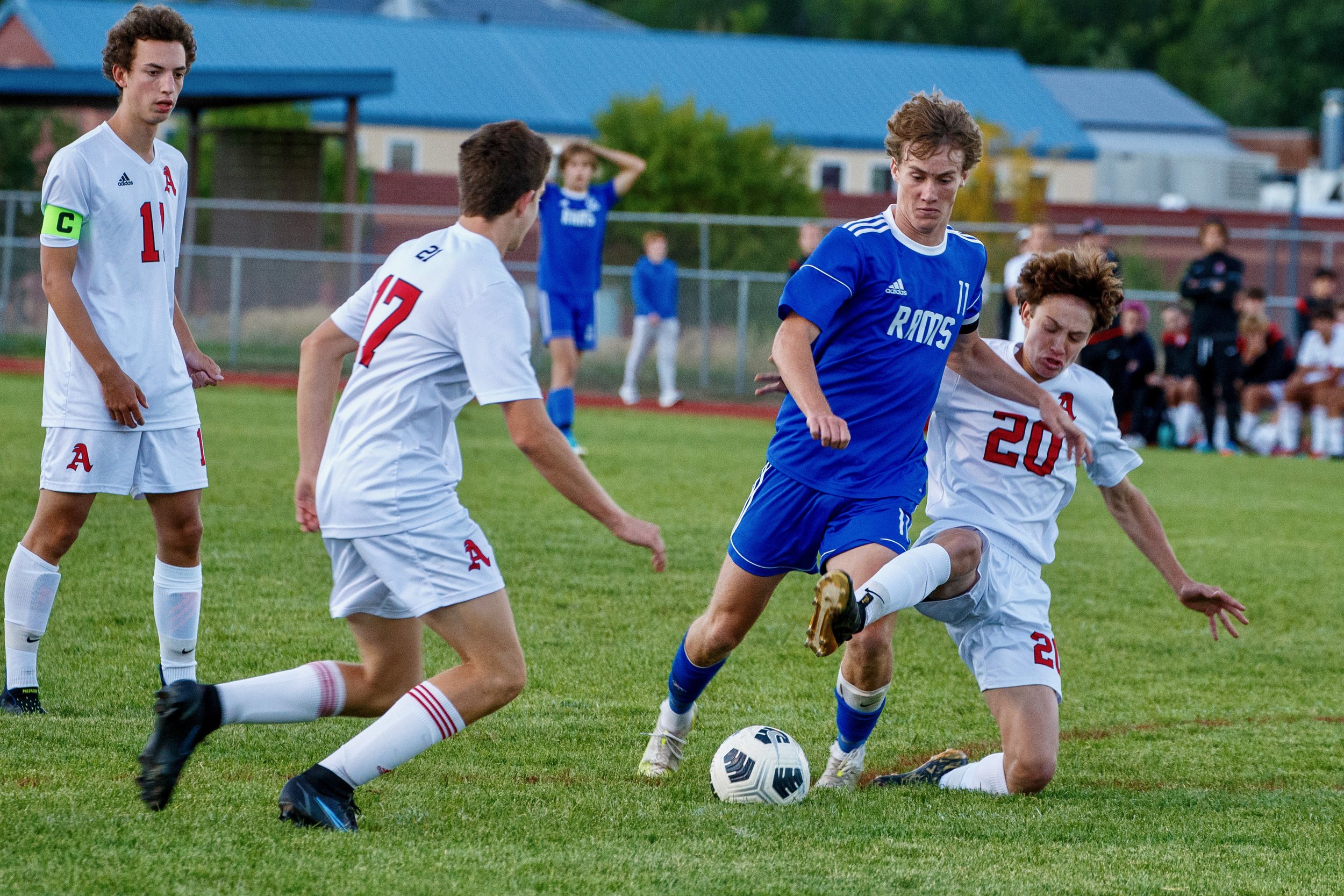 The RFHS soccer team took on Aspen in a highly contested match that saw one Ram player ejected after two yellow cards. In this photo, midfielder Ross Barlow breaks through Aspen's defense. The Rams went on to win, 3-1, despite playing a man short for the final 20 minutes of the game. Foto by Sue Rollyson.

The Rams’ sole defeat was on Sept. 18, with a 2-0 loss to the Liberty Commons Eagles (Fort Collins). Rams Head Coach Nick Forbes said, “We had a little bit of adversity, but we’re really strong.”

On Sept. 28, the Rams shut out the Delta Panthers 7-0 in varsity play and will face the Coal Ridge Titans in New Castle on Sept. 30.

In recent contests, Rams MaxPreps “Player of the Game” were goalkeeper Jacob Martin in the Sept. 21, 3-1 victory over the Aspen Skiers and Jose “Junior” Mercado in the Sept. 24, 3-2 win over the Palisade Bulldogs.

In a much-anticipated home game, on Oct. 1 at 6 p.m., the Rams will play the Colorado Rocky Mountain School (CRMS) Oysters in non-league competition.

Nick Forbes, in his tenth year as Rams head coach, has a unique relationship with CRMS. His father, A.O. Forbes, is a CRMS teacher and was Nick’s soccer coach during high school. The elder Forbes also coached Rams assistant coach Jeff Mohsenin when he attended CRMS.

Forbes said of Mohsenin, “I stole him from CRMS’s program when I started coaching here. And so for me, I love playing CRMS just because it’s a home game.”

“We played CRMS once this season and beat them 8-0. That was their first game, and I think, their fourth day of practice. They are at a distinct disadvantage just based on their season starting a lot later,” Forbes shared.

Mercado started as a kid, playing U6 soccer. As a center mid, he enjoys playing defense because “I like being there for the team and knowing they can rely on me.” He added, “I like the emotion of beating a cocky winger.” Mercado continued, “I feel like we all came motivated this year, and that’s been a big part of our success so far.”

Mercado has extended family in Carbondale and wants to stay close by, attending a college in Colorado.

Stainton has played defense his entire career and, last year, moved to center back. “I don’t know how I ended up on defense, but it has its benefits. I’m not a star and don’t get all the big goals and stuff, but defense is fun,” he said.

Of his leadership role, Stainton explained, “When I was a freshman, I looked up to my captains a lot. You can help teach the younger players what they need to do so that in their senior year, they can do the same as us.”

Stainton is checking out West Coast colleges and would like to play club soccer wherever he goes.

Barlow said with a laugh, “I’ve been playing soccer ever since I could walk, pretty much. My mom [Rams Athletic Director Crista Barlow] had me playing.”

He is an attacking center midfielder, a kicker for Rams football, and runs for the Basalt High School cross country team. His favorite sport? Barlow quickly replied, “Oh, for sure, soccer.”

Barlow is looking at a few colleges, including the Universities of Wisconsin-Madison, Washington or Colorado. If he doesn’t land with a soccer program at a college, he said, “It’s not a big deal because there’s a ton of [travel soccer] club opportunities.”

All Rams players interviewed had high praise for Forbes. “He’s a great coach and keeps the positive all the time, “Stainton said.

Forbes said of the Rams’ successful season thus far, “I’m just excited to be back out here, and this group has been fun to coach.”