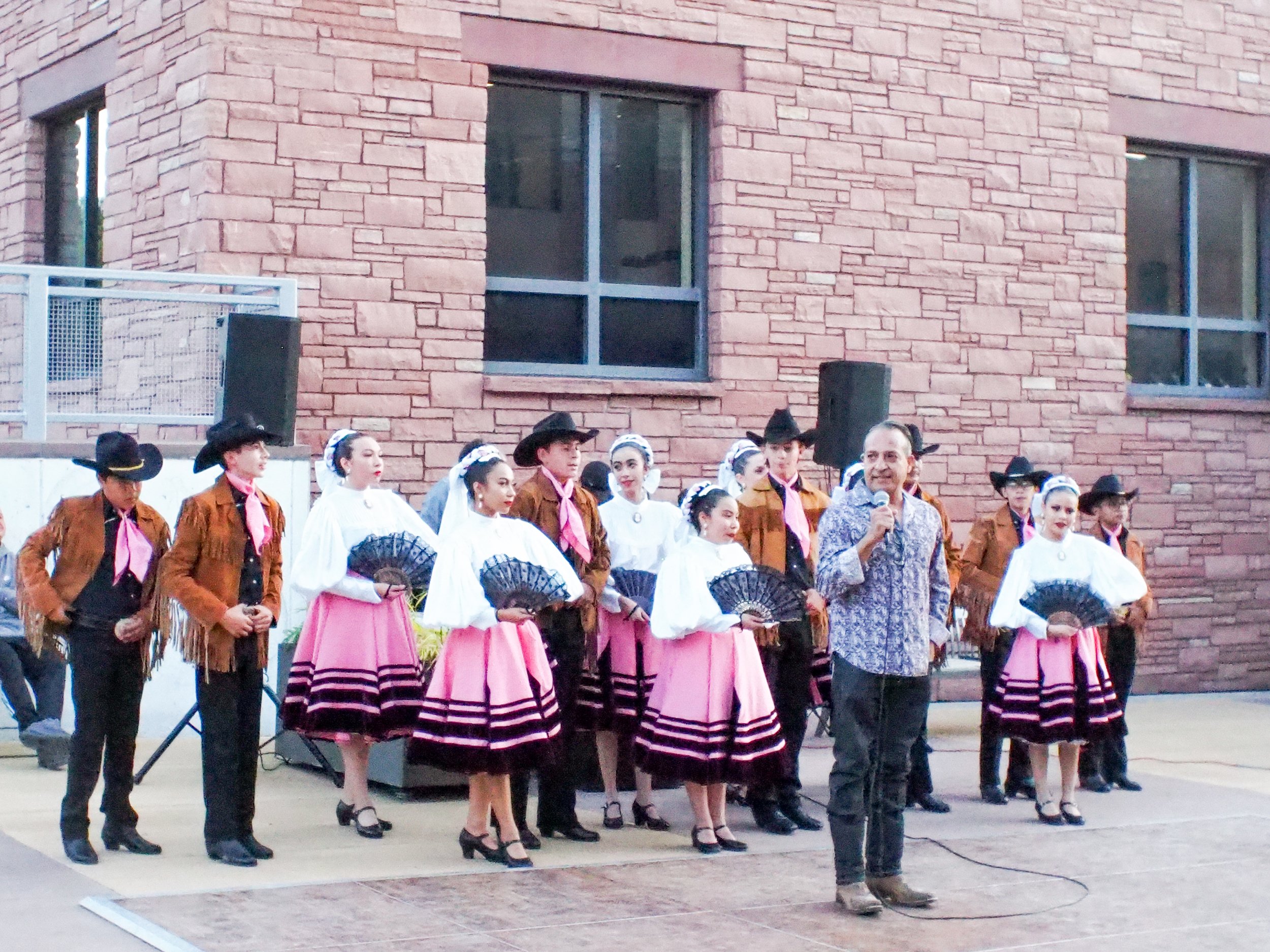 Editor’s note — unfortunately, the performance at Carbondale Library scheduled for Oct. 9 has been cancelled.

The small plaza next to the Glenwood Springs branch of the Garfield County Public Libraries District (GCPLD) resonated with rhythmic claps, stomps and cheers on Saturday, Oct. 2. Twirling students, wearing intricate costumes accented with pink, performed polka dances for a live audience. It was Aspen Santa Fe Ballet (ASFB) Folklórico’s second performance since the beginning of the pandemic and the dancers beamed with enthusiasm.

Folklórico is a free, after-school program that trains children throughout the Roaring Fork Valley to appreciate the cultural richness of Mexican folkloric dance, influenced by European, African and indigenous traditions.

“We’re so excited to be performing again,” Francisco “Paco” Nevarez-Burgueño told The Sopris Sun. Paco, formerly a chemical engineer from Chihuahua, Mexico, has directed the program for nearly 20 years. “At one point, I was thinking Folklórico was going to disappear.”

In March 2021, with COVID restrictions persisting, ASFB announced that the professional performing arm of the company had to dissolve. However, ASFB, a nonprofit, chose to maintain a fund for its ballet schools and youth Folklórico programs in Colorado and New Mexico. “They wanted to keep the program because it’s a community program,” said Paco.

Nonetheless, “It’s like it started all over,” he continued. With roughly half the number of students as pre-pandemic and a tighter budget, Paco is mending and enhancing costumes rather than investing in new ones. When he started in 2002, there were perhaps twenty sets of costumes, he shared; now there are hundreds stored in a warehouse.

For now, they are sticking exclusively to outdoor performing opportunities. Wilderness Workshop kicked off the revival at their Community Party event on Sept. 24. Next, GCPLD’s new education and events manager, Alex Garcia-Bernal, invited Folklórico to participate in the district’s National Hispanic Heritage Month events.

“Garfield County in these 19 years never shared interest in having a performance, until now with Alex. He called us,” said Paco.

Garcia-Bernal recently moved to the area from Arizona, where he worked for 14 years at the Yuma County Library District and led Spanish-language outreach. Since joining GCPLD, he has organized regular Lotería clubs, playing “Mexican BINGO” every first and third Thursday in New Castle and every second and fourth Wednesday in Rifle. Bolsitas Rojas, another new program, provides parents of toddlers with activities in Spanish and a take-home bag of books at a different library branch each day of the week (details at https://gcpld.org/). Both of these initiatives are expected to continue at least through the end of the year.

Other upcoming National Hispanic Heritage Month events include a conversation with Reyna Grande, author of “The Distance Between Us,” via Zoom on Tuesday, Oct. 12, at 6 p.m. and a second Folklórico performance, this time in Carbondale, on Oct. 9 at 6 p.m.

The Carbondale performance will feature different costumes and a different style of dance, “something more indigenous,” according to Paco. He notes that the students are valuing their practice more than ever. “Before the pandemic, they came because that was something in their schedule. Then we stopped for a few months — like nothing. Then we started again with COVID restrictions and everyone was so happy — they didn’t care about masks or checking temperatures. They just want to be dancing again, together with friends.”

To participate in partner-dancing, students are expected to be fully vaccinated. Before that was a possibility, practices focused on choreography that do not involve partnering up.

“Everything is changing every day. We need to be adapting to those changes and new policies,” said Paco. “We need to keep going.”

Fans of Folklórico will be pleased to know that Día de los Muertos celebrations are planned to return to Carbondale this year, with a full procession and outdoor performance in early November. As exemplified by the new mural on Fourth Street, Day of the Dead has quickly become an iconic tradition in Carbondale.

As for GCPLD, Garcia-Bernal is eager to organize events aligned with other national months honoring global heritages. He is also thinking about new regular programming, such as a movie club that makes use of the district’s subscription to Kanopy, an online streaming service free to library card holders. GCPLD hours are also extending beginning Nov. 1, with all six libraries opening at 10 a.m., Monday through Saturday.