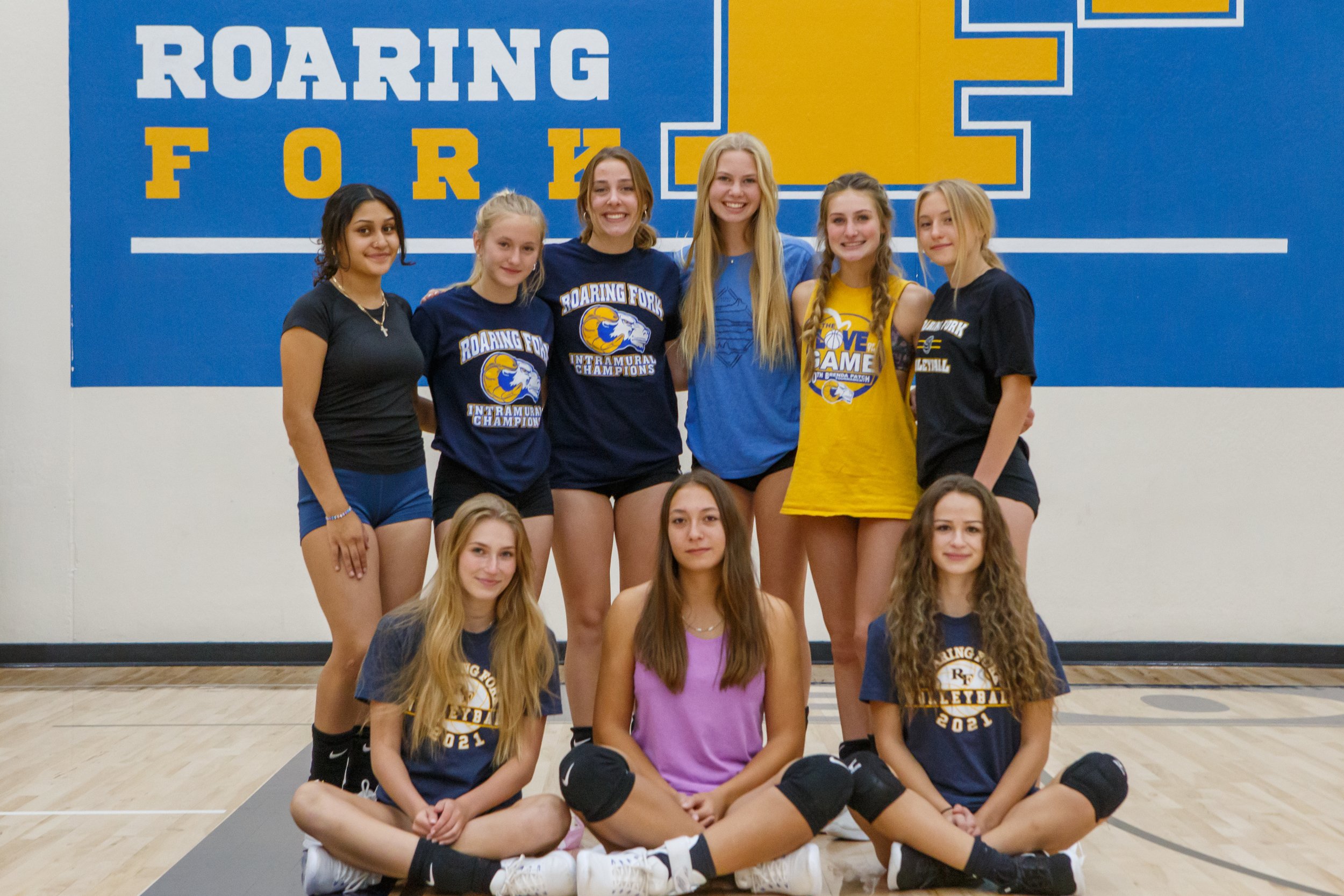 Grace Ferguson (who plays middle and outside), Celeste Fullerton (right-side) and Sienna Pargiter-Walker (middle blocker) reflected on this season — compared to last, with its COVID-19 restrictions — graduating from RFHS and plans for college.

This season began a bit slowly, Pargiter-Walker said, with team members getting to know one another, “because we have a young team, it was a little like we started over, but I think we’ve grown to be a pretty close team.”

In her fourth year of playing under the leadership of Rams head coach Karen Crownhart, Ferguson said, “I think we have a pretty good culture, better than other years.” Ferguson plays court and beach volleyball year-round with United Volleyball Club of the Rockies, which offers club volleyball for girls ten to 18 years old.

Traditionally a fall season sport, girls volleyball was played this spring, in a season shortened and jostled by COVID-19 protocols set by the Colorado High School Activities Association, the state’s governing body for high school athletics.

Last spring was an abbreviated volleyball season, with fewer games. Some student-athletes had only one weekend to transition between sports.

Pargiter-Walker, in her second year with the Rams, plays basketball, soccer and runs track. “I like this fall season better than last [spring’s] season, which felt rushed. It was really compacted. I joined a week into the season and I had three days before I played my first game, and I’d never played volleyball before,” said Pargiter-Walker. “I think that was stressful — going sport to sport to sport, without much time to adjust. This season seems a lot easier. We’ve had time to bond better and to get closer to our teammates and learn more about volleyball and to get a good rotation going.”

The three seniors are zeroing in on choosing colleges. Fullerton, who also runs track, is visiting one of her top prospects later this month — Hawaii Pacific University in Honolulu. Ferguson wants to go to college in California, playing either court or beach volleyball.

During our interview, Pargiter-Walker announced she has committed to Kansas State University as a Division I athlete in their women’s rowing program. Her announcement greeted by cheers from her teammates, she added, “I’ve never rowed before, but I want to try something new, and I loved the school when I visited there. I love the team, and they have a very good engineering program, which is what I want to do — environmental engineering focusing on renewable energy.”

Both Ferguson and Fullerton want to major in biology on the pre-medical track.

Reflecting on being a senior at RFHS, Pargiter-Walker said, so far, it has been extremely busy. “It’s stressful, but it’s exciting at the same time — college admissions and scholarships — the deadlines are very stressful, but I think it’s also exciting,” she said.

Fullerton, “Honestly, being a senior is fun, and it’s cool to be role models, but it’s also a little bit sad because high school goes by so fast and all these memories come back, and you think, ‘Oh, my gosh, that didn’t even feel like that long ago.'”