The cost of choice 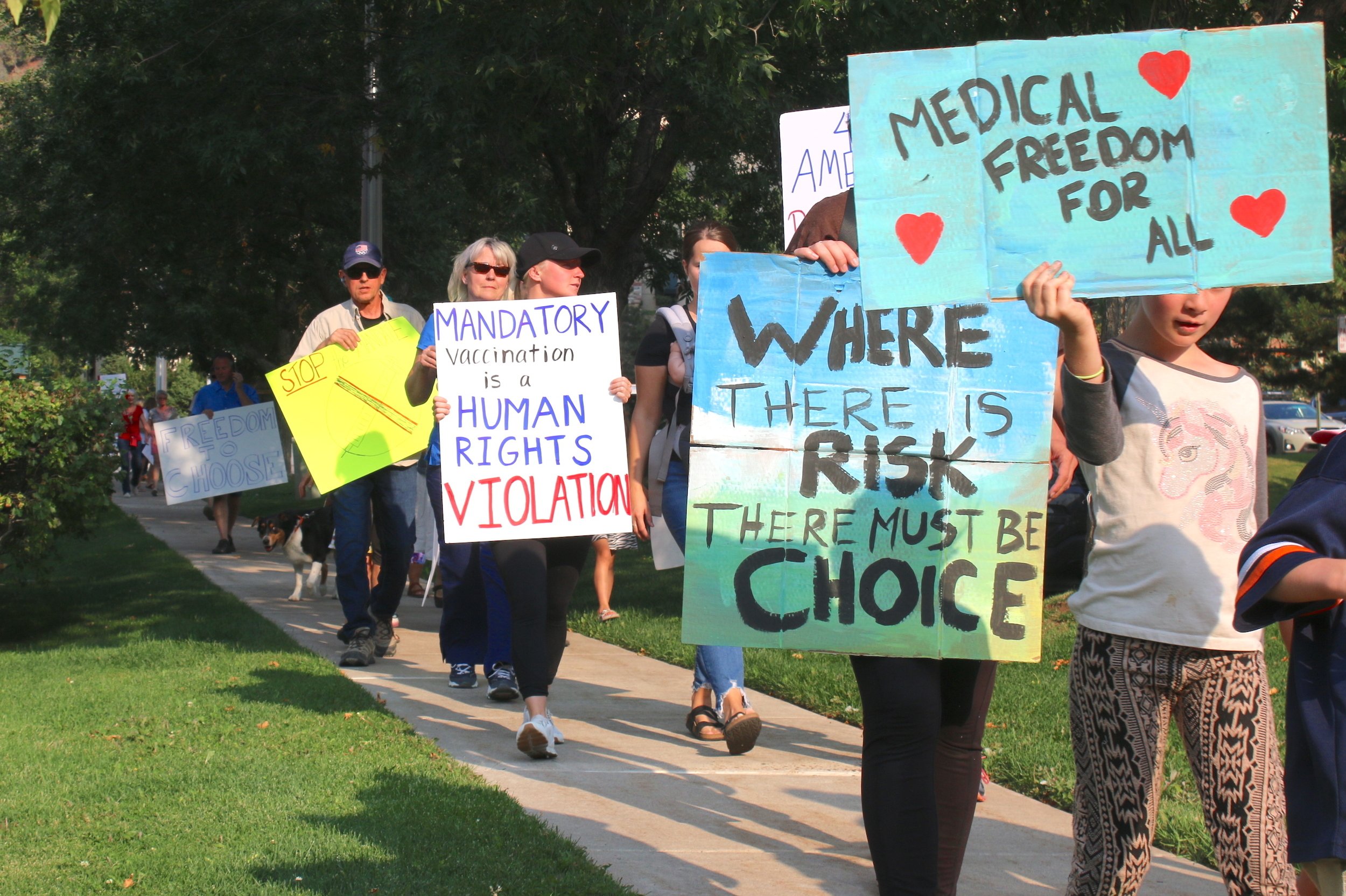 On Aug. 30, a large group of folks protested the looming vaccine mandate by marching from Valley View Hospital to Grand Avenue in Glenwood Springs. Photo by James Steindler.

On Aug. 30, the Colorado Board of Health voted 6-1 in favor of a mandate requiring that medical personnel be vaccinated against COVID-19 by Oct. 31. In turn, Valley View Hospital gave its employees until Oct. 1 to receive a vaccine.

The minutes from the Aug. 30 meeting clarify the state department’s jurisdiction, which has some limitations. “The department has the authority to enact and enforce regulations over all licensed healthcare facilities and agencies; it does not have authority over individual healthcare practitioners or staff, and it does not oversee other settings where patients seek medical care including primary care offices and urgent care locations.”

The state department acknowledged that the mandate may further decrease their labor pool. The Aug. 30 minutes state that, “[Colorado Department of Public Health and Environment] staff responded to some of the concerns raised in oral testimony, emphasizing the department is sensitive to staffing concerns and is committed to helping facilities with staffing shortages to ensure there is adequate healthcare across Colorado, as they have done since the pandemic began.” However, when the board went into deliberation, they discussed “serious concerns over potential staffing shortages resulting from this rule,” the summary also reads.

When it comes to processing exemption requests, those decisions are left up to each medical facility.

In a recent statement to The Sopris Sun, Valley View CEO Brian Murphy, MD said, “Valley View recently reported to Colorado Public Health that we have 1,392 healthcare workers — including employees, contractors and support staff. At this point 1,364 (98%) of our workforce has put patient safety first and has chosen to receive the vaccine.” That leaves 28 folks, presumably unvaccinated and no longer employed by the hospital.

Joshua Peters, P.A. was a physician assistant in the orthopedic clinic at Valley View for seven years. Despite the trials and tribulations of the past year and a half, he worked through his final shift on Thursday, Sept. 30, knowing it would be his last.

“I love living here and I love working here,” stated Peters, who moved to the Valley to practice medicine and raise a family. He and his wife have two children.

Following the Aug. 30 meeting, Peters recalls receiving a mass email from the Valley View administration to its employees. It outlined the hospital’s policy in response to the state’s mandate. Employees who did not receive the vaccine or a religious or medical exemption by the end of September would be let go. Peters explained that the hospital added a ten-day grace period, to give employees the option to change their mind by Oct. 10 and finally consent to being vaccinated.

Because of the relatively rapid creation of the COVID-19 vaccine — as compared to other vaccines — Peters is uncomfortable receiving the treatment, which he still considers to be in the experimental stage.

On Aug. 23, the Pfizer vaccine was fully approved by the Food and Drug Administration for persons 16 or older, but the other two options have only been approved for emergency use thus far.

When he applied for an exemption, Peters said he told the administration he would happily continue to take extra precautions, including wearing a special KN95 mask, which reportedly had been required of non-vaccinated employees prior to the mandate. “If I can choose not to get vaccinated, I will continue to wear the mask, get tested and do all of those things to keep my job and keep myself and everyone safe,” Peters said he had assured the hospital.

Peters applied for a medical exemption through the hospital and attached a note from his doctor explaining that he had previous auto-immune reactions to the flu vaccine. His medical claim was denied. He then applied for a religious exemption in a final effort to keep his job, but that too was denied.

Reflecting on the final decision, Peters said, “Do you trust yourself and your gut feeling, or do you say, ‘well, I don’t really want to do this but I want to have a job. If I want to have a job, I have to go against my feelings and do something I’m not comfortable with.’”

According to a statement Valley View made to The Sopris Sun, “We did receive requests for religious and medical exemptions and, after thorough review, were able to grant a few of them when doing so would not increase the risk of infection for our patients and other essential staff.” Valley View did not specify the nature of the requests which were granted.

A Sept. 30 article in the Post Independent reported that 18 exemption requests had been filed at Grand River Hospital in Rifle, and about half were granted.

When asked if he would have considered leaving the hospital before the mandate, Peters stated, “No, absolutely not. I love working here. Over seven years, I’ve developed really good relationships with my patients and the staff; it’s going to be really hard to not be here anymore.”