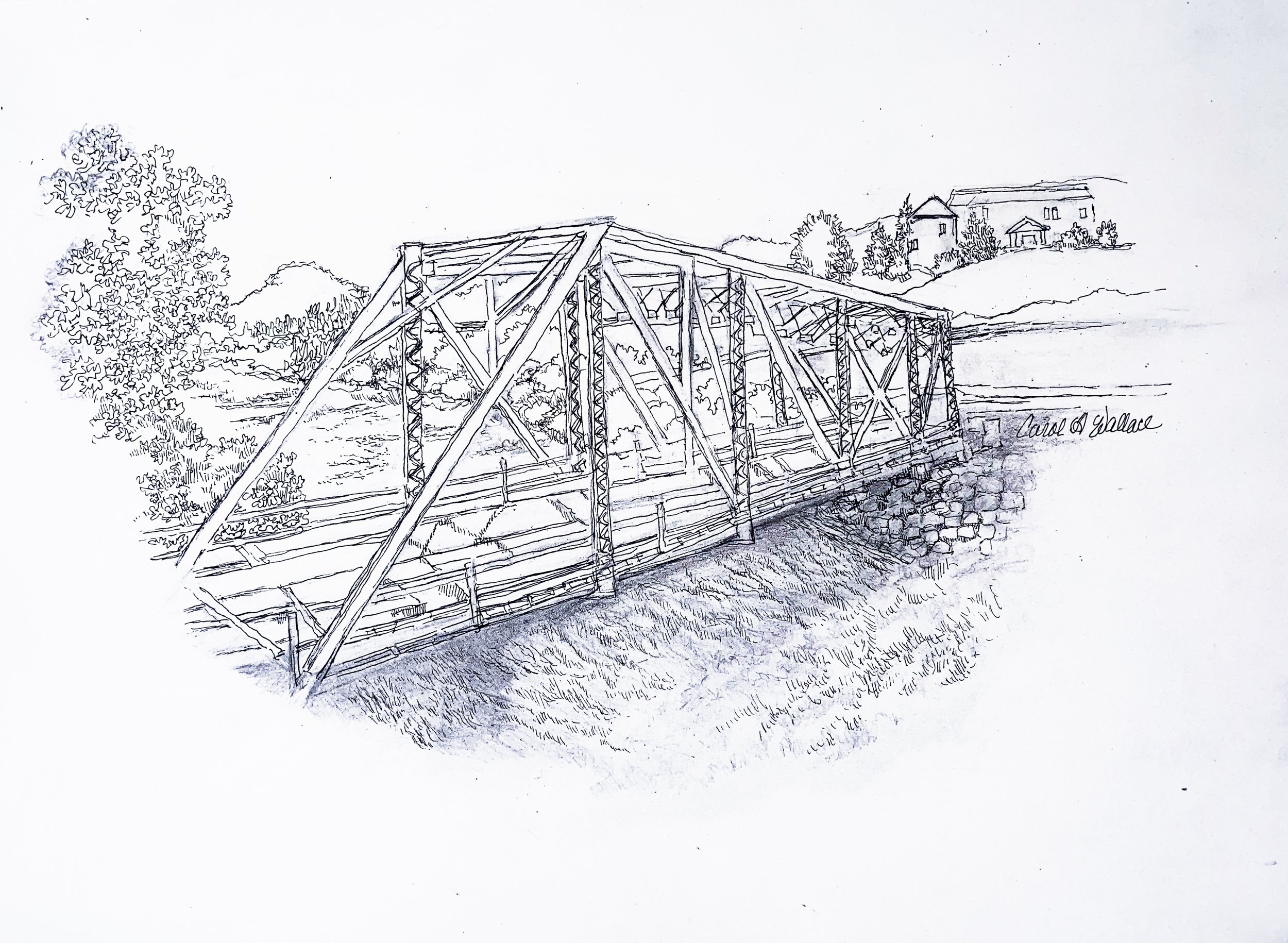 The Hardwick Bridge as depicted by artist Carol Wallace for The Sopris Sun.

Hardwick Bridge is not falling down, but it definitely needs new decking and side railings to safely carry pedestrians and bicyclists across the Roaring Fork River. This iron truss bridge, located north of the Iron Bridge and West Bank subdivisions, was erected in the 1920s for cars and trucks, said Jeff Gatlin, chief operating officer of the Roaring Fork School District (RFSD). The restored bridge passage will connect to the non-motorized Rio Grande Trail.

When the work is completed, possibly by the end of the year, the bridge will be “the showcase” of the $2.4 million improvements to County Road 109 and riverbank restoration that has been underway, Gatlin said. Early one gray morning last week, Gatlin and Garfield County’s Deputy County Manager Fred Jarman spoke with The Sopris Sun beneath the yellowing cottonwoods at the bridge, within earshot of the earth-moving equipment.

“The need for a way to get kids safely to school became apparent after the Riverview School opened in 2017,” said Gatlin. The school district applied for, and received a $150,000 Revitalizing Main Street grant from the Colorado Department of Transportation (CDOT) for the bridge repair last spring. Since the new portion of the trail on both sides of the bridge does not lie within the Rio Grande’s old rail bed, the name for this section has yet to be decided, Gatlin said.

Riverview School, with more than 400 students in pre-kindergarten through eighth grade, is located about a mile from the bridge. Giving Riverview students and parents a safe route to walk or bike to school was the RFSD’s chief concern, Gatlin said. “It’s nice though that the school grant includes mutual benefits for the neighboring communities, and all people who walk and ride.”

“The bridge’s structural system is sound,” said Brad Hancock, a designer for Oddo Engineering in Glenwood Springs, which evaluated its condition. Hancock learned that the bridge was built in 1923, possibly in Denver, but its complete history is unclear. Historic archives suggest the bridge was moved from the Cooper Street Colorado River crossing in Glenwood. According to Hancock, its current location was the original one. He said he analyzed its construction to understand how it was assembled. “It came out of a kit,” he said. “It had many parts and pieces, like an erector set,” he said. Hancock said that half the bridge was riveted, and half was bolted, which a close look will reveal to discerning passersby after the bridge is back in use.

The wood composite product that will resurface the bridge’s deck will “keep it looking authentic,” Hancock said. Hardwick Bridge was named for the Hardwick family that took up ranching at Four Mile Creek in 1881, according to Glenwood Springs Historical Society records.

Deputy County Manager Fred Jarman credited RFSD with getting the bridge repair funding from the Revitalizing Main Street grant. “It took us years to figure out how to do this,” he said.  The full construction project required a welter of public and private entities. “It took government working together, how refreshing is that?” Jarman joked. In addition to Garfield County and RFSD, approval was needed from the Roaring Fork Transportation Authority, CDOT and the Colorado Division of Wildlife — which manages the Sam Caudill State Wildlife Area on the Roaring Fork. When the project is completed, the highly congested river put-in point beneath the bridge will also be improved, Jarman said. Two private participants are The Iron Bridge Golf Course, which granted a right-of-way to allow the trail to cross its property, and an Iron Bridge Subdivision homeowner, who after some negotiation, Jarman said, consented to an easement for the trail to cross their driveway.

The Revitalizing Main Street grant was part of a $30 million, statewide COVID stimulus package approved by the legislature in 2020 to improve trails and expand opportunities for meeting outdoors, according to a CDOT spokesperson. Glenwood Springs got Revitalizing Main Street funds this year for its Devereaux Road pedestrian passage at Two Rivers Park, and the installation of simple wooden shelters for dining outside at restaurants along Grand Avenue.