RVR walks us through time 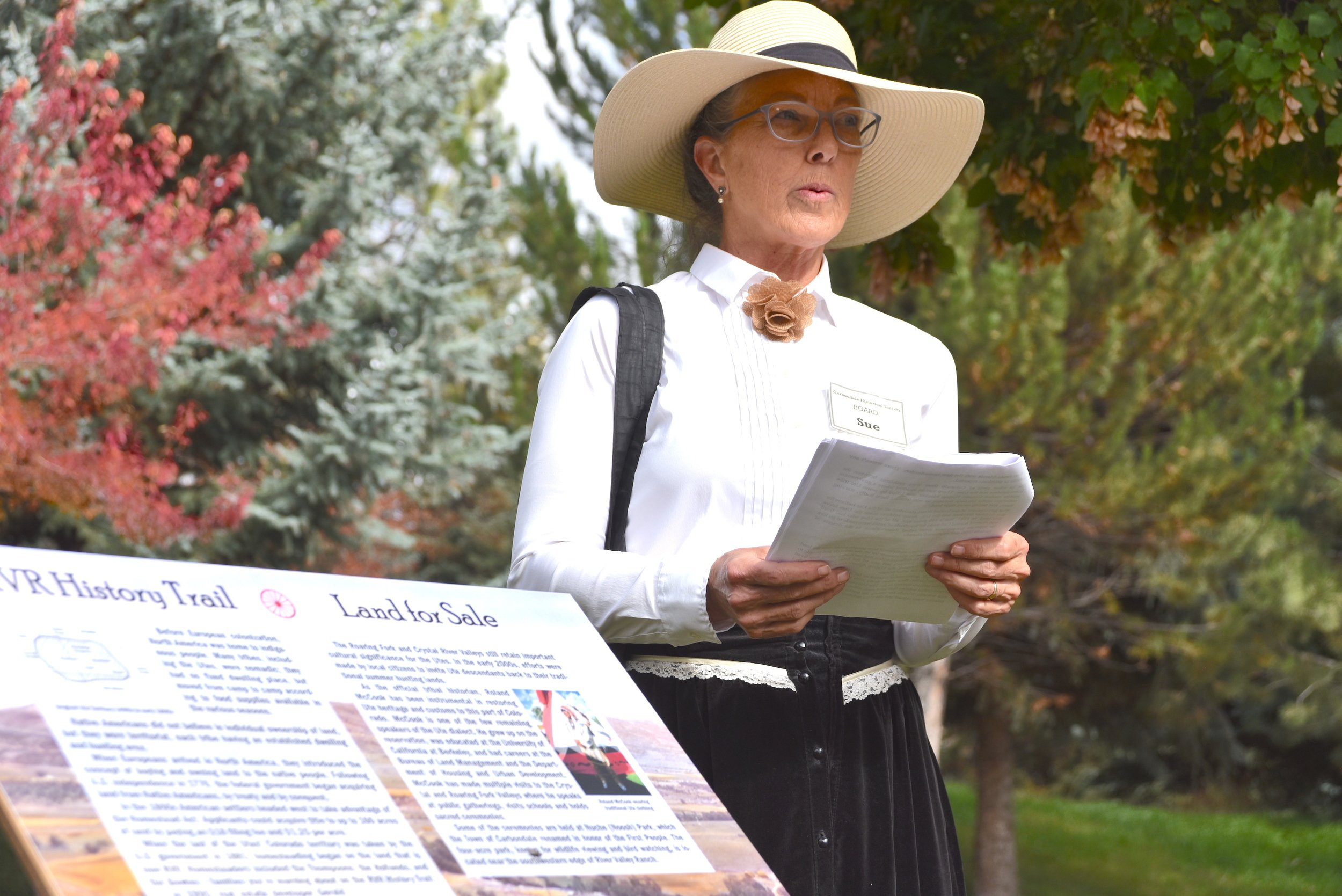 Sue Gray expounds on her knowledge of the history of the Noocheu (Utes) who were stricken from the land locals call home today. Photo by James Steindler.

Fifty people, give or take, showed up to the grand opening of the new River Valley Ranch (RVR) History Trail. In conjunction with the Carbondale Historical Society, RVR installed several informational panels along the paved path which circles the development.

The premise is that folks can take a stroll and learn some history about the area at the same time. The 2.7-mile history path is marked with an image of a wagon wheel near each panel so pedestrians can stay on the right track.

Fork Valley,” said Sue Gray, vice-president of the Carbondale Historical Society. Gray led the first official walking tour. “I learned so much doing research on this project, and am excited to share that knowledge with all who want to visit the RVR History Trail. This project is a real community treasure.”

According to a press release, “During the planning of RVR, developer Gerald Hines expressed a desire to honor the heritage of the Pleasant View Ranch. As a result, some of the original houses, sheds and the old Thompson barn were preserved and moved to their current locations.”

Each panel covers a different component of history which occurred around RVR. One panel refers to the Utes who lived in the area before settlers forced them out. According to Gray, the word “Ute” was first put to use by the Spanish conquistadors and later adopted by other European settlers. They, however, called themselves Noocheu (NOO-shu) which translates simply to “The People.” According to Roland McCook, descendant of Chief Ouray, the full meaning is: “People of Substance.”

The Noocheu, also spelled “Nuche,” were gradually confined to reservations and, in 1876, when settlers began to settle in the Crystal Valley, the area was still part of an expansive reservation. This too was taken away from the natives after an uprising in Meeker, remembered as “The Meeker Massacre.” This time, the Noocheu were banished to reservations hundreds of miles away.

In the 1880s, settlers moved in and started to do what settlers do best: settling. Taking full advantage of the Homestead Act, families paid the $18 filing fee to establish homesteads of up to 160 acres. Later, they could acquire the title to the land for $1.25 per acre.

The Holland and Thompson families owned the 1200-acre Pleasant View Ranch, which preceded RVR, for 100 years before the family began selling off pieces of the ranch beginning in the 1970s.

Oscar Holland was one of the first commercial potato farmers in the area. He married Hattie Thompson and the two moved into the Thompson House, also along the trail, which was considered the “crown jewel” of the property, according to Gray.

Lewis Ronald Thomspon, who goes by Lou Ron, is a descendant of the Thompson-Holland family and joined the opening walking tour. Lou Ron was born in a log cabin on Pleasant View Ranch and he recalls running cattle through there in the 1960s.

As a kid, Lou Ron said, “It was great. We had a lot of freedom to roam around the hills and get into some trouble that we probably shouldn’t have gotten into; not too much trouble,” he added, “Because everybody knew everybody, you couldn’t get away with much.”

When asked if seeing the changes wrought by development has been bittersweet, Lou Ron replied: “I guess that would be a good term for it. But, on the other hand, I think it’s great that the development occurred the way it did.” He included, “My mom [Jewel Thompson] used to always say, ‘We can’t be selfish about it and keep it to ourselves.’”

“The official start of the History Trail is in Orchard Park, owned by the Town of Carbondale and maintained by the River Valley Ranch Master Association,” reads the press release. “Orchard Park is located at the intersection of Crystal Canyon Drive and Crystal Bridge Drive. The trail, which takes about two hours to fully explore, is best experienced by walking or riding a bicycle.”