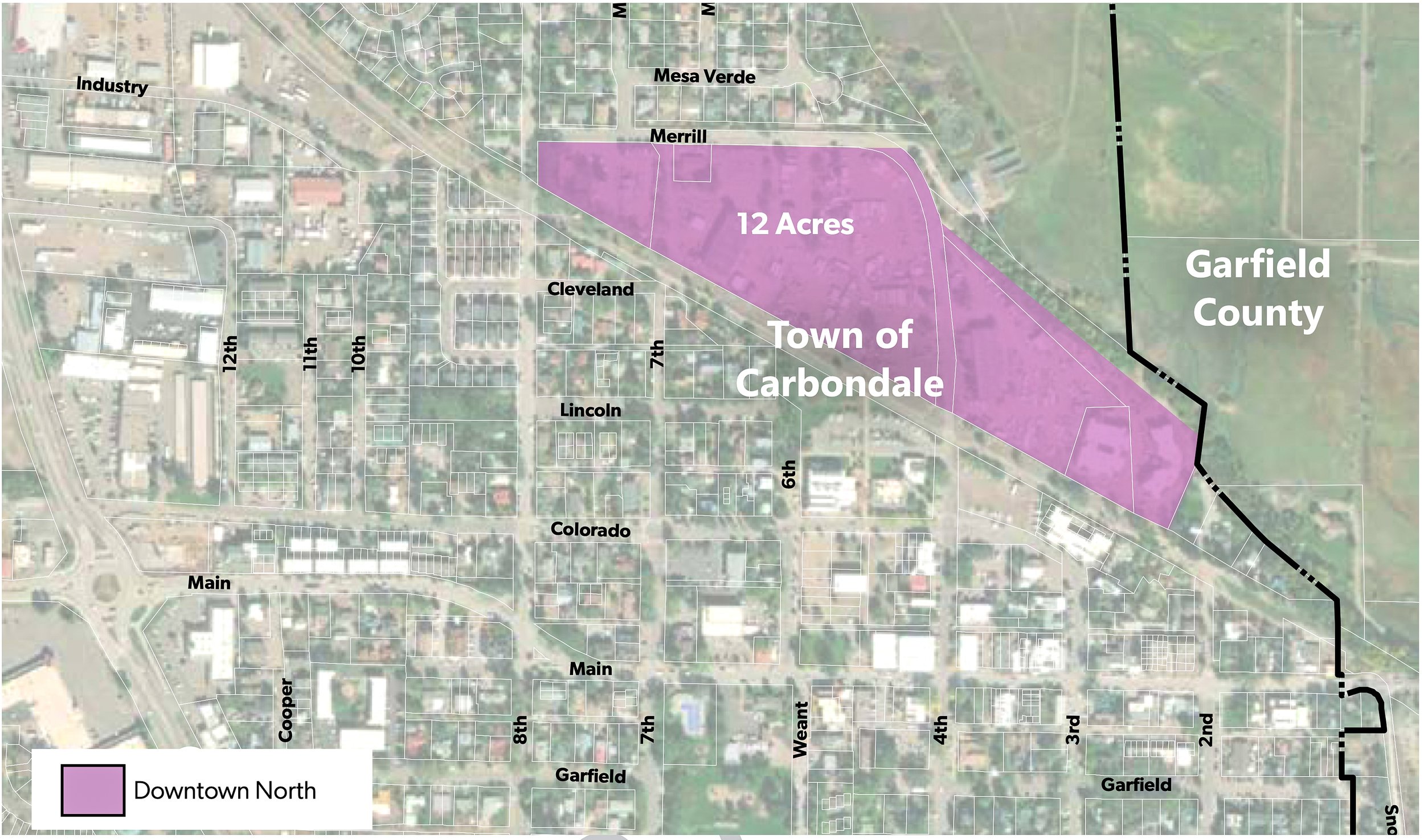 Since early this year, the Carbondale Planning and Zoning Commission (P&Z) has worked closely with consulting firm Cushing Terrell (CT) to update the Town’s 2013 Comprehensive Plan (Comp Plan). Five components of the plan were identified for review, one of which was the plot of industrial land known as Downtown North.

The 12-acre Downtown North parcel once housed maintenance facilities for the Mid-Continent coal-mining operations. Since then, it has been the site of a number of enterprises, notably the large Distinguished Boards and Beams lumberyard.

Downtown North occupies a roughly triangular site just north of Carbondale’s central core, bounded by Merrill Avenue to the north, the Carbondale Nature Preserve (dog park) to the northeast and east and the Rio Grande Trail to the southwest; a small portion abuts Eighth Street on the west. It constitutes a large piece of nonresidential land between downtown and residential neighborhoods north of Merrill and currently is zoned “light industrial.”

The site has been the focus of plans for residential development in the past, notably the Overlook Neighborhood project proposed by the C’dale LLC development group just before the onset of the 2008 recession; it was never realized. The 2013 Comp Plan left unresolved the future disposition of Downtown North, but interest has grown since then on redeveloping the site.

Included in the methodologies CT employed to help formulate their recommendations were public open houses in English and Spanish, a community survey and meetings with community experts (e.g. architects and developers). As part of its Downtown North research, CT met with the owners (i.e. C’dale LLC) of the property there.

In a public survey of several hundred respondents conducted during the summer, the great majority of responses preferred converting the Downtown North area into parkland or some other civic use, such as museums or plazas. The next largest number favored a mixed-use (commercial and residential) approach. Only a small number proposed leaving it as industrial.

Nonetheless, a number of other inputs to the CT team expressed concern about the possibility of losing the industrial jobs there (including what CT termed “the diversity of creative-oriented jobs”). There was also considerable support for residential development on the site.

Key Recommendations DRAFT” at the regular P&Z meeting. Regarding Downtown North, the report recommended that the “site work to create a balance of housing diversity and job creation as part of a new neighborhood mixed-use redevelopment of this property.”

Local builder and real estate developer Briston Peterson is one of the principals of the recently formed MSP Development Group LLC, which has folded C’dale LLC and other entities into its operation. He was involved with the Overlook Neighborhood venture, and more recently his group was responsible for the construction of the both the completed City Market shopping area west of Highway 133 and Main Street Marketplace, a large housing complex being built between the new market and Main Street. The MSP group is also responsible for another new housing complex, Stott’s Mill, under construction south of Highway 82 near Basalt High School.

In a recent interview, Peterson recalled moving to Carbondale 35 years ago and how much he enjoyed living in a (now-demolished) apartment building downtown. He acknowledged that Downtown North (which he called “Carbondale North”) is “a great piece of land” and lauded its “walkability” in relation to the downtown core and its “connectivity with the Rio Grande Trail.”

Peterson went on to describe the “need for a [larger] population base in downtown” and that “a lot of people think that more residential density [could] bring more vitality to the downtown core.” Which, of course, development of MSP’s 12-acre “strategic parcel” could provide.

Still, during this year’s Comp Plan update exercise, “I listened closely to community desires. I’m a big fan of being transparent with the community.” He continued, “To me, my vision of what needs to happen is mixed-use residential. The surrounding neighborhood doesn’t want industrial use.” He saw a need for a “higher level of density — smaller housing units, rentals,” similar to what is under construction at Main Street Marketplace.

That being said, Peterson had no plans to change the current light industrial zoning designation on the Downtown North parcel. “We’re waiting for the recommendations of [the Comp Plan] and will then evaluate the situation,” he said, noting that he was “busy enough” with his other projects at the moment.

The Comp Plan update process is nearing completion, and P&Z will hold two final virtual public meetings on Oct. 27 (Spanish) and Oct. 28 (English). The commission is scheduled to approve the final version of the document in early November. For more information, visit
www.carbondalekaleidoscope.org/chart-carbondale