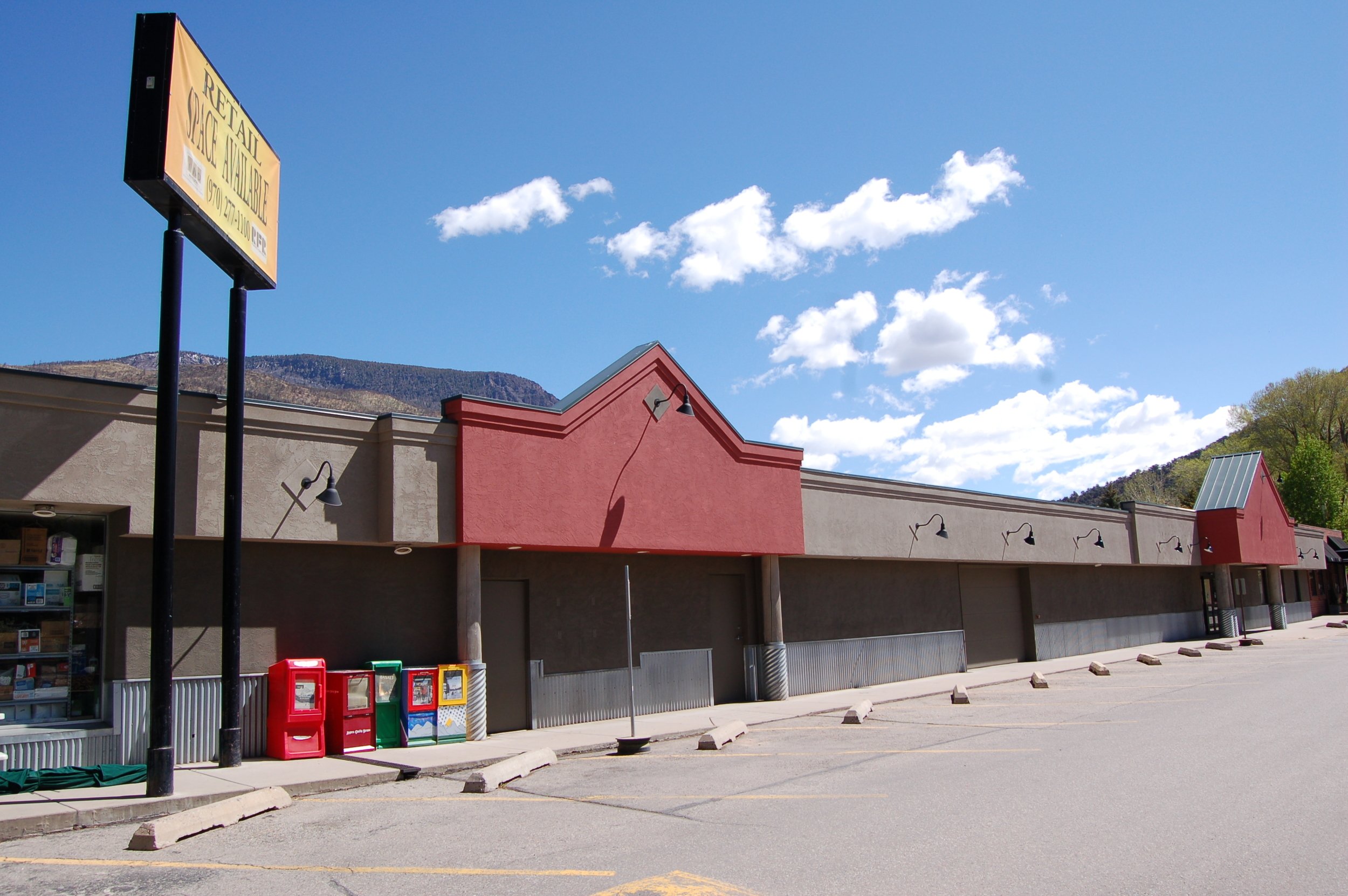 The vacant former Clark's Market space in downtown Basalt could soon be gone. A proposal to redevelop the building, which is also home to Jimbo's Liquor and popular taqueria BLT, was recently filed with the Town of Basalt. Todd Hartley photo.

Despite heaping praise on changes made to the latest sketch plan for the Basalt Center Circle Development on Oct. 26, Basalt Town Council again voted to continue the public hearing phase and delay a vote on the project’s approval. That means that BCC Basalt LLC developers Tim Belinski and Andrew Light will have to return to the Town Council’s next regularly scheduled meeting on Nov. 9 to present further refinements.

Redevelopment of the 25,000-square foot space, long vacant after being occupied by City Market and Clark’s Market, calls for the entire site to be scraped for construction of a new three-story building that would house a 9,000-square foot grocery store, smaller shops, a plaza for outdoor gatherings and 67 units on the two top floors. The developers increased the number of rent-capped apartments to 25 percent of the total.

The Planning Department had recommended sketch plan approval. Public comments after BCC Basalt’s presentation were mostly supportive. First up to speak was Frank Taverna of Carbondale, who owns the land on which Basalt Circle Center would be developed. “We embrace this plan,” he said. “It’s long overdue.”

Council members also gave the sketch plan a favorable reception. “I will vote in favor of the resolution to approve,” Mayor Bill Kane announced, perhaps anticipating that council action was imminent. But, after a long pause, the motion to approve was not made. It became clear that Belinski and Light still had some work to do to put council members’ concerns to rest.

Chiefly there are three. Although the project’s architect, Scott McHale, reduced the number of stories from four to three and redesigned the façade to be “western in character,” Councilor Gary Tenenbaum wondered if more could be done to “break up” the building’s profile, as in Old Town Basalt. The proposed building’s mass and its height (reduced from 49 feet to between 39 and 45 feet) drew the most critical reaction during the public comment portion of the meeting. “This building is such a huge space with lots of people,” said Andrea Morales of Basalt. “It looks like a huge chunk of Willits landed in Old Town Basalt.” Belinski said that reducing the height further could impact the apartments, but that BCC Basalt would consider it.

Another major sticking point was the developer’s stipulation that apartment leases would run for “six months or longer on 60 percent of the units.”

“So what about the other 40 percent?” asked Councilor Ryan Slack. He was concerned that leases for stays as short as 30 days would be possible. Belinski explained that short-term rentals were seldom available in his other apartment developments but that they needed to be available “for hardship reasons.” “Our object is to promote long-term rentals for people who will contribute to our community,” said Councilor Bill Infante. He and other councilors asserted they did not want them available for someone who wants to vacation in Basalt for a month.

The third sticking point for council members is that the 56 parking spaces, some of them covered, seem insufficient for dense, mixed residential and commercial usage. On the other hand, Tennenbaum observed that adding more parking would “detract from the outdoor area.”

Despite these objections, Town Council seems poised to give BCC Basalt the go-ahead to submit final plans at its next meeting. “This is precisely the application called for in the Comprehensive Plan three years ago,” said Mayor Kane. “Our citizens want this,” he said, adding that it is “completely consistent” with what has been called for. “It is far and away the best thing we’ve seen.”

Squeezed into the Town Council’s packed agenda was Youth Zone Executive Director Jami Hayes’ presentation of the organization’s school partnerships to address truancy, and its trauma risk assessment for young people and adults living between Aspen and Parachute; free fare that will go into effect Nov. 22 within the newly combined Roaring Fork Transit Authority’s (RFTA) bus zone for El Jebel and Basalt; a unanimous motion to approve the appointment of Reid Haughey to head the Parks, Open Space and Trails (POST) Committee; a unanimous motion to approve Councilor Elyse Hottel’s recommendation that the council sign a letter from municipalities supporting the federal Antiquities Act’s protection of significant public lands like Bears Ears; and unanimous approval of Colorado’s $400 million portion of the national opioid crisis settlement. The five-county region of Garfield, Eagle, Pitkin, Summit and Lake counties would receive more than $5 million for opioid abuse treatment.

The final business was an executive session, closed to the public and press.