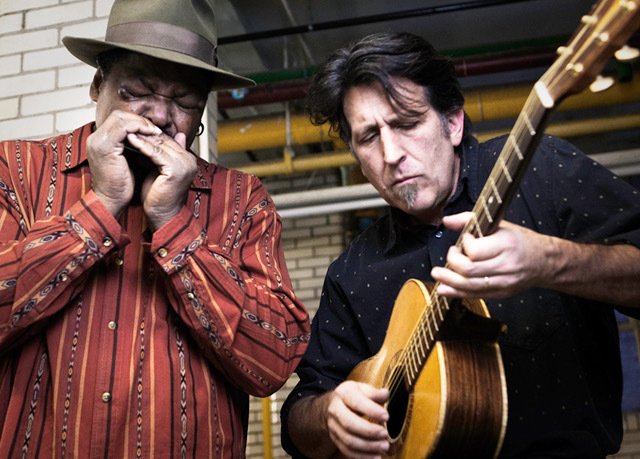 Phil Wiggins was half of the internationally acclaimed “Cephas and Wiggins” for 35 years. George Kilby Jr worked for 20 years with the legendary pianist Pinetop Perkins of Muddy Waters band. Not long after Pinetop and John Cephas passed away, Kilby and Wiggins met at a blues festival and soon recorded Kilby’s classic You never see the hand throw the Stone. Their partnership includes countless US and European tours and festivals, songwriting collaboration, and a brand new album.

Wiggins honors include the National Heritage Fellowship Award, the highest honor awarded to Blues/Jazz/Folk musicians by the USA. He has played Carnegie Hall, Royal Albert Hall, and the White House. Kilby’s honors include a WC Handy Blues Album of the year with Perkins, the Newport Jazz Festival, and others. He has 4 CDs as a solo artist

George and Phil also perform “Racism, Reconciliation, and the Blues”, which is a spoken word and live music experience focused on the problem of racism. As a black and a white musician, growing up in Alabama during the Civil Rights Era, they are uniquely qualified to speak about their experiences and frame the program in the rich cultural backdrop of the blues. Their current album also follows this path with many songs on social change, instead of recycling old blues themes.