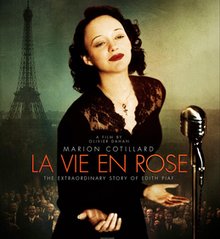 The great Edith Piaf (Marion Cotillard), one of the iconic figures and voices of 20th century France started performing at an early age and soon became one of the world’s most renowned entertainers, followed by crippling battles with alcohol and drugs. Born into poverty, Piaf was abandoned by her mother and shuttled between her brothel keeper grandmother and circus performer father. While singing for pennies on street corners, she one day attracts the attention of Louis Leplée (Gérard Depardieu), owner of one of the poshest nightclubs in town. Soon she is the toast of Paris, with a soaring, deep-throated voice that came to symbolize a certain kind of tenacious humanity, a willingness to go on no matter what the odds.